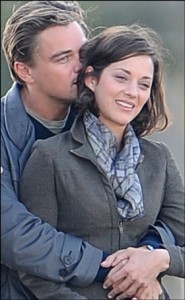 I don’t generally write the feminist articles here at OTI. (If you want to read a traumatic but ultimately thought-provoking comment thread, check out the time I argued that  Showgirls isn’t so bad after all.) But I couldn’t help but notice that Christopher Nolan really loves killing off his female characters to motivate his male characters. Let’s roll the tape (lots of Nolan spoilers to follow):

The one movie that doesn’t fit the pattern is Batman Begins. But of course, the love interest dies in the sequel. And there is a dead mom to tide us over. 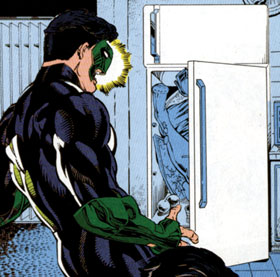 Shana, our resident feminist/Lostologist, introduced me to a name for this plot device: “fridge stuffing.” The term comes from a notorious issue of Green Lantern from 1994, in which Kyle Rayner came home to find his girlfriend not merely dead, but stuffed into his refrigerator. I can’t help but speculate as to WHY the villain, who is eye-rollingly named “Major Force,” would stuff his victim into a refrigerator. If he intended to eat her, the freezer is the way to go. If he wanted to hide the body somewhere no one would find it, this seems like a poor strategy; Green Lantern gotta eat. My best guess is that he wanted to instill a fear  of refrigerators in his enemy, so that Green Lantern would slowly starve to death. Think about it: if you opened a refrigerator to find your girlfriend’s dead body in there, you would have second thoughts about opening a refrigerator ever again. You’d be living on pasta and soup for a while.

You know what? I have to Google this.

Okay, from the single page of the comic I found, Major Force leaves a note on the table that says: “Surprise for you in the fridge. Love, A”  “Huh,” says Kyle. “Handwriting looks funny.” This was just silly on Major Force’s part. Was the Major honestly worried that, were it not for this note, Alex’s body would never be discovered? Can we all agree that however great Kyle’s shock, it would be that much greater if he sat around the apartment for two hours, watching ESPN and leafing through his mail, before he finally got up to see if there were anymore Coronas in the OH SWEET MOTHER OF MERCY!!

Hey, I wonder what Major Force did with all the food that was in the fridge? 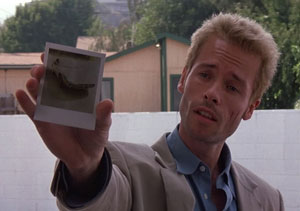 Wait, what I am supposed to be writing about? Let me check my tattoo… oh right.

Now technically, not all of Nolan’s movies rise to the level of fridge stuffing. It’s my understanding that the cliché require that the female character be a real character in the story, that the audience kind of likes, and who is sacrificed so the male character has something to brood about. In Memento, Insomnia, and Inception, the girl is dead before the movie starts. Her identity is defined by her death… which isn’t exactly feminist, but isn’t quite fridge-stuffing. The death of Rachel Dawes in The Dark Knight qualifies, because we’ve had plenty of time to know Rachel before she gets exploded. 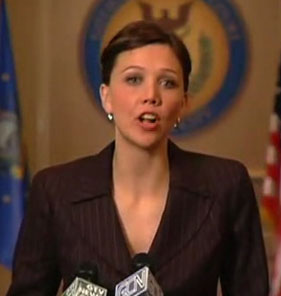 But no matter how much we dislike any given cliché in the abstract, you can always find counter-examples in which the cliché works brilliantly. After all, it wouldn’t be a cliché in the first place if it didn’t work. The Dark Knight is a perfect example. The death of Rachel Dawes is surprising, effective storytelling, moving the plot forward on several fronts. Shana was as enamored with this movie as any of us, despite the sad fate of the movie’s one female character. If you grade The Dark Knight as a work of feminism, it may not do very well. If you grade it as a movie, different story.

In fact, I love all of Christopher Nolan’s movies, and I wouldn’t change them one little bit. That’s what makes this article tricky to write: I don’t know what my thesis is. I have an observation, but I’m not sure how I feel about it. I think it’s clear that Christopher Nolan prefers male characters to female ones, but I don’t think he’s misogynistic. There are great parts for women in Memento, The Prestige, the Batman movies, and even Inception. I suppose there’s a soft misogyny in the way these men are haunted by angelic, sexualized ghosts. It’s kind of Dante. But Christopher Nolan isn’t Michael Bay. Hell, I can’t even recall a sex scene or nudity in any of his work.

So yeah, I don’t think Nolan is sexist. I DO think he has a fascination with dead love interests. Don’t bother searching his Wikipedia page; there’s no dead mother, sister, or girlfriend in his past. Besides, as Wrather noted on this week’s podcast, that kind of psychological determinism is seldom true in real life.

Maybe these dead ladies are an accidental byproduct of the noir world he likes to work in: if you love grim, driven men of action, you need to manufacture something for them to be grim about. The man who actually wrote that Green Lantern story eventually addressed the “woman in the fridge” controversy, saying:

To me the real difference is less male-female than main character-supporting character. In most cases, main characters, “title” characters who support their own books, are male.

There’s some truth to this. The movie is called The Dark Knight, and if taking away the only woman the titular character has ever loved isn’t fair game, what is? 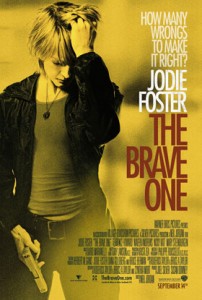 And yet, it’s definitely true that, even when there are stories centered on women, you don’t see a lot of men stuffed in fridges. At the beginning of Kill Bill, Uma’s fiancé is slaughtered in front of her. But you really don’t get the impression that’s what she’s upset about when she wakes up. It’s unclear whether she even cares about the guy. What really drives her is her lost baby… which isn’t particularly feminist, actually. I asked the Overthinkers to suggest situations where a woman is out to avenge her dead lover. McNeil recalled The Brave One, a Jodi Foster revenge flick. Shana mentioned the Sun/Jin story arc on Lost, but with the disclaimer that it petered out pretty quickly.

(To bring it back to comic books for a second, someone made the interesting observation that when male superheroes die, they are often brought back to life with their powers restored. But when female characters die, their deaths are treated as a permanent tragedy.)

So while there’s nothing wrong with a story about a dead woman and the man who avenges her, there is something problematic about how commonplace and effective that trope is, and how seldom we see its gender inversion. There’s a Law & Order: Special Victims Unit, but there’s no Bros Avenging Bros Unit. 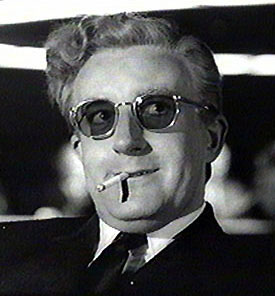 Or maybe there’s nothing problematic about it at all. Maybe we, as a species, are programmed to be more upset by the death of a woman than the death of a man. Remember the end of Dr. Strangelove, when he explained that in the mineshafts, the ideal ratio is ten women for every man? He has a point. When human existence is in jeopardy, protecting the women is smart evolutionary math – they are capable of producing fewer children, and therefore are the limiting factor in propagating the species. I’m sort of kidding, but I’m sort of not: men and women are different. Maybe it’s in our DNA to care more about the death of a woman than a man.

Still, even if my crazy theory is correct, it doesn’t mean fridge stuffing can’t be misogynistic. The writer is basically deciding that there is nothing that character can do that would be more interesting than getting butchered. That any possible plotlines she could be a part of wouldn’t be as effective as her funeral.

But then AGAIN, I’m certainly not arguing that it’s always wrong to kill off a female character.

Ag, I give up and throw it out to you. Is Christopher Nolan guilty of any sort of sexism? When is killing off a supporting female character wrong, and when is it fair game? If you were going to kill your arch-enemy’s lover and hide the body for him/her to find, where would you put it?

59 Comments on “Does Christopher Nolan Have a Woman Problem?”