Conventional wisdom has it that “word of mouth is the best form of marketing.” This is kind of like saying water is the best way of hydrating the human body: it’s obvious until someone starts getting paid to make alternatives. You might reverse it and say marketing is a crappy way of imitating word of mouth. And it is. Celebrity spokesmodels, touting buzzwords as virtues, are cheap imitations of the recommendation of a friend.

If Clay Shirky were talking about marketing instead of picking up kids at daycare, he’d say that marketing isn’t as good as word of mouth because marketing slaps a price structure on top of what was once a generous exchange of information. Marketers imitate friendship. But because friendship’s rather precious, they have to pay someone – a publisher – for the privilege. The publisher has to, in turn, find a way to get the marketer’s message to as many viewers as possible. This is a slow and inefficient process.

Suddenly, the multi-billion dollar marketing industry (creative, powerful) is now hitched onto the process of word of mouth (friendly, trustworthy). What’s more, it’s accelerated by the speed of the global fiber-optic communications network (fast, reliable). It’s like the dead are besieging Asgard in Thor’s magic chariot, as opposed to a ship made out of fingernails (ick).

The three most powerful forces in the world – marketing, community and the Internet – have joined forces to make sure you know what Isaiah Mustafah smells like. 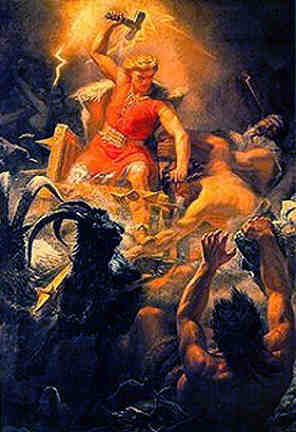 Why is this so dire? Because there’s no going back from it. Every producer of consumer packaged goods, the next time they sit down to renew their ad agency contract, is going to say, “We want to make a really cool video. One that’ll go viral. You know, like that Old Spice ad.” And since ad agencies justify their budgets by beating their competitors, they’ll have to come up with something even more eye-catching to top Old Spice.

How do you come up with something more entertaining and shareable than Isaiah Mustafah? I have no clue. I couldn’t have conceived of such a commercial in the first place. But I can’t stop watching it. That weird blend of charisma, absurdity and ironic earnestness have lodged in just the right corner of my brain. And 14 million YouTube users agree with me.

In less than ten years, commercials will be nonsense slurs of random images, non sequitur dialogue and explosions. Marketers will spam the Internet with thousands of ads in a day, hoping that one will go viral and validate their budget for the fiscal year. Trunk lines will groan with the effort of funneling videos of arm-wrestling pandas selling Pringles, plush UFOs with googly eyes touting Old Navy and the inimitable Geico Gecko.

And the World Serpent will uncoil its tail, Fenrir will break free from its subterranean prison, and the Fimbulwinter will begin.