Ever since reading David Foster Wallace’s Infinite Jest, I’ve been on the lookout for the commercial that will destroy America.

For those who haven’t read his po-mo doorstop, it describes (among other things) an escalating war of outrageousness between TV ad agencies at the end of the 20th century. It culminates in an ad for a hygienic tongue scraper. Wallace describes an ad in which a pedestrian is offered a lick of a sidewalk vendor’s ice cream cone by a cute meter maid. As horrible as it is, he describes it in sentence fragments:

The lingering close-up on an extended tongue that must be seen to be believed, coat-wise. The slow-motion full-frontal shot of the maid’s face going slack with disgust as she recoils, the returned cone falling unfelt from her repulsion-paralyzed fingers. The nightmarish slo-mo with which the mortified pedestrian reels away into street traffic with his whole arm over his mouth, the avuncular vendor’s kindly face now hateful and writhing as he hurls hygienic invectives.

These ads shook viewers to the existential core […] V&V’s NoCoat campaign was a case study in the eschatology of emotional appeals. It towered, a kind of Uber-ad, casting a shaggy shadow back across a whole century of broadcast persuasion. It did what all ads are supposed to do: create an anxiety relievable by purchase. It just did it way more well than wisely, given the vulnerable psyche of an increasingly hygiene-conscious U.S.A. in those times.

The fictional NoCoat advertising campaign is the most singly effective ad campaign in the history of television and it destroys the television industry. It creates in its audience a terrifying compulsion to buy the advertised product. At the same time, it repulses the audience so much that no one’s willing to watch TV anymore. 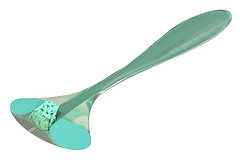 The form of the destructor.

Ever since reading Infinite Jest (which I did only recently), I’ve been watching the growing Sturm und Drang surrounding commercials with fascination. For one thing, they have continued to escalate anxieties much as Wallace predicted. Consider the really creepy Super Bowl commercials in 2010. Or the gloomy Tiger Woods Nike commercial, which (figuratively) flagellated Tiger Woods for his sins. Commercials have always played on fears and desires. But it seems, of late, that their messaging has gone (to paraphrase The Simpsons) from the subliminal to the liminal, and perhaps as far as the superliminal.

But one thing that Wallace never predicted was the notion of viral commercials.

For the first hundred years of spectrum broadcast media, commercials were an unwanted burden. They were accompanied by jingles meant to trap them in your head. They were accompanied by gorgeous models and celebrity spokesmen. As the commercial airspace grew more crowded, they escalated the ridiculousness of their imagery. And no one was immune to their effects. The same cynical hipsters who laugh at Hummer commercials fall for the slick packaging of Apple products. The Midwesterners who snicker at products for feminine needs still order more Budweiser than any other beer. Commercials are like pollution – the price we pay for the wealth of entertainment. Nobody likes them, but we could not have as many shows and movies as we have without them.

Around the dawn of YouTube, however, the younger and nimbler ad agencies realized something. “Hey,” someone said, “if we make a commercial that’s ironic enough to appeal to the 18-35 demographic, they’ll circulate it for us. And people will watch it voluntarily!” Enter the viral video.

Look at your hand. What’s this? It’s a talk by Clay Shirky, author of Here Comes Everybody, given at TED in June 2010.

Look again. The talk is now a prophecy of doom.