SPOILER ALERT: This post reveals significant plot details for the first third of Knight and Day, details that the trailers and commercials have done a very good job of keeping from you. No major spoilers are involved, but If you haven’t already seen the movie and you don’t want the inciting incident ruined for you, you may want to hold off.

By far one of my favorite articles ever published on Overthinking It is Matthew Belinkie’s explanation of the “Ghost Ship Moment.” This is a great article because it doesn’t just explore one movie in unnecessary detail, it gives readers a tool with which they can explore a number of movies in unnecessary detail. Belinkie doesn’t just give the reader a fish, he teaches them how to fish.

(To review: a Ghost Ship Moment—aka a Moment of Recognition—is when the information of the protagonist catches up to the information that the audience has going into the movie, based on the title, a plot synopsis, trailers and reviews. A classic example is Stranger than Fiction: when Harold Crick starts hearing Karen Eiffel and realizes he is a character in a novel, he finally understands what the rest of us watched the movie to see)

Understanding how this concept is used in movies can be quite entertaining. In Shaun of the Dead, Edgar Wright plays with how long he can keep his protagonists from reaching the Ghost Ship Moment. We know that there will be zombies in the movie, but the GSM doesn’t arrive until we have already seen zombies, seen Shaun see zombies and then seen Shaun and Ed fight zombies, not really having any awareness of the fact that they are actually in a zombie movie. This is a plot conceit from which a considerable amount of both comedy and social commentary are derived.

So typically, yes, the protagonist reaches a point where they realize what kind of movie they are in; at the very least the genre or the main plot, if not all of the important details. From there on, they know how to act, be it to chase after the girl of their dreams or run away from the man from their nightmares. But what if a character was wrong? What if the protagonist figures out what they have just gotten themselves into only to then be proven completely incorrect in their assumption? You would have the only interesting aspect of Knight and Day, that’s what.


Imagine this plot synopsis for a film: June Havens (Cameron Diaz) is a beautiful woman who rebuilds classic cars for a living. Unfortunately, she always plays her life safe, never doing any of the exciting things she has dreamed of doing, like traveling to exotic lands … or falling in love. At the airport on the way to her sister’s wedding, June accidentally bumps into the dashingly handsome and charming Roy Miller (Tom Cruise) twice, and then finds out that the two are on the same flight. Is this fate bringing them together? And if it is, will June finally take the chance she’s been afraid of taking and throw herself into Roy’s arms?

It’s fairly obvious, from this synopsis, that the film in question is a pretty mediocre looking romantic comedy. It’s about a gorgeous woman with a unique job and an obvious character flaw that is the reason she’s single. She’s on her way to her sister’s wedding—a classic rom-com set-up—and through a series of coincidences she meets the man of her dreams and has to take risks she usually would avoid to snag him. Even the cast fits, as Diaz and Cruise would be perfect for this sort of film. Also, the main character’s name is June and her sister’s name is April, which is bad even by typical rom-com standards.

There’s just one problem: Knight and Day isn’t a romantic comedy. Anybody who’s seen a trailer or a commercial knows that it’s an action comedy. Yes it has romantic undertones, but really the action is the skeleton and the comedy is the flesh. I guess the romance is the blood, if that metaphor makes sense at all. Anyway, the point I’m getting at is that June Havens is not a romantic comedy protagonist. But she doesn’t know that.

June’s misconception about the type of movie she is in leads to the most interesting part of the film, which is the Red Herring Ghost Ship Moment (RH/GSM). June is on a strangely empty plane, sitting near Roy, of whom she is clearly enamored. She starts talking about all of the places she wants to someday visit, making it clear her character flaw of cautiousness (a classic rom-com protagonist flaw). Roy starts telling her that he has been to all of those places and more, and it’s clear that he has the exciting life she dreams of. “Someday means never,” he tells her, criticizing her caution. She realizes that if she doesn’t take what she wants she’ll never get it. And she wants Roy. 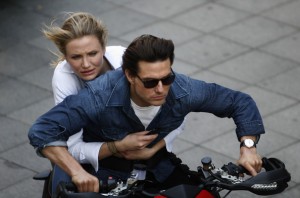 Of course, outside of June’s perspective we are given a significant amount of information that confirms that we are watching an action movie. We learn that Roy Miller is on the run from some sort of government organization, and we’re relatively certain they want to kill him. We suspect that his accidental run-ins with June are no accident, but we don’t know exactly how she fits into the story. What we do know is that this movie is no romantic comedy.

Which brings us to the RH/GSM. While chatting with Roy on the plane, June excuses herself to go to the bathroom. The scene that follows features some incredibly clever cross-cutting between two very different scenes. In the bathroom, June is talking to herself, trying to convince herself to go out there and make her move on Roy. She thinks this is her Ghost Ship Moment, and she is in a movie in which two strangers meet through acts of fate and one of them has to take a chance and go after the other. Outside of the bathroom, Roy is involved in a fight with every passenger and crewmember on the plane, stabbing and shooting everyone in his way. By the end of the scene, June has decided to go out there and kiss Roy, and everyone other than the two of them is dead, including both pilots.

When June comes out of the bathroom, she is oblivious to the dead bodies around her, and she does indeed kiss the crap out of Roy. She is so convinced that her story is a romantic comedy that she cannot deal with the action movie reality. When Roy tells her that there is a problem, her first assumption is that Roy is in a relationship, which is a totally reasonable leap to make in a romantic comedy. Two strangers with great chemistry meet via fate, so naturally there has to be conflict. In a rom-com world, one of the protagonists being in a relationship is a disaster.

Of course, this is an action movie, where the stakes are much higher, and the problem to which Roy is referring is the fact that he will have to land the plane himself. Also bad guys are trying to kill him, and they now probably think that June is working with him. Makes the conflict that would arise from Roy being in a relationship pretty slight, right? But June is so entrenched in her rom-com mindset that she starts laughing, unwilling to believe the situation that she is in. This may sound unrealistic, but it’s a perfectly reasonable reaction considering her genre. Imagine if Mathew McConaughey went to tell Jennifer Garner that he was in love with her in Ghosts of Girlfriends Past and finds her in the process of defusing an atomic bomb. It would be totally at odds with both the character’s and the audience’s assumptions and not make any sense.

So when Roy lands the plane and drugs June, and she wakes up in her old house in Boston, she tries desperately to return to the romantic comedy in which she thinks she belongs. The next scene takes place at a dress shop where June is trying on her bridesmaid’s dress, which is a classic setup for a rom-com scene. But when government agents swarm around June, abducting her from the shop and telling her that Roy is a rogue agent, she is again violently pulled from rom-com territory into action movie land. The car chase that ensues is the real Ghost Ship Moment of the film, because June finally realizes what we already knew going in: she is involved in a high-stakes espionage thriller involving a rogue agent and lots of explosions. 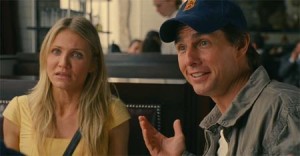 June has one last moment where her life veers into rom-com territory, and again Roy interrupts it with his guns and shouting. June runs to her ex-boyfriend Rodney for protection. This makes sense because Rodney is a firefighter, a figure we associate with safety. Unfortunately, Rodney has not been through everything that June has, and also thinks that the situation they are in is a romantic comedy. If we assume that in everyone’s life they are the protagonist (a fairly safe assumption, I think), then his movie is about a regular Joe who gets a second chance with the love of his life, whom he let get away because he wanted to get engaged and she didn’t. June is frustrated at Rodney’s inability to process the information she is giving him, even though she was dealing with a similar situation in the exact same way just a few scenes before. Fortunately, Roy comes in and grabs June, proving to Rodney that he is nothing more than a distraction from the real story.

It is always very difficult for a character to come to terms with the fact that the movie they are in is entirely different from the movie they think they should be in. Usually this conflict arises from the interweaving of fiction and “reality” in a movie, such as when Jack Slater realizes that he is a fictional character in Last Action Hero or when Tom Baxter walks out of the screen, absolutely baffling Cecilia in The Purple Rose of Cairo. But Knight and Day is not a meta film, making this conflict more unique and more intriguing. Unfortunately, once the real Ghost Ship Moment is established, that conflict is dropped, and the film becomes a straightforward action comedy with romantic undertones. Still, the way the film plays with the idea of the Ghost Ship Moment, and the tropes of romantic comedies and action movies, makes for a very entertaining first third of a movie.

P.S. If you only read this article because you were hoping I’d explain why this movie is called Knight and Day, I’ll oblige, although you’ll probably be disappointed. Tom Cruise is a rogue agent because he stole a small battery that never runs out of energy, which he refers to as the most powerful self-generating energy source since the sun, hence “day.” He hides the battery in a small plastic figurine of a medieval knight, hence “knight.” Also, it’s revealed near the end that Cruise faked his death and changed his name to Roy Miller, but his real name is Matthew Knight. In case you hadn’t realized by now, this is a fairly stupid film. 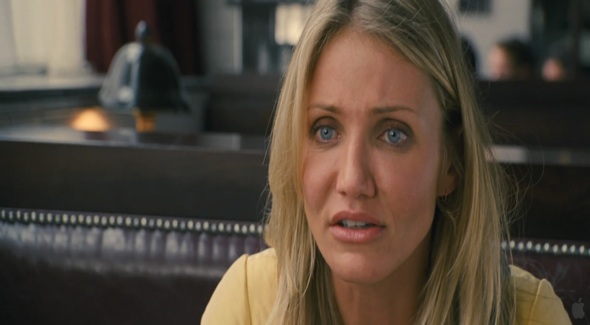 Tom Houseman writes movie reviews and covers the indie film scene for Box Office Prophets. He is compiling his collected writings about film and television at filmdepository.wordpress.com.

5 Comments on “All Day, Half the Knight”