On the block where I work, they’re putting the finishing touches on a new restaurant. It’s got black walls with slogans spelled out in brushed metal lettering, bright red furniture, and a gleaming stainless steel open kitchen. It looks modern and cool. So naturally, I was surprised when I saw the sign go up and discovered it was a Burger King.

Sort of. It’s actually a Whopper Bar, which is like Burger King’s cool younger brother. According to the official website, it’s a “premium dining experience,” and there are only three of them in the United States right now. (The Manhattan location will be the fourth.) When the New York Daily News reported on the Whopper Bar back in January, they made it sound like the whole appeal was the opportunity to buy a beer with your lunch. But in BK’s official press release, they claimed customization was the real attraction:

Sandwiches are built to order by an expert “WHOPPER®-ista” from the WHOPPER® Topper, a visible toppings theater that allows guests to choose from favorites like A.1.® Thick & Hearty steak sauce, smoked bacon, Angry onions and guacamole.

This isn’t your father’s Whopper!

Capitalizing on America’s favorite burger, the WHOPPER™ Bar is a completely new, enhanced spin-off concept of the traditional restaurant with a crisp, modern, bar-like look and feel that utilizes the WHOPPER® sandwich’s flame-broiling as inspiration. Crew uniforms will be transformed, emphasizing the red, black and gray color scheme of the bar setting, and boast a more contemporary cut that matches the look and feel of this bold new approach. Even the product packaging is all new. The sandwich will be served in an upgraded, carton-like box – a necessity when it comes to holding as many additional toppings as guests wish to add. 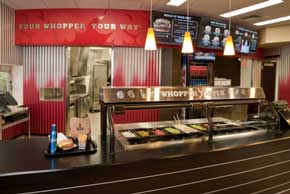 Okay, on second thought, it is actually your father’s Whopper. It’s just that every other aspect of the restaurant besides the burger has changed. (Also, side note: isn’t there a verb tense agreement error in the second sentence? Future tense (will be transformed) vs. present tense (boast)?)

Anyway, let’s see if we can figure out what’s going on with this Whopper Bar.

Burger King, as it turns out, has been doing meh business for most of our lifetimes. After a particularly rough patch in the mid-80s, it was bought by a British company, Grand Metropolitan. Its new owners drove the company further into the ground, and it was put up for sale in 2000. At this point, Burger King was losing a so much money that the Brits gave it away for $1.5 billion, significantly less than the asking price.

So now it’s 2002, and Burger King’s new owners are looking to beef up sales in an attempt to ketchup to McDonald’s. According to this revealing article in The Wall Street Journal, their strategy was to zero in on the “super fans,” 18-to-35-year-old dudes who made up half of the chain’s business:

Burger King tried to distinguish itself from rivals by addressing young men, in particular, like “the cool uncle who tells you how it is,” says John Schaufelberger, Burger King’s senior vice president of global product marketing and innovation.

I wonder if they gave John the job because his name contains the word “burger”?

Think about all those hipsteriffic commercials with The King, and compare him to Kid Vid. Burger King basically made a decision to sacrifice its appeal to kids and families and build its loyalty with the bros. From the article:

“We had multiple marketing meetings where we bemoaned that our kids’ meal sales had dropped dramatically, and that we didn’t have a dessert program, and the company said, ‘This is the way we’re doing it,'” says Julian Josephson, who owns 40 Burger Kings in the West and Southwest.

And for a while, the strategy worked. BK had 20 consecutive quarters of growth. Even considering how badly they were doing in 2000, that’s still impressive.

Then came the Recession. It was a tough time for everyone, but especially 18-to-35-year-old males. (According to one study, 82% of the jobs lost in 2008 were lost by men.) BK’s core customers just didn’t have Whopper money anymore, and its sales fell 4.6% in the third quarter of 2009 alone. During the same period, McDonald’s increased its sales by 2.5%. In other words, people were turning to McDonald’s as a necessity, but giving up Burger King as a luxury.

Meanwhile, one of the hottest food industry trends over the past decade is “fast casual.” These places fill the gap between Burger King and an actual sit-down tip-your-waitress restaurant. Think Panda Express, Panera, and especially Chipotle. I’ll let Wikipedia explain:

Counter service accompanied by handmade food (often visible via an open kitchen) is typical. Alcohol may be served. Dishes like steak may be offered. The menu is usually limited to an extended over-counter display, and options in the way the food is prepared are emphasized. Health-conscious items have a larger-than-normal portion of the menu. Some restaurants may emphasize high quality ingredients like free-range chicken and freshly made salsas. Overall, the quality of the food is presented as much higher than conventional fast food.

As it turns out, all those young men who forsook Burger King haven’t necessarily been eating in all the time. From the Journal again:

People 18 to 34 cut their consumption of fast-food meals from November 2006 to November 2009 while increasing the number of meals they ate at fast-casual chains, says Bonnie Riggs, restaurant industry analyst at market-research firm NPD Group. 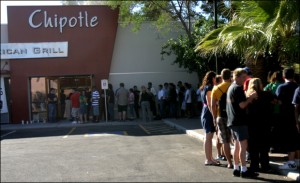 Since fast casual is usually more expensive than fast food, there’s clearly more than the recession going on here. A lot of it is health-related: in this post-Super Size Me world, people are more aware than ever that fast food is a one way ticket to Diabetesville (Population: you and Wilfred Brimley). And even though the burritos at Chipotle are ridiculously unhealthy, people feel like they’re eating smarter, because there’s free range chicken and sexy modern industrial decor. 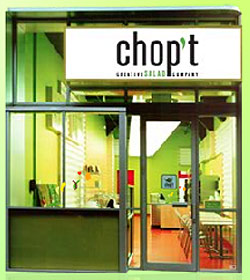 If you want to see where Burger King’s super fans are defecting to, visit a place called Chop’t next to my office. It’s a funky salad joint with items like heirloom tomatoes, Wild Planet tuna, and goat cheese. The earth-toned walls are covered with sans-serif messages about how environmentally-friendly and healthy their ingredients are. Sticking to the fast casual playbook, your salad is prepared right in front of you, by a guy with a special curved blade that looks vaguely Klingon. This place is always mobbed. At lunchtime, the line stretches around the block. And the line is almost entirely 18-to-35-year-olds, who would probably feel a little ashamed slinking back to the office with a Burger King bag.

The fast casual craze has not gone unnoticed by the old school fast food giants. When I started Googling for this article, I discovered that Wendy’s is launching a premium salad bar this week. CMO Ken Calwell makes no secret about their inspiration:

In New York, there’s a salad restaurant called Chop’t, and you will pay anywhere from $7 to $8 to $9 for a salad there. I went in there to get a salad last week and paid $8.85. I waited in line for 27 minutes at lunch, it was a great salad, but I paid more than $8—almost $9—for it. What I’m trying to do at Wendy’s is give you great salads that have those high integrity and high quality ingredients that you can get for $5.99 at every Wendy’s across the country consistently and you can get it in a minute. 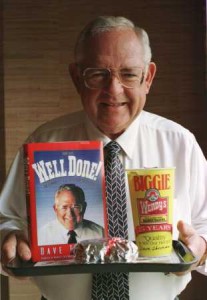 But here’s the problem with that plan: Wendy’s is still Wendy’s. Everyone knows Wendy’s is a fast food place. Everyone remembers kindly old Dave Thomas biting into a strangely square double cheeseburger. Brands do not turn on a dime–even if Wendy’s served the exact same heirloom tomatoes as Chop’t, cut with the exact same Klingon weapon, 18-to-35-year-olds still wouldn’t think of the place as healthy or cool. They’d think of the place as trying to copy Chop’t.

Did you know that for many years, McDonald’s was the majority owner of Chipotle? No you didn’t. They didn’t want you to know.

Building upon their design success in France and the United Kingdom, the new McDonald’s look is sleek and sophisticated, with modern, movable furniture, subdued indirect lighting, outlets for laptop connections, free Wi-Fi and wide-screen plasma televisions. 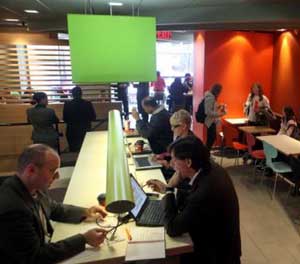 The new McDonald's, believe it or not.

This is a strange development. One thinks of fast food restaurants competing on the basis of price. Five dollar foot-longs! Dollar menus! A bowl of melted cheese for only 17 cents! (In Demolition Man‘s future L.A., Sandra Bullock explains, “Taco Bell was the only restaurant to survive the Franchise Wars. Now all restaurants are Taco Bell.”)

But today, fast food places are seeing their business shaved away by slightly more upscale rivals. Being perceived as ridiculously cheap is a liability with this demo. So to compete, restaurants have to add a little class… without actually raising prices. Perfect example: a few years back, Carls Jr. introduced the Six Dollar Burger. The cost? $3.95. It’s all about creating an impression of quality and an atmosphere of sophistication, without actually changing the menu too much.

And that brings us back to the Whopper Bar. Burger King spent years building its business on bros, who are now defecting to fast casual. So instead of serving the burgers here… 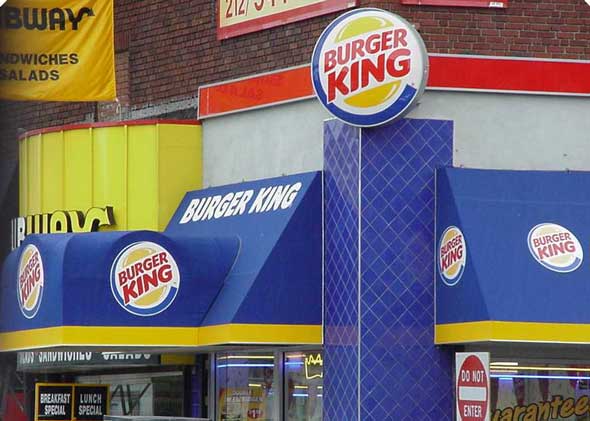 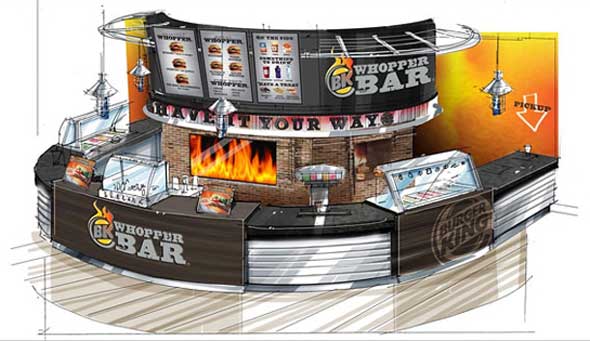 Keep in mind, most of the menu will be the same. There will be a few fancy Whopper variations at the Bar that you won’t find at a regular old BK. But basically, it’s the same stuff. 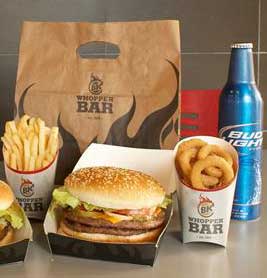 Yes, you can get a beer there.

And that’s why I think this Whopper Bar thing isn’t gonna fly. You see, Burger King obviously didn’t read Wikipedia, and they missed a core aspect of the fast casual thing: the food has got to at least seem healthy. Natural. Wholesome. The Whopper Bar does not seem wholesome. It’s got “Whopper” right in the name. People know that the Whopper is bad for you, and there’s no way around that. The people in line for their St. Tropez salad at Chop’t are not going to start buying cheeseburgers for lunch just because the restaurant looks cool. (Of course, I wouldn’t be surprised to hear that the St. Tropez salad has just as many calories as the Whopper. But it’s all locally-grown organic produce! Swoon!) Burger King seems to think that people are going to Chipotle just because it has cool lighting. But they’re actually going, at least in part, because it seems healthier than the Taco Bell across the street. The Whopper Bar is basically a fancy new wrapper for the same old burger… and nobody goes to a restaurant just for the wrapper.