An army, Napoleon observed, marches on its stomach.  The Overthinking It army, on the other hand, rolls along on cylinders of fresh flour tortilla, stuffed to bursting with a delicious melange of beans, rice, meat, salsa, pico-de-gallo, sour cream, and who knows what else.  Today’s Think Tank will attempt to answers perhaps the most important question facing our society today:  what should I get in my burrito?

We are very pleased this week to welcome a very special celebrity judge!*  Based on your feedback, we may invite** more celebrity judges in the future, so sound off in the comments and let us know, y’hear?

* Note:  no real celebrities were harmed, or involved, in the creation of this blog post.

My mouth is literally watering as I write this.

I was unaware of barbacoa until Chipotle introduced it as a menu item a few years ago. Barbacoa blows away the other meat competition (chicken, pork, beef) for two important reasons: 1) it’s packed with crazy spices (chipotle adobo, cumin, cloves, garlic and oregano) and 2) it’s tender and moist beyond my ability to describe in written words. Notice the pool of grease juice in which the meat resides. That’s concentrated awesomeness. 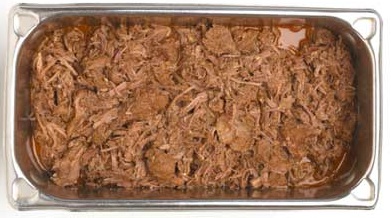 As if I needed any additional proof of barbacoa’s superiority, I brought the statistics with me. Read ’em and weep. For a single 5 oz serving, barbacoa packs the following:

Barbacoa is the leading meat on all three statistics.

But perhaps more important than barbacoa’s standalone prowess is how its abundantly flowing grease juice affects other ingredients. Just like a superstar athlete who makes his/her teammates play at a higher level, barbacoa enhances the other ingredients with its flavor and moistness. It kicks the entire burrito up a notch. Barbacoa. It’s the LeBron James of burrito ingredients.

The basic burrito contains refried beans, Mexican rice and meat of some sort. That’s all a burrito needs to be a burrito by definition. These three ingredients are enough to make the burrito a culinary masterpiece, appealing to such a wide variety of tastes and textures that it becomes baroque. You can dial up various settings on the tri-cornered Spicy / Hearty / Chewy spectrum by adding salsa, additional meats or guacamole.

The genius of sour cream, however, is that it steps entirely outside of the paradigm. You wouldn’t think that a burrito needed something cool, sweet or colloidal in texture. But without sour cream, a burrito’s just mindless indulgence. It lacks the descant, highlighting it at the top of the scale. No burrito is complete without an ingredient that is not spicy, hearty or chewy. And only sour cream fits that mold. 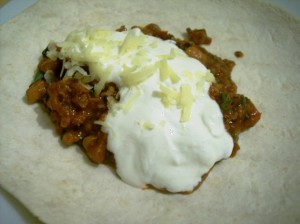 The culinary equivalent of Guernica

A burrito can be assembled without sour cream. But it’s never truly perfect without it.

The greatest recipe in the world has three ingredients, which I will share with you now.
1) Pig.
2) Salt.
3) Time.

The third one is, perhaps, the most important. There are cuts of pork that you can cook quickly.  Chops, loins and the like.  But these are all lazy, flavorless muscles, weak and coddled, responsible for things like maintaining the pig’s posture.  I ask you, does this guy look like he spends a lot of energy on posture? 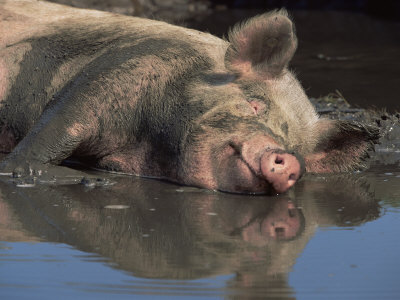 No he does not.

Oh, for a Bavarian hog shank, robed in a sheet of crackling rind, roasted for hours on a spit!  Oh, for a pulled pork butt, baked all afternoon in a smokey North Carolina barbecue pit, until each — individual — fiber — falls melting off the bone!  Chinese “red cooking,” Filipino adobo… it’s all the same thing.  And lest we forget, bacon, which seems to fry up so quickly, spends hours or months in a brine or a smoker before you ever get your grubby little hands on it.  Pig + salt + time.  The regional variations are just icing on the, uh, the meaty, porcine, cake.

Carnitas. The tip of the tongue taking a trip of three steps down the palate to tap, at three, on the teeth — Car. Ni. Tas.  My sin, my soul!  The procedure is similar to American barbecue:  take a hog butt, salt it, and cook it until it loses structural integrity.  The mexican version loses the smoke, and thus, one would imagine, a lot of flavor, but it makes up for it through the judicious application of LARD.  The meat is cubed, seasoned with cumin, pepper, and salt, and then baked in a pig-fat bath. Think slow roasting brings out the flavor?  How about you reserve judgement until you’ve tried slow-deep-fat-frying, because that is really what the process entails.  The result, carnitas, may just be the least healthy, most tasty, substance on the planet.

Now some might claim that I have basically hijacked the Think Tank here.  “Okay, carnitas is delicious, fine. You’ve made your point. Is it really the single most important ingredient in a burrito?”

Well pilgrim, if you put it in a burrito, then yes.  Yes it is.

6 Comments on “What is the greatest burrito ingredient? [Think Tank]”