Yep.  We’re going to rewrite a season of television written by the great Steven Moffat.  If Doctor Who has taught me anything, it’s that extreme arrogance will get you anywhere.  (“This pop culture website!  Is!  Protected!”)  (Alternately: “Wait!  Why are you in charge of this rewrite?”  “BECAUSE I’M VERY CLEVER!”)  (Oh, Tennant.  How I miss you and your scenery chewing.)

Here’s how we’re going to do the rewrite.  First, we’re going to pick the best themes of the eight I listed on the previous page.  Then, we’re going to write new character arcs for the Doctor and Amy so our themes actually relate to our characters and their development over the course of the season.  Finally, we’re going to rework the plots of the thirteen episodes so they aren’t so “all over the place” thematically.

OK: Step 1.  Let’s look at the themes.  “Can Robots Love?” is the first on our list.  It’s an inherently silly theme–watch “Victory of the Daleks” again and tell me that it’s not.  Even if it weren’t silly, we’ve seen this theme handled in science-fiction so many times that it’s old hat.  I say chuck it. “Childhood vs. Adulthood” could be a good theme, but, ehhh, I dunno.  To write a story with such a theme, you’d have to define “childhood” and “adulthood,” and I don’t feel comfortable doing that.  In this season, Moffat and co. defined childhood as “wonder” (“Don’t ever grow up,” Peter Pa—err, The Eleventh Doctor said).  Meanwhile, adulthood was defined as “heterosexual marriage.”  Blah.  Blah, blah, blah.  I throw you away, “Childhood vs. Adulthood” theme!

“Identity vs. Disguise.”  Yeah, that’s a good one.  Moffat liked this one a lot–perception filters and so on–so we’re definitely keeping this one.  “Stories Becoming Real”?  If it’s metaliterary, I’m in!  Though this theme didn’t get much play in the middle of this season, it was big in the season finale, so it has to stay put.  Finally: “Memory & Forgetting.”  That’s the theme Moffat harped on the most throughout this season, so that one has to stay, too.  Orphans, stasis, and especially shrewish females get chucked into the Void. 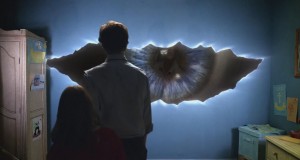 Okay: we have three good thematic topics: Identity, Stories, and Memory.  I like it.  Now let’s figure out what the actual theme of this season is going to be.  Based on “The Pandorica Opens” and “The Big Bang,” I’m going to say that the big theme Moffat was going for was something along the lines of, “A person’s identity–a person’s whole Universe–is based on the stories she tells herself—stories based on her memory (or false memories) of past events.”  That’s a neat theme—a really neat theme, actually.  I wish the season as a whole had supported it.

Now that we have an actual, honest-to-goodness theme, let’s figure out how to relate that theme to the emotional arcs of the main characters: Amy and the Doctor.  “But wait!” you say.  “Do characters even need arcs?”  All right, I’ll give.  No, characters don’t always need arcs.  Not always.  Characters in satires are flat, as are characters in old-fashioned Shakespearean comedies and modern-day sitcoms.  But Doctor Who isn’t a satire, and though this season did end with a wedding, it’s not a comedy.  (It’s not a Brechtian epic, either, smartass.)

No, this show is a romance.  It’s a fantasy.  The main characters need to do the quest thing, start in one place and end in another.  Would you like if Luke Skywalker started out as a whiny, unheroic farmboy and ended up as a whiny, unheroic Jedi?  Would you like Batman if the Joker weren’t there to challenge him to kick things up a notch?  And if you want to bring out the old chestnut, “It’s just a children’s show!” (or the new Moffat-era version: “It’s just a fairytale!”) then I bring you this list: Harry Potter.  The Little Mermaid.  Aang.  Beauty and the Beast.  Dorothy.  Taran.  Children don’t like character arcs?  Bah!  Kids should love character arcs more than anyone—they’re changing all the time!

We all know that classic-era Doctor Who didn’t have character arcs, or, if they did, they were much more subtle than what we saw in the RTD era.  Thing is, classic Who was almost completely episodic.  It didn’t really have much in terms of season-long story arcs.  But we’re in the post-RTD era now.  We got used to having a full season story arc each  year, and we got used to having season-long emotional arcs, too.  Once a show goes that route, you can’t really undo it.  It seems like a step in the wrong direction–a step from art back to cartoon.  (Actually, that’s unfair to cartoons, because lots of modern cartoons have good character development. ) You may disagree with me on this, but, in my mind, the characters in Doctor Who need emotional and developmental arcs. 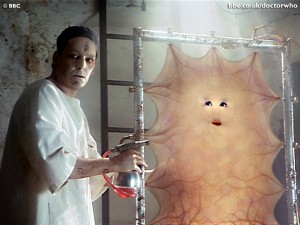 So let’s tie our themes to the character arcs.  Remember, our new theme is, “A person’s identity is based on the stories she tells—stories based on her memory (or false memories) of past events.”  That means our main characters should start the season misremembering themselves and end the season by remembering who they really are.  Then they can have their happy ending.

So what’s the Doctor misremembering?  Well, he’s just regenerated, and he had a pretty crappy time at the end of his run as the Tenth Doctor.  In “Amy’s Choice,” he misremembers himself as an asshole pedophile who abandons people whenever he gets the chance.  I’d say, then, that the Eleventh Doctor’s new arc should be this: At the beginning of the season, he’s super-happy, because he’s just shed his Tenth Doctor baggage, and he’s actively trying to forget all the crap he’s just gone through.  As the season goes on, he’s continually reminded of his past, which is sad, because he’s trying really hard to be Happy-Go-Lucky Doctor.  Then (here’s my favorite bit), he actively causes the Cracks in the Universe to form, because then he can, vicariously through Amy, really start over from scratch.  This turns out to be a huge mistake, and they go and fix it.  Then the Doctor remembers the real story of Doctor Who: He’s the hero, and regardless of how many times he screws up, he’s still a good guy.  He can remember this good stuff and play the part of the hero while still accepting the bad stuff in his past, too. 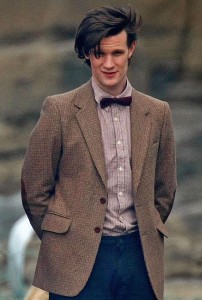 Also, the shower scene stays in.

As for Amy.  I didn’t like Amy this season, because she didn’t seem like a real person to me–more like a cardboard cutout of a sexy, snarky Scot.  However, there were some little rays of hope for her.  First, even though her occupation as a costumed kiss-o-gram came off as slightly sexist, I thought it was a great idea, because it reflects the theme of identity, and it reflects the Doctor.  What is the Doctor if not a person who keeps changing identities in order to be all things for all people?  What’s more, this occupation works on a meta-level, too.  Amy is played by an actress who is playing the part Amelia who is playing the part of Amy who is playing the part of a sexy nurse, a sexy cop, or sexy whatever.  The Doctor is now being played by a new actor who is creating a new character based on an old character who is always changing faces.  This is really interesting stuff!  I wish the show actually referenced it after “The Eleventh Hour.”

Other than her one-dimensional personality, the other thing I really didn’t like about Amy was the whole Rory/marriage plot.  If season five is about Amy learning to accept the story and memory of her childhood and gain a true identity as an adult, why does her end goal have to be marriage?  Is a woman only self-actualized if she’s a shrewish wife?  Honestly, if I were writing this season, I’d leave out the marriage/Rory plot altogether, even if it meant losing the far too clever “something old, something new, something borrowed, something blue” line.

If Amy’s new character arc is to work, it needs to work as a foil for or reflection of the Doctor’s arc.  Let’s say at the beginning of the season, Amy and the Doctor are in the same place: they both are actively forgetting their pasts, and they both want to be happy and have fun.  Later on, like the Doctor, Amy is continually reminded of the crappy times in her past.  The Doctor can basically deal with this, but Amy cannot.  She gets really screwed up.  Therefore, the Doctor decides that, for Amy’s good (although it’s for his good, too), he’s going to create the Cracks in time and let her forget about all of the bad things she’s seen and been through.  Then things go bad and the Doctor fixes it and everyone earns their happy ending.

ON THE NEXT PAGE: Our new, improved season five, episode by episode.