UPDATE: The comments section is now open.  Sorry for inconvenience.  Overthink away, Overthinkers!

[ATTENTION AMERICANS: This article covers all of season five of Doctor Who.  That means there be SPOILERS.  Come back in two weeks and read this after you see “The Pandorica Opens” and “The Big Bang.”  We’ll leave the comment thread open so you can praise/complain about Moffat as you see fit.]

“Nobody does themes. It’s a lie. Who have your heard say ‘I’ve thought of a good theme?’ They happen accidentally. You repeat yourself once too often and so it becomes a theme. We tell stories – that’s what people talk about, not themes.”
–Steven Moffat

Yeah, yeah, I know.  Themes suck.  If you want to send I message, write a pamphlet, or send a telegram.  I know.  I know.

Except I love themes.  I was an English major.  I write for OverthinkingIt.com.  My list of favorite books include 1984 and The Grapes of Wrath.  Give me an allegory or a good, obvious satire and let me sink my teeth into that baby.  Mmm.  Anvilicious!

Many modern folk disagree.  Why should art have themes?  In this postmodern age, all art is considered equal.  Who’s to say that The Wire, with its well-developed, honest themes, is any better than Transformers, which features Megan Fox in short-shorts?  No one, that’s who.  The Wire and Transformers are both diverting entertainments, so they must be equal.

Feel free to disagree with me.  You’re wrong, of course.  Look, I love Indiana Jones and The Last Crusade as much as any of you, but it’s no Ikiru.  Ikiru, in a little way, changed my life.  Indiana Jones?  Did not.  Breaking Bad is objectively better than Burn Notice.  You guys know how much I love Burn Notice.  Even if every episode of Burn Notice had Michael Westen blowing up a floor safe with a toaster, Breaking Bad would still be better.  Objectively.

So.  Back to Doctor Who.

But, dear lord, the man knew how to do some themes.  Each of his seasons had clear thematic, plot, and character arcs.  They were about something.  And that shit moved me.  It really did.

But overall, this season was missing something, and that something was thematic coherence.  Notice what I didn’t say.  I didn’t say series five lacked themes.  As Moffat himself admitted in the quotation at the top of this page, themes come out in literature whether the writer puts them there consciously or not.  If Moffat was being honest when he spouted that quotation, then he went out of his way not to include themes in this season of Doctor Who.  That’s a problem.  It seems to me, that, by not focusing on themes, he accidentally wrote something thematically incoherent and, to be honest, a little bit sexist.

Let me break down the season, episode-by-episode, so you see what I mean.

Okay, so in this season we have at least eight repeated themes:

Some of these themes are related: “Childhood vs. Adulthood” and “Stasis vs. Change” are similar enough, and “Images Becoming Real” and “Identity” could work nicely together.  Others seem to have nothing to do with one another.  Does the big theme of “Memory and Forgetting” have anything to with the big theme of “Women Are Shrews Who Need to Get Married”?  Does the theme of “Orphaned Children” really have anything to do with the issue of robot love?

My problem isn’t only that there were too many themes but also that these themes were completely separate from the emotional arcs of the main characters.  Consider the theme of “Identity & Disguise.”  Great!  I love that theme.  It seems Moffat and co. love that one, too, because about half the episodes this season made use of perception filters, shapeshifters, or robots disguised as humans.  Good.  Identity & Disguise.  I like it.

But, uh, what does it have to do with the Eleventh Doctor?  Sure, he regenerated—you can say his new body is a “disguise”—but Eleven never mentions his regeneration after the season premiere.  His identity doesn’t change much over the course of the season; the Doctor in “The Eleventh Hour” is basically the same Doctor we see in “The Big Bang.”  And it’s not like the Doctor seems to have any problem with his identity that he needs to get over.  The only time he mentions his identity is when he’s bragging about himself.  That’s not really what you would call a “character arc.”  I don’t get it.  What’s the point of having this theme of “Identity & Disguise” if the Doctor doesn’t actually have an identity crisis?

Same goes for the big theme of  “Memory & Forgetting.”  What does this theme have to do with the Doctor?  Has he forgotten something?  No, not as far as I could tell.  Is he repressing or actively remembering his past?  Only in “Amy’s Choice,” and then that character beat is dropped, never to be seen again.  As for Amy… well, she certainly forgot a lot, but although her forgetting affected the plot of the season, it didn’t seem to affect her character in any meaningful way.  The Amy who forgot her parents and the Amy who remembered her parents were exactly the same person with the same one-note personality.  Likewise, the Amy who forgot the Doctor and the Amy who ultimately remembered the Doctor were the same, personality-wise.  Again, what’s the point of having themes if they don’t have a real effect on the development of the main characters? 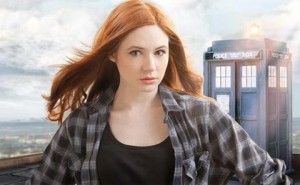 Although who needs character development when you can just wear really short skirts?

I’m not the only one having trouble untangling season five’s themes.  OTI fan Josh wrote, “there’s definitely some sort of commentary being made about the fairy tale genre… In the last episode we got Sleeping Beauty and literally a knight in shining armor.  [Amy] grows much less than the other Companions and her narrative isn’t at all about her association with the Doctor bringing out her inner undiscovered strengths and capabilities or balancing him in any way… She only seems to love Rory when he demonstrates totally self-abnegating sacrifice on her behalf, and loves the Doctor because…well, because he’s a rockstar with a magic wand?  Maybe Moffat is saying something interesting about this and not just being a clod?”  And finally: “Please make sense of all this.  It’s a mess.”

I can’t make sense of it.  It IS a mess.  I’ve seen a few articles recently about how season five is all about fairy tales, but that’s clearly not true.  If you look at my above episode breakdown, you’ll see that only four of the thirteen episodes made references to fairy tales or storytelling.  Even in the season finale, it’s unclear what, exactly, Moffat has to say about fairy tales, except that we like them and it’s good to remember them.  As nice as that theme is, I’m not sure it illuminated anything interesting about any of the show’s characters, or if it meshes well with the other seven themes listed above.  (Also, what’s the point of feeding that moral to Doctor Who’s audience?  If we didn’t already appreciate children’s stories, would we be watching this show in the first place?)

Look: I agree with Moffat to a certain extent.  If you’re a writer, you don’t absolutely have to map out them themes before you start writing.  (Although the guys who wrote The Wire did, and look how that turned out.)  As Moffat himself said, themes will out, naturally—but you can’t just have a dozen writers write a bunch of semi-related stories and call it a day.  Not if you want a coherent season of television.  Not if you want Shana Mlawski as a fan.

No, at some point in the editing process, you need read over your work, say, “Oh, apparently I’m interested in these themes today,” and then rewrite the whole season so those themes actually affect and reflect the emotional stories of the main characters.  In short, if you want to have a theme about what the word “identity” means, then your main characters actually have to go through an identity crisis.  It’s kind of like writing 101.  It seems to me that Moffat didn’t take this extra step, which is why series five seems like a first draft to me.  For a first draft, it’s pretty good, but I don’t watch TV to watch first drafts.  We’re living in a post-Sopranos world, people.  I want art!