Rule #1 of writing fiction in the 21st century: All characters must be likable.  Sure, sure… but what does “likable” mean?  A while ago, I wrote a piece about this subject, but my findings were superficial at best.  “Likable characters have dogs,” I said.  “Likable characters are easy for audiences to identify with and pity.”

Such analysis was not particularly useful to the would-be writer or to most consumers of modern fiction.  What, for example, are we to make of the fact that psychopathic killers like Tony Soprano and Ben Linus are loved by the masses?  Why is it that “whiners” like Neon Genesis Evangelion’s Shinji considered detestable, while sad-sacks like  Eeyore and Charlie Brown get dubbed “lovable losers” and existentialists?  Why do we hate know-it-alls like Wesley Crusher and Adric but love know-it-alls like Spock and The Doctor?  And why aren’t I mentioning any women in these questions?

Clearly, there is a lot more to likeability than I thought.  This week, I’d like to continue my on-going series of “How To Be Likable” by focusing on the following question: Are male characters more immediately likable than female characters?

For some time now, I’ve held the hypothesis that, to the majority of the American population, if not the majority of the population of Earth, male characters are automatically more likable than female characters.  It seemed to me, based on my experience on the Interwebs, that many male characters were given a pass for deplorable behavior while female characters tended to be hated for the vague sin of being “a bitch.”  My hypothesis seemed to be confirmed by my recent experiences reading about Breaking Bad on the web.  I won’t spoil the show for you in case you haven’t seen it, but in the first two and a half seasons, certain male characters have 1. produced and distributed methamphetamines, 2. killed people and allowed innocents to die, 3. attempted rape, and 4. constantly lied to their families and put them in extreme danger (among other things).  One female character, on the other hand, had an affair—weeks after begging her husband for a divorce, which he would not grant.  Guess which character is the unlikable one? 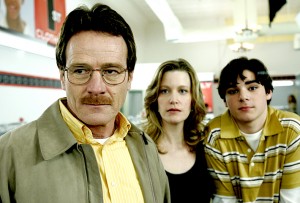 Psst! It's the one in the middle. With the boobs.

Of course, we at Overthinking It don’t base our conclusions on anecdotal evidence.  We’re scientists.  If an article on pop culture doesn’t have a chart, graph, or Excel spreadsheet in it, it doesn’t count.  So I decided to see what science (“science”) had to say about the matter.  Are male characters more likable than female characters?

For my research, I visited Entertainment Weekly, which last month came up with a list of their 100 favorite fictional characters.  (NOTE: There are more than 100 characters on the list.)  These characters came from TV shows , the movies, novels, the theater, and FunnyorDie.com.  Oh, and The Gorillaz are on the list for some reason.  Here’s the breakdown by gender: 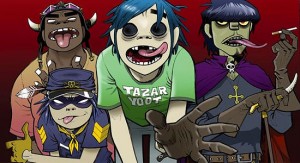 For the record, I didn't count The Gorillaz as male or female.

Passive/reactive characters, on the other hand, are acted upon—the plot happens to them, in other words.  These characters tend to be pitied by audiences, and their actions tend to be less violent.  Examples of “passives” or “reactives” include Truman from The Truman Show and Rachel from Friends.

Beyond the obvious “actives” and “passives” there were also some “unclassifiable” characters.  For example, District 9’s Wikus van de Merwe, started his film as a “reactive” but finished it as an “active.”  He is, therefore, unclassifiable.

Most “how to write” books and websites I’ve read claim that likable characters are always active—no one likes a reactor.  But that’s not how the EW broke down:

According to the EW list, likeability was indeed correlated with active badass-itude, but being active was not a requirement of being likable.

Now let’s see where male and female characters fall on the active-passive continuum.  Before looking at the EW list, my guess would have been that audiences prefer their male characters active and “badass” and their female characters sweetly passive and mommy-like.  Surprisingly, I found just the opposite:

– Tracy Flick from Election
– Amanda Woodward from Melrose Place
-Catherine Trammell from Basic Instinct
– Miranda Priestly from The Devil Wears Prada
– Mary Jones from Precious
– Annie Wilkes from Misery
-Violet Weston from August: Osage County
– Keyser Söze from The Usual Suspects
-Gollum from The Lord of the Rings
– The Joker from The Dark Knight

and yet seven of the ten are women.  That means 17.5% of the women on this list are villain-antagonists, while only 4.5% of the men are.  My definition of a villain-antagonist was a character who did evil things that the POV protagonist did not approve of.  People like Hannibal Lecter and Tony Soprano would be considered anti-hero-protagonists, because one helped out the heroic main character, and one was the main character.  As evil as Tony Soprano can be, audiences identify with him too much to call him a true villain.  (Fascinatingly, there are very few female antihero-protagonists in general, let alone on this EW list–Mary Louise Parker’s character from Weeds immediately jumps to mind–but she’s not only the list.  Damages’ Patty Hewes is.  If you go to TVTropes and look at their list of villain protagonists, you’ll see the number of female characters is negligible.  I have nothing much to say about this fact other than to say it’s interesting.) 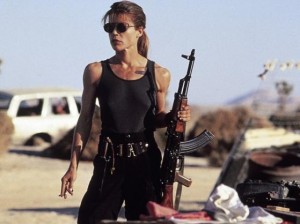 If I don't put a picture of Linda Hamilton in all of my gender-themed articles, my computer explodes.

Anyway.  All of the above data suggest to me that we (or at least the critics at EW) like a wide variety of male character types but prefer our women to be two-dimensionally “badass” and/or evil.  Most great female characters, the EW list seems to say, are doers—not thinkers or losers or comedians or lovable orges or what have you.  Great male characters, meanwhile, range across the entirety of human experience, from Shrek to David Brent to Edward Scissorhands to Eric Cartman to Jules Winnfield to Spongebob Squarepants to Tyler Durden.

An important question remains, however.  Is it that audiences and critics prefer two-dimensional “strong female” characters to “weak-but-interesting” women and girls, or is it that writers don’t know how to write nuanced female characters?  Or do writers know how to write three-dimensional women but avoid doing so for fear of being labeled misogynistic?  After all, the writer of an unsubtle villainness or plain-vanilla action heroine can hide behind the excuse of, “But look!  She’s so empowered!”  Or is it that Hollywood’s female characters have been focus-grouped to death, as A.O. Scott suggested in his (hilarious) review of Knight and Day?  Are writers shackled by the market research that says that likable female characters must be “tough but not aggressive,” “sexy but not actually having sex,” and “willing to fall for a certain kind of guy without entirely losing their heads”?  Maybe we see so many female characters in this bland “Cameron Diaz” rom-com mode nowadays that every time a writer steps slightly out of those boundaries by writing a loathsome Lady Macbeth stereotype or one-dimensional Femme Nikita-type, magazines like Entertainment Weekly fall over themselves to congratulate them for it.

I don’t know.  My guess is that it’s all of the above.  So let me open this question to you, OTI readers.  I’m sure most of you enjoy watching badass characters of both sexes–after all, we humans love our wish-fulfillment fantasies–but do passive/reactive female characters turn you off more than passive or reactive male characters?  If so, why?  Were you socially-conditioned to only enjoy watching women if they act stereotypically “masculine” (i.e., proactive and violent), or do you think that Hollywood’s writers tend to have a hard time writing different types of female characters?