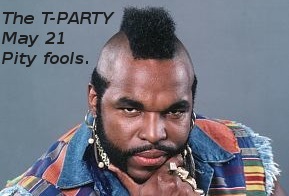 On May 21, Overthinking It held the first ever Mr. T Party, dedicated to the eponymous fool-pitying entertainer and authority figure. Today I’m going to look back at it — what I intended it to be when I first thought of it, and what it turned out to be (which was pretty awesome) — and why the difference matters.

When I conceived of the Mr. T Party, I had four main goals:

Did the Mr. T Party become what I wanted it to become? Of course not! No battle plan survives first contact with the enemy, silly. But it still became something pretty special, as you can see here:

More about this video and more on the first Mr. T Party, after the jump –

The above video was sent to me by OTI podcast listener Kim Crandall, and I’m so fond of it I’m going to post it again.

Here is the text of the e-mail I got from Kim’s to put this in context:

A group of folks at my company got together at lunch in our atrium to
get into the Mr. T Party spirit.

We had a Mr. T photo cake complete with “I pity the fool who missed
this party” text. I then asked people (including our CEO!) to give me
their best “I pity the fool” face/expression, and snapped a photo.
I’ll likely turn that into an animated .gif at some point.

Attached is a photo of the cake, and me doing my very best “I pity the
fool” face. I also have a video of us singing Mr T happy birthday I
can send along, if you’d like to see it!

Thanks for giving me something ridiculously fun to do at work today.

So, this made me immensely happy. Here is Kim’s aforementioned photo… 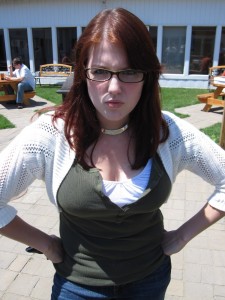 …and here’s the slideshow:

Man, our fans (and podcast listeners, check it out) are the best. Oh, here’s the cake: 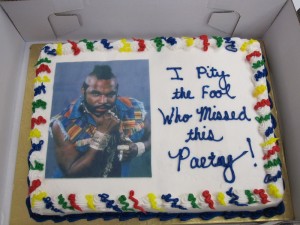 Kim’s example was by far the most exciting and fun demonstration I heard about related to the Mr. T Party, although OTI also talked about it at our live shows during ImprovBoston’s Geek Week and there was quite a bit of chatter on the Twitters that day about it (follow OTI at http://twitter.com/overthinkingit and follow me at http://twitter.com/pffenzel), so I know some other people were in the spirit.

What did all of these things have in common?

No two people seemed to think the Mr. T Party was about the same thing. Not the OTI writers, not our readers, not our podcast listeners, nobody. The one thing people seemed united on was that it was fun and personal — it seemed to bring expressiveness out of people, prompt them to show some of themselves at the same time they were demonstrating what they sort of felt about Mr. T.

Systematic versus systemic thinking and the creative impulse

The distance between my expectations of what the Mr. T Party was going to be and what it turned out to be lengthened for several reasons:

This last bullet is, I think, one place where we find the disjointedness between creativity and criticism. Criticism tends toward the systematic and modular — people being critical often aspire to make points, which combine to form Voltron in layered arguments. People creating things or expressing themselves tend toward the systemic — everything comes out of the system at once, creativity is part of who they are, and you can’t carve one part out of it with the kind of success you might hope for without wrecking the whole thing.

I’m going to make a distinction here that I don’t think I’ve heard before, but maybe I have. I take no credit and offer it without an appeal to its authority:

Systematic thinking is conceiving of systems as the sums of parts — classifying them, breaking them down, understanding them from the bottom up.

Systemic thinking is conceiving of systems as dependent upon the unity and emergent functions of all their parts at once.

Think in strictly systematic terms, and you end up fouling up the system by changing things in isolation that have far-reaching unintended consequences across it. Think in strictly systemic terms, and you end up unable to make meaningful change, because changing everything in a system at the same time with equal and proportional attention to all elements is inefficient to the point of madness.

I thought of the Mr. T Party as a systematic event – putting together different parts of our culture and seeing what result they produced.

The Mr. T Party instead turned out to be a systemic event – the culture responded in accordance with its own overarching terms, as did the people individually involved.

This is I think why Kim’s video is such a great response to the “call to action” and such a wonderful microcosm of what we seek to do when we work in and around the common project of culture — no matter what we think it will do, first, it brings people together to do what they were going to do anyway by virtue of who they are and their personal, complex relationships with culture.

(This is, by the way, why I have no problems with people having barbecues on Memorial Day or sleeping in on Martin Luther King Jr. Day. A holiday is already special – a day off work is how we commemorate important things – it is a systemic part of our culture. We do not need to additionally commemorate it in order for it to matter, and in fact, forcing people to skip their days off in order to do things that commemorate a holiday weakens the cultural role and importance of the holiday and what it stands for, not the other way around.

In other words, people are going to think of Labor more fondly if they enjoy Labor day, and people with a political stake in Labor Day are wise to remember this and not to kill its center while trying to get value on the margins.)

We can criticize how you think people are or ought to live in and create their culture, we can make political plans for it, but it is important to remember that this culture is created as it is lived in real time — that the living of it has already begun. The creative impulse, which is one of the things that prompts us to muddle around with existing symbols that people care about, brings a lot of us with it when it sets out to do its work, and a fully successful Mr. T Party (I consider this one to be partially successful) will find a better way to keep this in mind.

Many thanks to all the folks who participated this year, and we’ll see you next year! And also tomorrow! Because we hope you read our website every day! Because it is awesome! And so are you!

Did you do something for the Mr. T Party and not send it my way? Any thoughts on the event, Mr. T, or any of the ideas that have come out of this conversation? Post in the comments!