Earlier this week, Mr. Fenzel argued that the end of Jack Bauer and Jack Shephard, only a day apart, marked a watershed moment for our culture. He makes a clever case, but I think he’s missing something way more significant; he got the wrong pair of Jacks. Monday night marked the end of Jack Bauer and Jack McCoy, two of the most iconic fictional public servants of our lifetimes. These two Jacks couldn’t be more perfect doppelgangers if they’d been dreamed up in the same writer’s room. 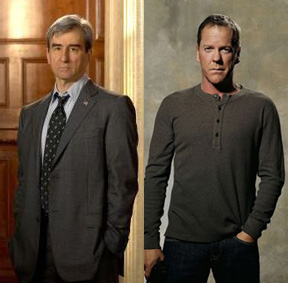 A pair of Jacks, different suits.

They’re both fanatical crusaders on behalf of the public. McCoy’s reputation for working long hours is often alluded to, and Bauer’s work habits inspired the title of his show. This dedication has turned them into outsiders. McCoy’s failed relationships are all with his subordinates. He once references being married, but we never even learn her name. He spends his few off-hours drinking alone, usually brooding over his work. Bauer’s wife was killed in the first season, and he was almost executed by his brother and father years later. Both Jacks often have to turn against their friends, and neither of them hesitate. For them, the only thing that matters is the next assignment. They sacrifice everything for the public. For us.

But the means by which they pursue justice couldn’t be more different.

Jack works in the District Attorney’s office, and the law is his weapon. In the episode Blackmail from this season, he threatens to charge a talk show host with drug dealing, for offering her date half a Vicodin to relax. McCoy does this to compel her to testify, or risk losing custody of her daughter. Keep in mind that this talk show host is supposed to be a personal friend of his. “You’re a son of a bitch,” she observes, but McCoy could care less. He just wants to win the case, and he’s going to play every legal card in the deck to do it. But he won’t break the law. He’s a junkyard dog, but also a straight arrow. 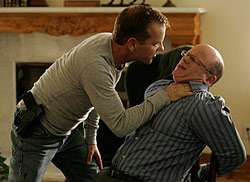 You have the right to make gurgling noises.

Bauer’s entire character is based on going outside the law. He doesn’t get a warrant before barging in. He doesn’t read anyone their rights. And notoriously, he tortures people. A lot. This all sounds bad on paper, but Bauer always faces very real ticking bomb scenarios, where the lives of thousands depend on a matter of seconds. When he tortures someone, it usually yields invaluable information, and that information usually saves lives. Bauer is a hero because he does what is necessary instead of hiding behind the law. He doesn’t have time to play by the rules, and everyone who disagrees just doesn’t get it. “The difference between success and failure is your ability to adapt to your enemy,” he explains. “The people that I deal with, they don’t care about your rules. All they care about is a result.” 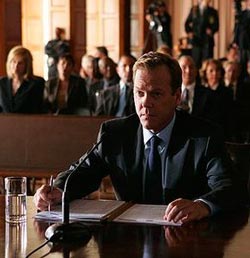 "Are you now or have you ever been a member of the Tea Party?"

That’s a quote from last season’s premiere, which had Bauer testifying before a Senate committee. A liberal Senator is up in arms about the whole torture thing. “I am more than willing to be judged by the people you claim to represent,” sneers Bauer. “I will let them decide what price I should pay. But please do not sit up there with that smug look on your face and expect me to regret the decisions I have made. Because, sir, the truth is… I don’t.” And then, right on cue, the FBI arrives with a crisis only Jack can solve, and he inevitably solves it via torture. The show won’t let you entertain the idea that the Senator might be right. The cherry on top: later that season, the smug-faced Senator is shot by the bad guys.

Bauer’s speech implies that while he has no respect for the Senate, he would welcome a trial by jury. I honestly believe the Law & Order people may have been paying attention, because about nine months later L&O began its twentieth and final season with “Memo From the Dark Side.” 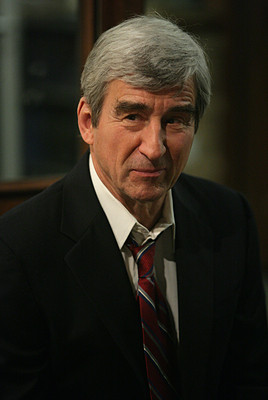 McCoy discovers that a memo authorizing the abuse of detainees was written in Manhattan–his turf. And since the memo led directly to the death of at least one prisoner, McCoy decides to charge its author with conspiracy to commit murder. His number two guy, Cutter, asks in disbelief if Jack really intends to prosecute a member of the Bush administration for assaulting suspected terrorists. “The word is ‘torturing,'” he replies, “and yes, it’s time somebody did.” As if he wasn’t already out on a limb, in the next scene McCoy also indicts the joint chiefs of staff, the secretary of defense, and Vice President Cheney.

It’s a left-wing wet dream, the same way 24 is a right-wing wet dream. Bauer basically told the Senate that New York latte-sipping pointy-headed liberals have no right to pass judgement on him. McCoy replies (to quote another liberal) yes we can. The episode is absolutely brutal on the pro-torture people. The defendant argues that enemy combatants are not entitled to any protection whatsoever. Cutter asks if they should be protected by our own sense of decency. “What is it about this country,” he asks the witness, dripping contempt, “that you don’t get?” Just like the 24 episode, Law & Order stacks the deck so you can’t sympathize with the other side even a little bit.

In Law & Order‘s (Jack McCoy’s) view, the terrorists don’t win when they blow up a building. They win when we compromise our principles. Late in the episode, an attorney for the Obama administration tries to stop the prosecution. 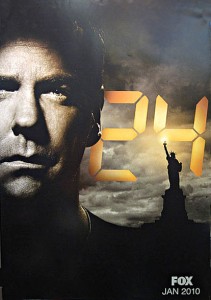 This is a great image. The Statue of Liberty is similtaneously threatened by the menacing storm clouds, and triumphantly illuminating the title of the show. Bravo.

It’s probably a coincidence (but a delightful one) that three months after “Memo From the Dark Side,” 24 began its last season… set in New York. McCoy’s backyard. And naturally, this means that Jack McCoy, Dick Wolf, and the whole Law & Order universe is saved from grisly death by Jack Bauer’s torture, which has been as over-the-top as ever. At one point Bauer disembowels a guy to get at the SIM card in his stomach.

I would pay virtually any sum to see a made-for-TV movie in which McCoy tries to prosecute Bauer for the entire 8th season of 24.

It’s a positively eerie stroke of serendipity that these shows ended their runs on the same night. And as we say goodbye to this pair of Jacks, which team are you on? Do you believe that we are a nation of laws, and nobody is above these laws, no matter how powerful, or how good the cause? Or do you believe that we live in a dangerous world, and a small group of selfless patriots must be trusted to do whatever it takes to ensure our safety? The fascinating thing is, it’s entirely possible to believe in both statements–most of us probably do to some extent. 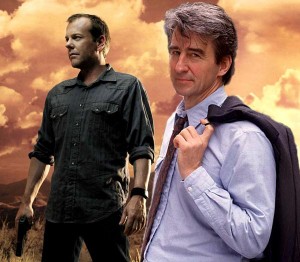 There are lots of times where we hope our public servants will uphold the letter of law, even if it’s unpopular and difficult. And there are other times where we hope our public servants won’t let the bureaucracy stop them from doing the right thing, even if it puts their career at risk. (Even the final episode of Law & Order hinged on a teacher being willing to defy her union rep and cooperate with the police.) The world needs both Jacks, and we need them going after each other, keeping each other in check.

And now we have neither.