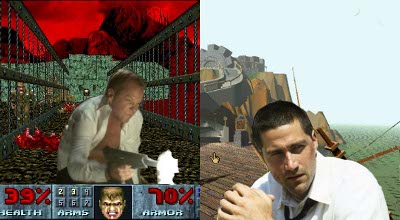 I am Jack's cultural progression.

The year is 2010, and two long-running television shows, Lost and 24, air their last episodes, one day after the other. They seem diametric opposites. Or are they?

The year is 1993, and a fantastic, two-part story has begun. A cataclysm – a rift in time and space itself, a clash of new dimensions – catapults a man from the world he once knew into not one, but two different strange and alien landscapes. To some, that man will be a nameless stranger. To others, he will be known as “Jack.”

One version of the stranger lands on a mysterious island, where time moves in unpredictable ways. Wandering a beautiful, dangerous, eternally puzzling place drenched in remembrance of things past and unknown, his journey of discovery brings him, in the end, to two long-estranged brothers playing with human beings like game pieces, vying for release from their prisons.

The other lands in a high-tech government facility, where time marches ever inexorably forward – where life is cheap, and speed matters. He is a soldier, always alone, always enraged, accomplishing one task of immense brutality and cunning only to be slammed by another and another without rest, doing the only thing he knows how to do – stopping the infiltration of his home, his unit, the very hearts and minds of his brothers of arms, by a heinous, foreign evil.

Because this story didn’t begin with the shows – it began with a cultural divide begun somewhere else – in two different visions for a new, more complicated, more observable, more technologically dense world.

In 1993, the nameless stranger’s island, which became Jack’s island, was called MYST.

And in 1993, the nameless stranger’s battle against infiltration wasn’t against terrorists, it was against monsters in a computer game called DOOM. 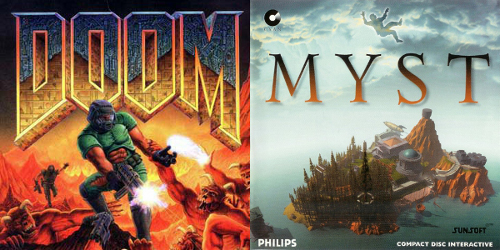 It's like a McDLT - hot on one side, cool on the other.

It Was a Very Good Year

Jack’s fantastic 17-year voyage came to a close this week, as the television juggernauts Lost and 24 aired their series finales on back-to-back nights. On Sunday, we left the island forever. On Monday, the waves upon waves of demons/terrorists/friends-turned-bad finally relented.

But it all began with a sea-changing moment – the expansion of computer gaming into the third dimension. The proliferation of the CD-ROM and the surging popularity of first-person gaming in immersive worlds with movement along three axes – three years before Super Mario 64 – reinvented in a fundamental way the frame of reference human beings have for the complexity of their lives, introducing new anxieties and new ways of thinking about time and space.

Well, to an extent, it reinvented them – and to an extent it was a signpost of a larger trend that informed the change – a trend of emerging access to more immersive and more sophisticated simulations of reality, available cheaply and widely, that brought the question of how we choose to bridge the gap between what we are capable of seeing and our minds can internalize and live with constructively.

The narrative parallels are fascinating. The way these stories flow from franchise to franchise – essential stories of our time, where the names and faces of the heroes often change, and often remain ambiguous.

It began the original “this island makes no goddamned sense, why is there this odd machinery here and these numbers, this is really frustrating, but if I allow myself to get into it I am sucked in forever,” a little game called MYST, – and the original “THERE’S NO TIME FOR THIS RIGHT NOW! I HAVE THE WEAPON! TAKE THE SHOT! DAMMIT!” — well, that’s DOOM.