Do you agree, John Locke? 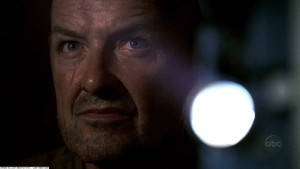 So.  This week’s episode started with the births of Jacob and his twin brother What’s-His-Name.

Question 1 (a silly question): Was I the only one screaming “Tell us his name, you bastards!” at the TV last night?  Gah.  And if the Man in Black really doesn’t have a name, how did he introduce himself to the shipwrecked fellas?  He must have at least had a nickname, no?

Question 2 (a serious, overthinky question): What are we to make of Darlton’s retelling of the Jacob-Esau myth?  Clearly they were riffing on the same themes as the original Bible story, so… why?  And why did they change up the story in so many different ways?

Speaking of Jacob and the Man in Black, we got some interesting characterization of those two this week.  This episode really hit hard on the science vs. faith themes, even though (for once!) those words weren’t actually spoken aloud.  The Man in Black is shown to be the scientific one: he doesn’t have blind faith in his mother; he bases his points of view re: humanity on empirical evidence and study; he and his ancient Roman buddies go out of their way to explore the Island’s weird electromagnetic phenomena (and, if I’m reading this right, even built the frozen donkey wheel); and he wants to explore “across the sea” just because it’s there.  Meanwhile, Jacob blindly accepts everything his mother says, except, of course, that humanity is evil.  That’s apparently because Jacob’s blind faith in his mother can only be topped by his blind faith in human society, which is interesting seeing as Jacob has never lived in human society.

Question 3 (serious, overthinky): Is there any chance in hell that science, curiosity, and a belief in empirical study will win the day over faith?  I know that science and skepticism and so on are now associated with Smokey, and Smokey Is Bad, but…

I mean, think about that scene with the frozen donkey wheel.  The Man in Black is trying to open a portal that will take him off the Island.  Mommy Dearest says, in so many words, “No, Man in Black, don’t do science!  Your curiosity will be the death of us all!”  (This seems to be the theme Lost has been pushing over the past few weeks through the character of Jack.)  And what does the Man in Black say?  He says the thing that totally won me back over to his side.  In so many words, he says to his mother (and to Jacob, and to God, and to Lost’s writers, too), “I’m only doing this because you never told me anything!”    If that’s not a cry that we Lost fans can rally behind, I don’t know what is.  Answers!  Answers!  We want answers!  And it’s science and reason, not faith, that’s going to get us those answers!  You go, Man in Black!  I’ll be right here on the other side of the TV set, cheering you on. 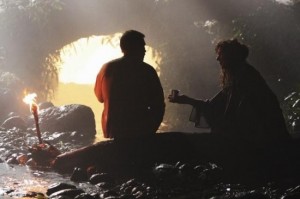 Question 4: Who’s Mommy Dearest?  Just another victim of a shipwreck who got roped into being the Island’s Jacob by the Island’s previous protector?  Or something more mythological?  (Also: Allison Janney!  With her, Katey Sagal, and Kim Dickens, Lost has finally hit the awesome-red-headed-character-actress trifecta!  Sweet!)

Question 5: Why did Mommy Dearest think the Man in Black was so special?  The moment she saw him as an infant she clearly thought there was something about him.  What could it be?  And would things have been better or worse if he had been her replacement instead of Jacob?

20 Comments on “The Overthinking Lost Open Thread: “Across the Sea””