Ah, that’s more like it!  This episode made my day–and I’ll explain more about why on Monday.  For now, let’s mull over these questions, shall we?

Let’s call this season “Greatest Hits.”  So far, we’ve been to the hatch (although it was a little, erm, exploded), the Barracks, the caves, and, this episode, the beach camp, the Dharma sub, and the Black Rock.  Plus, Smokey went and told us that we’d be hanging out with him and his buddies at the Hydra Station soon.

Question 1: What classic Lost location would you like to return to before the season is out?  I’m quite positive we’ll be seeing the frozen donkey wheel again, but the place I’d really love to see, if only for a second, is the “pile of notebook-filled canisters where the pneumatic tubes end.”

Question 2: So, whose lips wobbled when Ben said, “Because he’s the only one who will have me”?  Come on.  Raise your hands.  Don’t be ashamed.  (For the record, my notes read: “Ben!  WAAAHH!”  Not that I could see what I was writing.  I had, um, something…sniff…in my eye.)  And for those of you who aren’t buying Linus’s transformation into epic woobie, why aren’t you buying it? 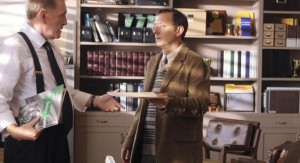 Question 3: So Miles FINALLY got something meaningful to do in this episode.  Welp, I guess he’s a goner now.  So, is Miles going to receive a karmic death for stealing Nikki and Paulo’s diamonds or what?

Question 4: Widmore!  Okay, that’s not really a question, but… Widmore!  He’s here!  He’s made his way to the Island!  What do you think’s going to happen?  Will he join up with Crazy Jack and His Island Boppers?  Why did Jacob want him to come to the Island, anyway?  And where are Penny and Desmond?!  For GOD’S SAKE — WHERE ARE PENNY AND DESMOND?!

Question 5: I can’t come up with a good question about Richard. Can YOU?

See you on Monday.