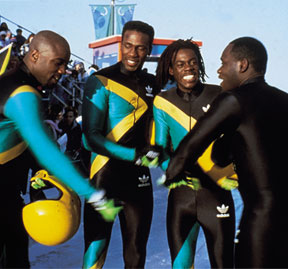 Every Winter Olympics, I do two things:

The movie stars John Candy, testing our suspension of disbelief as a former Olympic athlete. He has a theory that world-class sprinters are really just underdressed world-class bobsledders. And when three of Jamaica’s fastest are tripped up trying to qualify for the Summer games, Candy gets to put his theory to the test. As he explains to one of his old teammates:

Listen, three of these guys can run the hundred in under ten-flat. I don’t care who you are, that’s lightning!

But what Irv fails to mention is that the fourth team member, Sanka Coffie, runs the hundred in about fifteen.

Sanka (played by Doug E. Doug) is not a sprinter. He is not an athlete. In fact, it’s implied that he’s kind of a wimp. (In a training montage, he can’t even do a single pullup.) But Sanka is Jamaica’s greatest pushcart driver. The pushcart is basically a soapbox derby racer, which is what children in the United States used to do for fun before the invention of Call of Duty. Apparently in Jamaica, pushcarts are driven by grown men, while children sit in front doing absolutely nothing.

When Sanka’s friend Derice (played by Leon, just one name, like Madonna) gets the idea of starting a bobsled team, Sanka is the first guy he recruits. In Derice’s mind, a bobsled is just a pushcart on ice. And despite the fact that Sanka crashes in the one race we see, Derice apparently feels that his driving skills make him indespensible.

John Candy has other ideas. One of the first things he does is forbid Sanka from driving.

You see, Sanka, the driver has to work harder than anyone. He’s the first to show up and the last to leave. When his teammates are all out drinkin’ beer, he’s up in his room studying pictures of turns. You see, a driver must remain focused 100% at all times. Not only is he responsible for knowing every inch of every course he races, he’s also responsible for the lives of the other three people in his sled.

In other words, whatever skill Sanka has as a driver is more than offset by his laziness and ineptitude. It’s a Catch-22: any grown man who prides himself on being the greatest pushcart driver in Jamaica is automatically too immature to drive a bobsled. 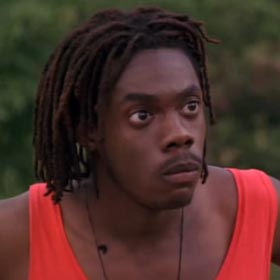 The only possible reason for putting Sanka on the team, his pushcart driving ability, is rendered irrelevant when Coach Candy sticks him in the back of the sled. In every respect, he seems like a liability. He is in terrible physical shape. He’s immature and egotistical. He is a terrible fundraiser (total collected: $1.16). It seems like the Jamaicans would have been better recruiting a fourth teammate at the Calgary Airport.

Miracle, another Winter Olympics movie, makes it brutally clear how hard these men worked for their shot at gold. “I can’t promise you we’ll be the best team at Lake Placid next February,” says Kurt Russell. “But we will be the best conditioned. That I can promise you.” They practice until they collapse, and then they get up and practice some more.

Sanka’s training, on the other hand, consists of sitting inside an ice cream truck. 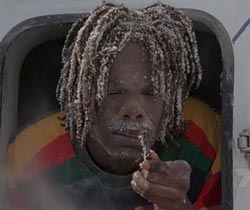 He doesn’t get Olympic glory because he worked hard for it. He gets it because his friends need some ballast. That’s a dream I can get behind.

Sanka even gets to earn his keep by insisting they show some Jamaican pride, starting their runs with those immortal words, “Feel the rhythm, feel the rhyme, get on up, it’s bobsled time!” It’s this change that causes the team to gel, jumping from last place to within striking distance of gold in a single perfect run. Think about that: it’s not the thousands of hours of physical training that turns the Jamaicans into champions. It’s the lazy slob, who gets everyone to lighten up and have some fun. It’s Sanka Coffie, a hero to every couch potato who is secretly ashamed that each and every ice dancer is in better shape than he will ever be.

7 Comments on “Overthinking Cool Runnings: How I Learned to Stop Worrying and Love Sanka Coffie”