[By popular demand, we’re bringing you a Lost-oriented Open Thread this week.  And if it goes well, we’ll bring you another one next Wednesday, too!  But don’t worry—this isn’t this week’s only Lost post.  I’ll still be subjecting “Lighthouse” to a level of scrutiny it probably doesn’t deserve.  Come back Monday to see the full piece!]

So, here we are, four (or five, depending on who’s counting) episodes into Lost’s sixth season, and I’ve gotta tell you, I am loving it.  Although I disliked the flash sideways-es at the beginning, I think that had less to do with the narrative structure and more to do with the fact that Kate is just an uninteresting character. The events that occurred on the Island and in the flash Universe worked together to remind me of why I was so interested in the character of Jack back in seasons 1 and 2, before he started pining too much after Kate, before he got a tattoo in Thailand, before he stopped asking the important questions.  I’ll talk more about his flashsideways in my full post on Monday, but I was glad to see him get a full episode of character development before the season was up.

Question 1: The flash sideways-es: Awesome, or a waste of time?  Would you prefer a faster, more epic pace, or are you as cool as I am with these super-slow-burning character episodes? 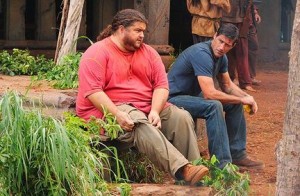 "So, you and me are just gonna talk this whole episode? Uh, that's cool. I guess."

Speaking of Jack, it seems the the Daddy issues we thought the show forgot about are back and raring to go.

Question 2: Does this mean that Sayid, the only main living character who doesn’t have Daddy issues of his own, is doomed to die before the show’s climax?

And, speaking of Daddy issues, the unseen Christian Shephard haunted this episode.  (My bet is that we’re not going to see him again until the climax of the show — maybe the third-t0-last episode.)

Question 3: Takin’ all bets!  Christian Shephard: good or evil?  On the good side: Jack reminded us this week that he helped the Lostie’s out in the first season by leading them to the caves!  (Also his name is “Christian Shephard.”)  On the evil side: Back in the day, we saw him hanging out in the creepy cabin (which was probably being used by evil Smokey) with Infected/Evil Claire. 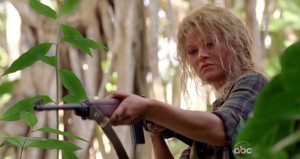 And, finally, the big question:

Question 5: Now that the answers of Lost are coming out all fast and furious, do you WANT all the questions to be answered?  While I certainly want the big questions answered, I don’t want the show to lose its sense of mystery, either.  It’s like, if I were in a room with a poet, would I have him or her gloss every single word?  Then the poem would lose its spark.  Of course, I can easily understand the other point of view: “I invested so many hours in this thing.  I need to know that it all makes sense, that it holds together!”  (Also: is this debate just a meta-level recapitulation of the old “faith vs. science” debate we keep seeing in the show?  Am I like poor, deluded Locke, saying, “I looked into the eye of this network television series, and what I saw was beautiful”?  And if you, the rationalist answer-lovers, don’t get the answers you desire, will you take a telescope, Jack-style, and start smashing all the mirrors in Darlton’s houses?)

See you on Monday.