You’ve probably heard the news by now that hedge fund Pacificor, LLC has purchased the rights to the Terminator franchise from Halcyon’s bankruptcy auction. This transaction has sparked massive speculation on the franchise’s future. Will McG make more sequels? Will T1 and T2 screenwriter Will Wisher’s treatments turn into the next two sequels? Will Pacificor go for a total reboot?

The future not set: there is no fate but what this shady hedge fund makes, right? Well, I wasn’t content with that. As a rabid Terminator fanboy, I needed to know how this turns out, so I took the liberty of using the Overthinking It Time Displacement Field (OTITDF) to travel ten years into the future to see what will become of our beloved franchise.

My report is as follows. Be warned; it ain’t pretty.

Pacificor’s first move was to get a sequel to Terminator: Salvation out the door as quickly as possible. McG, not having anything else better to do, agreed to helm the sequel. Christian Bale, upon hearing that McG had brought on the same Director of Photography from the last movie, refused to participate.

McG, in a bind, recalled Freddie Prinze, Jr’s fine work in Wing Commander and tapped him for the role of John Connor. Nicolas Cage just showed up on set, and nobody had the heart to tell him he wasn’t actually in the movie.

Pacificor, for its part, contributed the title: 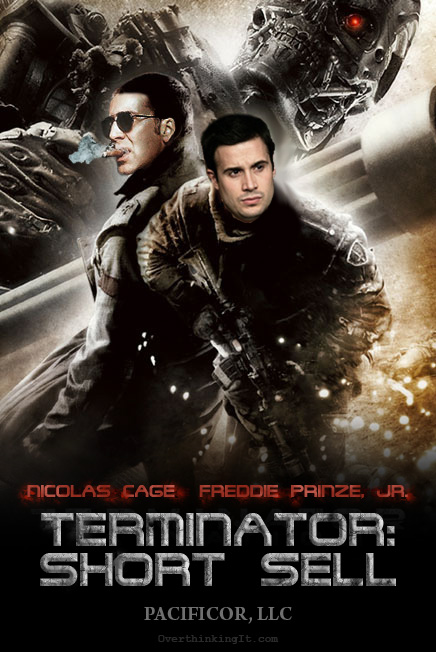 To no one’s surprise (well, this guy was surprised), Terminator: Short Sell tanked at the box office. Pacificor demanded a new direction for the franchise, one that would appeal beyond the hard-core fanboy demographic. Pacificor fired McG, but retained Freddie Prinze, Jr., whose nuanced performance in Terminator: Short Sell was one of the few parts of the movie that gained critical praise. Pacificor then did what it should have done in the first place: exploit Freddie’s comparative advantage in romantic comedies: 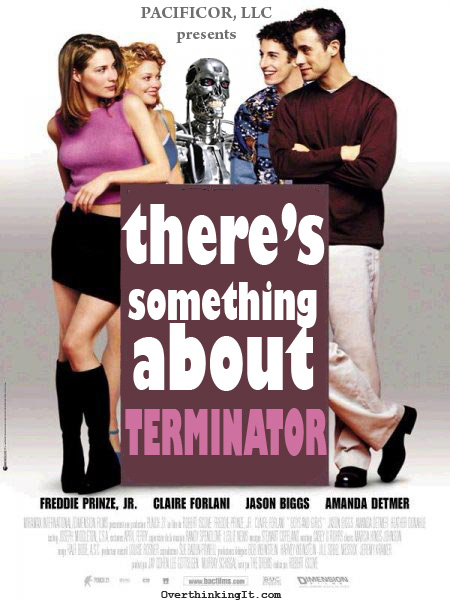 There’s Something About Terminator, with a much smaller budget than any of the previous films in the franchise, produced a high Return On Investment (ROI), but by this point, Pacificor’s management had grown tired of the feature film business and sought new ways to leverage its Terminator asset.

10 Comments on “EXCLUSIVE: The Future of the Terminator Franchise”