A couple weeks ago, I discussed the twisted subtext of Cartoon Network’s Clone Wars. But there’s another, even darker aspect of the series: the way George Lucas is pushing it at the expense of the original Star Wars movies. Like all Sith plots, this one is hard to see, even as it unfolds in plain sight.

Last summer, my son informed me that he wanted to have a Star Wars: A New Hope party for his fourth birthday. This was among the proudest moments of my life. Definitely prouder than the day he was born. (Think about it: everyone gets born. Not everyone appreciates Star Wars before he turns four.) 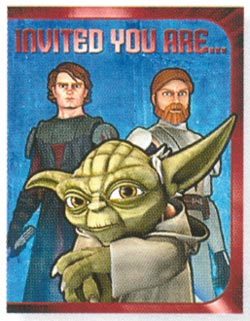 So it was with great relish that I went online to buy a full spectrum of party stuff from a galaxy far, far away. I wanted plates that looked like Death Stars, cups that each showed a different member of Red Squardron (I was gonna keep Wedge for myself), and a tablecloth that reproduced that original poster where Luke’s shirt is open.

What I found was page after page of Clone Wars stuff. Nothing that showed Luke, Han, or Leia. There was a lot of Vader, but I’m sure it was because he was in Episode III. Yoda was only depicted holding a lightsaber—his Clone Wars incarnation. There are 42 items listed in EZ Party Zone’s Clone Wars category. In the “Star Wars” category, there are only four items, all of which are Vader-related. I scoured the internet, and I couldn’t find a single kids’ birthday party item that was definitively original trilogy. This was a problem for me, because I am carefully shielding my child from all knowledge of the prequel trilogy for as long as I can. If he finds out Santa isn’t real, that’s alright. The day he hears about Jar-Jar, I’m going to cry.

Now, it’s totally possible that there’s nothing sinister at work here. After all, Clone Wars is one of the most popular shows for little boys right now, whereas the original trilogy is over 25 years old. I was probably naive in thinking that they’d still be making Millenium Falcon napkins.

But I can tell you, as someone deep in the parenting trenches, that A New Hope is still a sacred text among the juice box set. Last year, Slate‘s Emily Bazelon wrote about the incredible hold the movies had on her young sons: “With their friends, they dissected the business of Jabba the Hutt and the furriness of Ewoks, never mind that they appear in later movies that my kids have never seen.” Over at Wired, Daniel Donahoo tells a similar story about how his kids love to draw Vader and R2, even though they’ve never seen any of the movies. 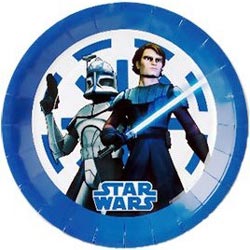 In fact, Howard Roffman, the President of Lucas Licensing, once said that a chief reason for the brand’s continuing popularity was that “so many parents who were influenced by Star Wars when they were children or teenagers are now introducing their own children to the Saga. You couldn’t ask for a stronger brand endorsement.” Lucasfilm damn well knows that today’s kids are loving A New Hope, right along with their parents (who are actually responsible for buying birthday party favors).

(Weird unrelated fact: Howard Roffman, in addition to controlling all the Star Wars merchandise, is also a fairly famous photographer of gay male erotica. I am totally serious.) 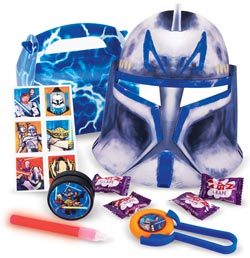 There is so much Star Wars merchandise out there that it’s easy to believe Lucasfilm pretty much rubber stamps any proposal that’s not written on a cocktail napkin. But I don’t think you gross over a billion dollars a year by letting just anyone slap your logo on their cheap plastic. Roffman and his gang are very picky about what Star Wars products are out there–if you don’t believe me, read this account of one toy designer’s many brilliant but rejected proposals.

“We take our role as shepherds of the brand very seriously,” said Roffman in that 2002 interview, “particularly because it is a long-term prospect and needs to be managed accordingly.” He also said: “I can’t think of a time when Star Wars merchandise didn’t have to compete for shelf space! It’s a competitive world out there and everything has to hold its own. Star Wars earns the shelf space it gets.”

Here’s what I think is going on. Lucasfilm feels that if it produces too much Star Wars stuff, it’s just going to be competing with itself. It also wants to emphasize products that build the brand for the future. I can’t prove this, but I’m pretty sure they have an official policy of NOT marketing original trilogy stuff to children (or at least significantly downplaying it). 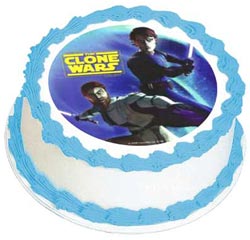 Check out this Fox Business interview with Roffman, from only two months ago. The interviewer introduces him as the man in charge of Star Wars licensing, and gushes, “I’ve got three boys, eight, six, and three, seen it a thousand times!” Presumably, she’s talking about Star Wars, the original movie. And the very first thing Roffman says to her is, “I hope that your boys are watching The Clone Wars on TV.” This guy wants kids watching the Cartoon Network. And why not? You only purchase DVDs of the original trilogy once. But you watch Clone Wars every week, boosting the show’s ratings, and the company’s profits.

Lucasfilm is aggressively marketing the original trilogy… but only to adults who don’t care about The Clone Wars. Hasbro still makes a Millennium Falcon toy, but it’s $159.99. Adidas is releasing some gorgeous Skywalker hi-tops, but I’ll bet you they’re not available in kids’ sizes.

Obviously, Lucasfilm has a right to market Clone Wars as hard as it wants. What offends me is the idea of not giving consumers a choice. You want a Star Wars birthday party? It’s going to be a Clone Wars party, period. And if you’re still not convinced that’s what’s going on, I invite you to try and purchase a copy of the original films, the way they were released in theaters. You can’t. You have to watch Harrison Ford meet computer-generated Jabba at Mos Eisley.

But if you want something approaching a happy ending, here it is: I made some goodie bags with Lego storm troopers and inflatable lightsabers, and Casey made a glorious paper-mâché Death Star piñata. In the end, the younglings had their old school party.

But I still want my Wedge cup.

9 Comments on “George Lucas’ Secret Plan to Corrupt Your Children”