Look out behind you!

Disaster movies, like Roland Emmerich’s 2012 (debuting this week), always feature our protagonists speeding away from some onrushing threat. Whether a giant monster, a geological phenomenon, a torrent of lasers, or a terrifying combination of the above, the margin between life and death is measured in miles per hour.

The chase says so much about the genre and humanity’s relation to it. It’s man vs. nature writ large. Nature goes from indifferent to cruel, targeting our heroes with falling debris, obscuring smoke and other unfortunate people who just weren’t fast enough.

It’s gaining on us! Step on it!

The panel of Overthinkers sprinted to safety this week and, while catching their breath and staring at the wreckage of a major American metropolis, debated on what was the Greatest Escape in a Disaster Movie. Read our verdicts and weigh in by voting in our poll.

And make sure you read all the way to the end for our Mystery Guest Judge!

http://www.youtube.com/watch?v=ERmcJQnvEmM
(All of it is good, but the climax begins about 8 minutes in)

The 1996 disaster movie Twister is a populist fable about an estranged couple, alienated from each other by the pressures of modern scientific life, finding reasons to stay married and setting up a legacy in the American heartland. It is also, somewhat peripherally, about tornadoes.

Okay, fine, it’s 60% about tornadoes and 40% about relationships – maybe 75/25 (maybe 90/10). But it’s loaded with symbolism, and its final escape scene is a poetic, if unfashionably heteronormative, take on man, woman, and nature.

See, the tornado is the ultimate symbol of perverted and dysfunctional libido. It is a literally twisted combination of male and female sexuality – a maw of insatiable hunger bound up in a rampant shaft carving a path of indiscriminate destruction. When male and female sexuality fail to work together harmoniously, it literally tears houses apart (note the shattered picket fence in the video). And when it comes upon the unsuspecting and placid midwestern farmsteads, you’d better hide in the storm cellar, or this homewrecker will fling you from the earth to your death. 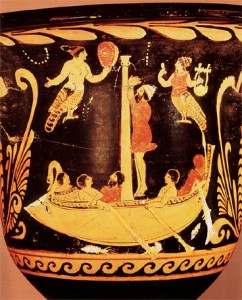 The Twister prequel was much lower-budget.

Odysseus faced a similar irresistible force once – though in a more singular battle of masculine continence versus feminine allure. When sailing past the deadly sirens, he ordered his crewmen to bind him to the mast, and not to release him no matter how much he pleaded. Thus, he survived their song.

In Twister, a very similar scene plays out, except it is the positive, nurturing, supporting, grounded combination of male and female that triumphs over its torrid, destructive, voracious pursuer. Chased by the Finger of God itself (the dreaded F5 tornado!), Bill Paxton and Helen Hunt flee the unhelpful assistance of their motor vehicle for the symbolic refuge of a nearby farm, where they find the ultimate symbol of the proper communion of male and female – a sturdy pipe, flowing with water, buried “at least 30 feet” into the rich, deep, fertile Kansas earth.

The earth grounds and anchors the pipe, and the pipe nourishes the field. Without the earth, the pipe would not be strong enough, and without the pipe, the earth would not be strong enough. Together, they produce growth, and they do so in quiet, homebound contentment. Like Odysseus and his crewmen, Bill Paxton takes leather straps and binds the couple to the pipe – first his wife, then himself – in a symbol of the bonds of faith he still has in his own marriage and their connection with one another.

In a scene that is oddly suggestive of an expressonistic sexual ballet, Bill and Helen (Jo in the movie) are surrounded and assaulted by the full force of the tornado, seeing at once its central shaft and thunderous climax and the revelation of the blue sky to be found at its conclusion. They become weightless, they are lifted from their feet, but the pipe holds them, their hands hold them, and the sturdy earth of Kansas holds them, saving their lives and completing their escape from the clutches of the F5. After an orgasmic swell of music, the tornado dissipates.

Bill and Helen/Jo have found each other, found their place in nature, and successfully outlasted, what $70 million-$80 million or so in CGI special effects. Truly the lesson is that sometimes, to escape, you have to go back home.

Also, in Kansas, they should apparently make the whole barn out of leather straps.

Or read more from… Featured, Movies, 2012, disaster movies, end of the world, I am legend, roland emmerich, The Bible, the day after tomorrow, think tank, twister

19 Comments on “[Think Tank] Greatest Escape in a Disaster Movie”