One of the key services that we at Overthinking It provide our loyal readers – for absolutely FREE! – is inventing words for concepts you didn’t know needed words. Like the Ghost Ship Moment, for instance. A $19.99 value, yours free just for subscribing.

Today, we let you in on another explosive concept that will unlock your minds to new levels of movie criticism: the benchmark movie.

A benchmark movie is inherently personal, however. Everyone has different tastes. So the Overthinkers will each contribute some benchmarks of their own. Once you’ve read through ours, post your own in the comments!

There are two ways to go here.  Either you choose a movie that’s pretty good all around or you choose a movie that has a perfect balance of good and bad.   The former might be perfectly middling, but the latter’s the one you’re going to remember.   To me, there’s one movie that is perfectly worthy of both our love and our hate, our respect and our disdain: Robin Hood: Prince of Thieves, which owns a middling 58% score on Rotten Tomatoes.

Writing:  The film falls into a lot of traps.   Writers Pen Desham and John Watson take the classic Robin Hood story, then toss in an unnecessary devil worship subplot that features a lot of egg cracking and cackling that doesn’t do much for the plot, the other characters, or the movie as a whole.  The writers save themselves by a really interesting bit of character development.  The “spoiled rich boy tempered in the crucible of war” theme gives the whole movie a weight that the classic tale lacks (and which Ebert hated) undercuts the usual inevitability in the relationship between Robin and Marian.

Acting:  Costner’s accent is notoriously bad, distracting even from a few moments of solid emotional development and ass-kicking.  Slater as the petulant brother is actually worse, but he’s on screen far less often.   Most of the other characters are solid, but the whole thing is saved by one of the great performances of all time, Alan Rickman as the Sheriff of Nottingham.  So very, very good. 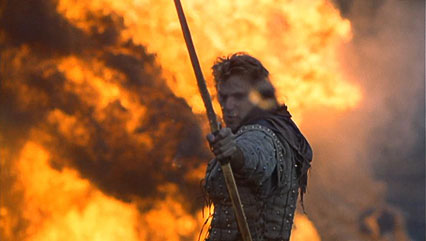 Action:  Some solid ambushes and an object lesson in the strategic weaknesses of treehouses make for some of exciting stuff, but the final swordfight is sort of routine.

Music:  Score by Michael Kamen, soaring and exciting in a 1991 sort-of-way that’s been stuck in my head for 18 years.   On the other hand, Academy Award nominated original song by Bryan Adams.   (This predates YouTube by more than a decade, why is it still the first suggestion in the search bar when you type “everything”?)

Half awesome, half awful: the perfect rubric.

PS. Apparently, this 1991 movie about medieval England was able to predict the outcome of the  1992 general election: “The popularity of over-scored, “let’s hug” bullshit like Robin Hood predicts the certainty of a one-term George H.W. presidency better than any number of Gallup polls,” says Walter Chaw of Film Freak Central.”