Considering the music of Bon Jovi’s Livin’ on a Prayer (we already considered the lyrics last week), two issues emerge. First: What’s up with that awesome key change near the end? And second: What the hell key is the song in, anyway? Step into the Think Tank to find out. 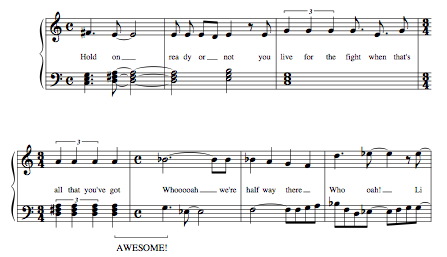 This is the passage we're talking about, FYI.

Lee: I read that epic key change as a change from Em to Gm. Is there a harmonic relationship between the two? Most certainly. The relative major scale of Em is  G major, and the parallel minor scale to G major is G minor.

So in other words, Gm is the parallel minor of the relative major of Em.

Also, the chord progression of the key change itself goes from D major (“…all that you got!”) to G minor (“Whoaaaaa…”). Clever in that D major is both the VII chord of the original key of Em and the V chord in the new key of Gm.

Wrather: Mark, doesn’t that depend on whether you hear that last chorus as being in G minor or in B-flat major? That is to say, in “Livin’ on a Prayer,” I hear a strong arrival at the tonic on the second line of the chorus (“Woah…”) which is underscored by the suspended figure in the melody line over a dominant harmony (“…halfway there”).

We're not having a poll this week, but let us know in the comments which of these you prefer.

I think you could argue that there are 3 or 4 key changes in that song—or at least changes of mode—since the verse is in minor and the chorus (as it sounds to me, anyway) is in the relative major.

Stokes: Living on a Prayer is actually a very cool song, harmonically.  Here’s how I hear it:  The progression for the verse is C major -> D major -> E minor, which seems at first like VI-VII-i in E minor.  Music theorists reading this:  it’s important to remember that in pop music, VI-VII-i and its major-mode equivalent bVI-bVII-I are *totally* kosher.  Not quite as common as I-IV-V-I, but common enough that you have no reason, on first hearing the song, to hear the verse any other way. But when the chorus rolls around, you get C major -> Dmajor -> G major, or IV-V-I in G major.  You can think of that as a key change, but I find it much more interesting to think of the song as having been in G major all along… you just have to retroactively hear the opening loop as a IV-V-vi deceptive cadence.

If you buy this analysis, it would mean that the verse lyrics (which are all about Tommy and Gina’s real-life hardships) are part of a deceptive shadow world, while the chorus – the sum of their dreams and prayers – takes place in the “real” key… and that’s what the song’s all about, isn’t it?  The idea that prayers are real enough to live on?  (This kind of heavyhanded one-to-one symbolism is maybe a little juvenile, but it seems to work so well here! And if I’m not allowed to hear a Bon Jovi song as heavy handed and juvenile, then I think the terrorists have already won.)

The key change becomes even more interesting.  D major -> G major has been the song’s main cadence so far, and it’s the tool that they’ve used to move from the minor verse to the major chorus.  Going from D major to G minor now would seem to undermine everything that’s come before… but Bon Jovi just takes the opportunity to make more lemonade.  The opening progression arrived at an E minor chord, but we recontextualized that as vi of G major, right?  And we’ve landed on a G minor chord this time? Fine, THAT can just be vi of the NEW key (Bb major).

Note that if you keep hearing it in G major, the move to a minor one chord is, like, the most depressing thing ever. Good thing that's not how we hear it, right?

And if you want to interpret this as a sign that Tommy and Gina will keep on fighting, no matter what challenges life throws at them… well, I certainly can’t stop you.

Wrather: Right, exactly—I was using the evidence in a similar way as Jordan. My interpretation is like the inverse of his: The song is in minor (almost) all the way through, reflecting the hardships of the life Johnny and Tina live, with a phrase or two in major when it represents their hopes.

But Stokes’ argument that the first progression (after the bass intro) is a deceptive cadence is convincing to me. It’s almost as if the song is going: “Almost…. ALMOST… nope.” with those three chords.

Shechner: Hey—isn’t the modulation just up by a minor third?  Not taking Stokes’ retro-active rephrasing of the verses as continual deceptive cadences in G, of course…

Stokes: If you bear the song as in minor throughout, it modulates E minor -> G minor, up a minor third.  If you hear it as major, it goes G major -> Bb major, again up a minor third.  If I understand Wrather right, he hears it as in minor before the modulation, and major afterwards, which would mean E minor -> Bb major, up a tritone (rad as hell!).  And I suppose you could hear it as major before the modulation and minor after (G major -> G minor), but I find that reading a little perverse.

Wrather: Sorry, I was unclear. I think the verse is in minor and the chorus is in the relative major, both before and after the modulation. Though in the chorus the arrival at the tonic (“Woah—livin’ on a prayer”) doesn’t really have strong rhythmic emphasis (it’s in the middle of a four-bar phrase, not at the beginning or end, and it only sits there for a beat and a half.)

Lee: Upon further reflection, we’re all wrong. Bon Jovi invented two new keys for this song: before the modulation, it’s in the key of New Jersey. Allow me to notate:

And after the modulation, well, I don’t know what to call that key, but I know it looks like this:

[If you find this sort of ridiculous music theory analysis amusing, be sure to check out our “4 Greatest Key Changes in Pop Music” (aside from this one, of course).]

6 Comments on “Perspectives on “Livin’ on a Prayer,” Music Theory Edition [Think Tank]”