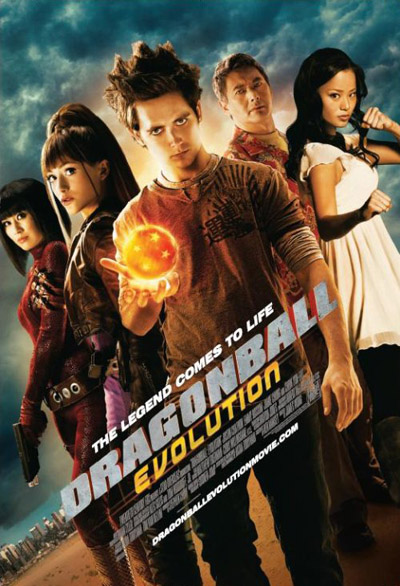 My status on Facebook right after I saw this was something like "Somebody should have put this movie down. They don't let horses run with three broken legs."

Which doesn’t really bring me back to Dragonball: Abomination, but it does mean I got in some quality overthinking.

What is wrong with the movie? A LOT. I’ll close by going over a quick list.

A lot of the characters are conflated, so that they take details from one character and port them over to another character. This is kind of an awful technique, but it’s useful in managing to recreate memorable franchise scenes without adding exposition, and, used properly, it can help streamline a franchise film’s running time considerably.

This movie has a lot of conflations. Enough that the “necessary evil” rises to the level of “failure in execution.” Almost none of the characters resemble their depictions in the comics or the TV show in meaningful ways. It’s really like they stole the costumes and made a random movie.

It’s an I, Robot level of fidelity to its source material with, inexplicably, far fewer martial arts fights.

Piccolo is conflated with Vegeta and The Emperor Pilaf.

Goku is conflated with Gohan at the beginning of the whole Great Saiyaman nonsense, except without the liberating nonsense.

Grandpa Gohan is conflated with Krillin (the fact that he’s alive at the beginning of the movie should be hint enough as to what’s going to happen) and with Mr. Popo (he even preserves Mr. Popo’s over-the-top racism by having a watermelon patch)

Master Roshi is conflated with Jiraiya from Naruto (they port in training scenes from Naruto and make the kamehameha into a rasengan — a two-directional rotating wind technique. No joke. It’s a really weird choice, but Jiraiya is based on Roshi anyway, so I guess the comparison begs to be made, and I might just be seeing shadows)

Mai, who isn’t a character of even minor note in the original material, is given a much bigger role and conflated with Oolong the shapeshifter during his terrorizing phase, and also with Piccolo’s henchman Tambourine, and also with random generic sci-fi lady in a boob suit, a la Mystique, half the cast of Farscape or Cleopatra 2525 (which might have the highest ratio of theme song quality to actual show quality in television history).

Yamcha, well, he doesn’t do a damned thing. He isn’t even Yamcha.

Chi-Chi is given a much bigger role that is completely different from her original role. I suppose if Goku is Gohan, then Chi-Chi is like Videl, except she doesn’t really do anything Videl does.

The whole love plot in this movie really really sucks, and goes a long way toward ruining it. But doing it in the first place is probably forgiveable. It is Hollywood — they lose their lunch or something if people have some sort of motivations in their lives other than love, determinism, self-sacrifice, mind control, or somebody else yelling at them about the aforementioned things. Hasn’ t a Hollywood writer ever met anyone with a hobby? People do all sorts of things for all sorts of reasons. But I guess it’s too much to expect the Dragon Ball movie to be the one that breaks the mold.

Goku is white. This was the first sign that something was terribly wrong with this movie, but I don’t really mind it, because Goku is an alien and half-monkey, so his race shouldn’t be that important. Besides, to a lot of white people, Goku looks white. But no, it’s pretty clear Goku is supposed to look Chinese, and it would have been nice if they’d cast him as a Chinese guy. On the bright side, it makes it pretty clear that he’s adopted.

The whole thing takes place in a modern-day world with only minor variations from the present. Like, there’s some vague advanced technology, like the Capsules, and the various kung fu fighters, but the world is really mundane and lacks any sense of adventure or whimsy. Plus, a lot of locations that are fairly fantastical are made really boring. The castle of the ox king becomes a McMansion in Beverly Hills or something. Master Roshi’s hut, instead of a tiny island lost in the ocean, is a small apartment in a city.

But again, these are not what ruin the movie.

The sense of whimsy is almost entirely absent, and the soundtrack is punishingly wrong. Dragon Ball is funny. It’s silly. It’s absurd. This movie is never going to have credibility. So, why is so much time and energy put into somber, reflective scenes, characters moping around, and this constantly dissonant, grinding, driving score that is really unpleasant to listen to? It’s hard to say this about a movie that makes no goddamned sense, but the whole thing is way  too serious in all the wrong ways.

It isn’t funny. Well, Chow Yun Fat is really funny when he first shows up, but they kill that quickly. Dragon Ball needs jokes to cut the tension. Jokes and overblown reaction shots. And it doesn’t have them.

Where are the fights? Oh, there are action sequences, but the fights you hoped and dreamed to see in the big Dragon Ball Hollywood movie never happen. There are chase scenes, there are scrambles, there are skirmishes, there are training scenes, but there is never a point in the movie where two characters square off, stare each other down, talk trash for a bit, then have a multi-stage kung fu fight. That is the bread and butter of the franchise. Dragon Ball without the fights is like Transformers without the robots. Like, they just stay cars the entire movie (so that would basically be Herbie the Love Bug, the latest reboot of which had Lindsay Lohan in it, and Megan Fox’s career suddenly makes sense).

There is one scene (ONE!) that lasts about thirty seconds near the end of the movie that looks vaguely like a fight from Dragonball Z. Vaguely. For less than a minute. If that sort of fight had been 80% of the movie and the story totally blew, a lot more people would have watched this movie and bought the DVD (instead of, apparently, just me. You’re welcome, Mr. Yun Fat.)

That’s the biggest unforgiveable sin in the movie.

The characters are confusingly hesitant. People just don’t want to do things in this movie. Goku spends the whole movie figuring out whether or not he is going to stop dicking around and start training seriously and fighting, when we already know he already trains seriously and fights, so his hesitation makes no sense. There are a lot of “Get the Hell on with it, why are you sitting around?” moments in this movie.

It’s another good improv rule that carries over well into certain types of scripted work. Let your characters be good at things already, and have them do stuff rather than talk about doing it. If they are good at what they do, we get to watch them do it well, which is fun, and then they get to move on to what the scene is really about. This movie fails on this constantly.

The whole bullshit with the solar eclipse and the prophesy and the idiotic poem and the horrible “Maybe I don’t have to destroy the earth” moment at the end of the movie.

Just to add insult to injury, this movie contains almost all of my least favorite awful action movie plotting crutches. People escape supernatural mind control just by wanting to, which they for some reason couldn’t do before they did it. Things that have perfectly fine reasons for happening need to happen because of some sort of irrelevant prophesy or destiny that is talked about a lot, but which never exerts any binding force on the characters’ actions and is a waste of everybody’s time.

Ugh, I’m starting to get a stomachache again just thinking about this piece of trash.

Thankfully, I decided to reward myself for watching this movie by also buying myself a copy of the #1 movie in America:

I’m getting psyched! Time to power up once more!

Have you ever wanted to watch a specific movie to feel better about an unfortunate turn of events? Sound off in the comments!