Throughout these five seasons of Lost, many conflicts have been set up: light versus dark, Good versus Evil, fate versus free will, progress versus cyclical time.  Today, I want to look back and what I had thought was the most important conflict of all in the show: the conflict of science versus faith.

If you look back to my very first post from so many weeks ago, you’ll see that I thought at the very beginning that the final conflict in the show would turn out to be between Jack and John Locke.  This Sunday (Sunday, Sunday), the Ultimate Showdown!  The Man of Science versus The Man of Faith!  Of course, the season finale just changed everything.  Now it seems like the big conflict is going to be the conflict between these two heavy hitters, Jacob and his mysterious evil-looking friend.  As time travel has gained importance over the past two seasons, fate versus free will has arguably overtaken science versus faith as the main question of the show.

But does that mean that the science/faith question has been answered?  I’d argue no.  To see that, we’ll have to take a closer look at Jack and John Locke. 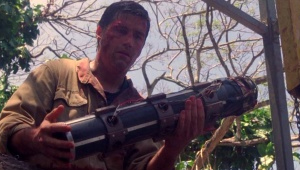 Running around with a bomb core. This is normal.

Let’s start with Jack.  Jack is the Man of Science, but what does that mean?  It doesn’t only mean he’s a doctor, of course.  It means he’s (theoretically) rational, logical, empirical.  He believes in what he sees and what he tests.  He doesn’t just believe for the sake of believing like some other people John Locke!

Rational, logical, empirical: Jack Shephard was all these things… back in season one.  Back then, Jack got a lot right.  He was right about “live together, die alone,” and I still think he was right to move everyone to the caves.  He wasn’t right about everything, but back then it was clear that he was at least making mostly-sensible decisions based on the facts on the ground.

Well, that’s changed.  Consider Jack in the first half of season five.  He wants to get back to the Island; that much is clear.  But why?  Because he’s depressed?  Because Kate dumped him?  Because John Locke told him leaving was the wrong thing to do?  Whatever the answer, it’s clear that season five Jack isn’t thinking rationally.  He’s being led by his emotions and by his selfishness—and he’s calling it “destiny.”

When he gets back to the Island, Jack gets worse.  He decides to blow up a nuclear weapon, which will either kill hundreds of people, including his friends, or reset the show completely.  His desire push the reset button could be seen as noble—after all, it would mean Charlie, Boone, Shannon, and lots of other people wouldn’t have died—but it also would have meant that Aaron would be given up for adoption, Ji Yeon and (probably) little Charlie would never be born, Kate would be in prison, Sawyer and Juliet wouldn’t hook up, and no one would have their Islandside redemption.

Jack doesn’t think about any of these things.  He just thinks, “If I stop the plane from crashing, maybe I can get Kate back.”  And aloud he says, “This is my destiny.  I can feel it.”

As Kate says, “Where have we heard this before?”  Jack has basically turned into John Locke.  The Man of Science has lost his rationality and become The Man of Faith.  And, like John Locke, Jack comes to believe he has a destiny.  Actually, he has to believe it.  It’s an emotional, not logical, need.  Locke needed to feel he was special to make up for his miserable life, and Jack now needs to feel he is special so he can fill the Kate-shaped hole in his heart.

Jack’s also stopped asking questions, too.  That’s what a Man of Science would do, ask questions.  But when he gets to the Lamp Post, does he say, “Hey, Eloise Hawking, who are you?  How do you know about this place?  How did the Dharma Initiative know to build it here?  How does it work?  How do you know Ben?  Why is Desmond here?  Are you really Dan’s mother?  How do you know John killed himself?  How did you get his letter?  And what do you know about the Island?”  No.  Jack does not ask any questions.  He just rolls with it, because he has faith.  “Take Ajira flight 316?  Okay, if you say so.”  Season one Jack would never be so trusting.

And that’s a bummer.  I would have like the answers to some of those questions. 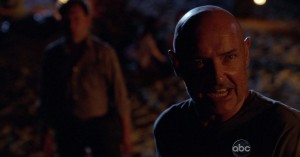 Once again, Locke was wrong.

But where is John Locke now?  It turns out Locke’s faith was wrong.  He wasn’t “special,” in a good way.  He was only special enough to be used as a pawn by a (probably) evil deity in some sort of mystical chess game.  He had faith in the Island, but the Island didn’t prevent his death.  He had faith in Jacob in the cabin, but that may have been Esau in disguise, tricking him.  Christian Shephard, too, was probably either Esau or one of his evil minions.  Locke had faith in humanity, but then Ben Linus tricked him and strangled him to death.

The first five seasons of Lost, therefore, show two arcs that mirror one other.  Jack starts out an unbeliever and turns into a believer.  Locke starts a believer and then is proven wrong, wrong, wrong.  So which side will ultimately win: science or faith?  Here are some (insane) theories on what might happen next: