Jack continues down his slippery slope into irrationality, becoming the Island’s new official Man of Faith—maybe even the replacement Jacob now that real Jacob is dead.  Real Locke returns somehow, maybe as a ghost or something, and realizes how wrong his faith was.  He becomes the new Man of Science.  In 2007, Jack and Locke kung fu fight!  Metaphorically speaking.  What I really mean is that they arrange themselves on opposite sides of this war that seems to be coming: Jack’s on Jacob’s side, because he now has faith in Jacob and the Island and himself, and disillusioned Locke is on Esau’s side, maybe to get back at Ben.  Locke does kill Ben, but is ultimately defeated by Jack and his Faith Forces.  (Jack and his friends Live Together; John Locke Dies Alone.)  In this ending, Jack also destroys his father’s ghost, because A) the ghost was one of Esau’s evil puppets and B) his father never had faith in him.  Jack can move on now, because he finally has faith in himself, and faith in the universe. He and Kate get married and live happily ever after.  Awww. 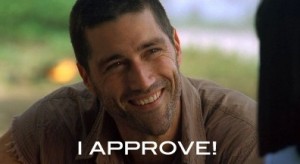 Jack approves of this ending.

Jack’s plan to blow up the Swan fails, so he becomes disillusioned with his faith and reverts to his old Man of Science self.  As for Locke, well, it turns out Fake Locke IS Real Locke’s ghost; he’s not Esau but just working for him.  Here’s how it happened: after Locke died, Christian Shephard, acting on Esau’s orders, came to Locke’s ghost and explained that he really was special all along.  Locke needed to die so he could come back to the Island and kill Jacob; Esau explains that Jacob is evil and will destroy the Island—which is true.  Jacob’s ultimate goal is to break humanity out of its cycle of violence and help them evolve to a higher plane of existence.  Doing that will destroy the Island, which is fine, because no one will need it anymore.

Ghost or not, Locke likes being told he’s special, and he still has faith that Christian Shephard is working for the good of the Island, so he agrees to be used by Esau.  Jack logically decides to join up with Richard, Ilana, and the Others to fight evil Esau, because Esau wants to kill them all.  Using the Power of Science!!!, Jack and co. win, and humans begin to evolve to a higher level of existence.  I’m thinking psychic angels.

Jack’s plan to blow up the Swan succeeds, leading to a reset, except the living main players (like Jack, Kate, Sawyer, and so on) hold onto their memories.  Jack, the new Man of Faith, and 2004 Locke (also a Man of Faith) join forces to defeat Esau, who wants to annihilate the violent human race.  (He has no faith in us, you see.)  But the power of love and a belief in the inherent goodness of mankind saves the day!  Jack and Locke allow themselves to die for the greater good, each having faith that their sacrifices will be rewarded.  Humanity lives on: Sun and Jin play with their daughter; Claire’s reunited with Aaron; Kate and Sawyer bond over the tragic deaths of Jack and Juliet; Hurley and Miles become partners in a ghost whispering organization and get a spin-off airing on ABC, Thursdays at 9/8 Central.  And, in heaven, (I can’t believe I’m writing something so sappy) Jack hugs his dad while Locke, Charlie, Libby, Ana Lucia, Mr. Eko, Juliet, and all the rest look on, smiling. 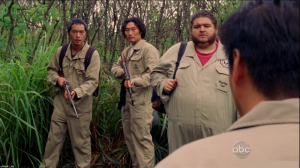 Option 4: The Power of Love Ending

In this version, Real Locke doesn’t come back to life in any way, shape, or form.  Jack’s plan to blow up the Swan fails, and he and the rest return to 2007.  Even so, Jack remains the Man of Faith, because true faith cannot be shaken by an exploded nuclear bomb.  (Alternatively: his faith is shaken, but he and Kate get back together, so he gets his faith in humanity back.  Blah.  I can definitely see the writers doing this.)  Either way, Jack remains the Man of Faith, and Fake Locke/Esau is now the Man of Science, because he believes in the empirical evidence that proves that mankind is an evil, corruptive force.  Jack’s faith in humanity and the power of his love—along with the love of Sun and Jin, Sawyer and alive Juliet, Des and Penny, Rose and Bernard—solidifies into some Great Care Bear Stare of Faith and Love that destroys Fake Locke/Esau.  (What about Sayid, Miles, and Hurley, you ask?  They’re all dead because they’re not in a couple.  Same goes for Ben and Richard.  This is the Power of Love ending.  Singles not welcome.)

Option 5: The “This is What I Hope Happens” Ending

After Jacob’s death, Esau skeedaddles out of Ghost Locke, leaving him to be his usual, badass self, and instead takes over Ben Linus, seeing as that would probably be a lot more fun.  (And it is.)  Jack flashes to 2007 to catch up with Real Ghost Locke, and somehow they realize that science and faith aren’t necessarily mutually-exclusive concepts, especially when you interpret the word “science” as “logic” and the word “faith” as “belief in yourself and the inherent goodness of humanity.”  Jack and Locke kiss and make up and, using their dual powers of logic and optimism, defeat Super Esau/Ben Linus and save the world.  The end.

Option 6: The “What Will Actually Happen” Ending

The last seventeen episodes are completely surprising and unpredictable in every way.  Still, they are (hopefully) awesome.

Next time on Overthinking Lost: Destiny!  Destiny!  No escaping that for me!

A note on spoilers: Now that we’re all done watching season five, spoilers for everyone!  Write whatever you want in the comments!  The only thing I will not accept is spoilers for the coming season.  For instance, if you know which actors are returning, or if you heard something spoilery at Comic Con, I don’t want to hear it.  Speculation, however, is a-okay.