Enjoy today’s guest post by Chris Richards: some much-needed Overthink on the Legend of Zelda series. If you like it, or even if you think it’s out there, sound off in the comments!

Over the last three decades, there are few videogame franchises that maintain their marketing tour-de-force for longer than a few years. Halo has dimmed, Mario is no longer a staple of every game-based living room, and poor Sonic doesn’t even have a system anymore (or any real following that doesn’t rely on nostalgia…and even Stretch Armstrong can sell via nostalgia). But one franchise that has endured, and has actually grown in prominence, is The Legend of Zelda.

When the first game came out, it was popular enough, to be sure. But it wasn’t THE game. Mario Bros. 3 certainly sold more cartridges. But, over the years, the Zelda cult has grown to the point that its
hero, Link, is now more important in launching Nintendo hardware than Mario. Pretty impressive for a semi- androgynous, poor-and-uneducated, forest farmboy.

At the center of the whole series is a mystical artifact called the Triforce, a triangle-shaped golden MacGuffin of amazing power and influence (which we see little of, really). The Triforce was given to
the people of Hyrule by the Three Gods, Din, Nayru, and Farore, and contains their purified essence. After all the hoopla over the thing, you’d think that it would really be world-changing, like the One Ring or The Box of Ordon or Two Tickets of Transit. But no, the Triforce not only fails to live up to the hype, it also fails to live up to its own description. For the sake of this argument, I’m basing my arguments on The Ocarina of Time, but most of the Zelda games are just retelling the same story with new inconsistencies (there is no
Triforce of Plot Coherence)

For those of you who have never played a Zelda game, and yet are still reading this article, the Triforce is divided into three sections: Power, Wisdom, and Courage. When a person who balances these three
divine essences touches the Triforce, it will give Hyrule happiness. If someone touches it who values one over the other two, they will keep that part while the remaining pieces are given to the people
throughout Hyrule that value them the most. So, when Ganon finally gets it, he is left with the Triforce of Power while the Triforce of Wisdom goes to Princess Zelda and the Triforce of Courage goes to our
noble hero Link. 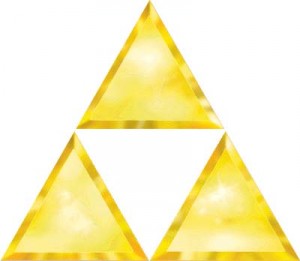 More useful in geometry class than the One Ring.

Yet, is the Triforce supposed to enhance these abilities or merely be attracted to them? Either way, it doesn’t seem to work very well. Let’s start with Wisdom. Princess Zelda knew Ganon was trying to
steal the Triforce, yet who is the only person she tells this to? Some random kid from the forest that she just met. And yes, I know that she thinks that Link is the answer to a “prophecy” in her dreams. Did Eisenhower trust D-Day to Gomer Pyle because a dream told him to? No, he used the full might of his armed forces to storm the beaches. Zelda, rather than using the full force of the Hylian Royal Guard to retrieve the precious Triforce, Zelda sends Link off to do the job. Not the Wisest move ever.

But maybe it’s not that she is wise, maybe she VALUES wisdom. That’s possible, right? And, if she has the Triforce, it might make her wise. Yet, after getting hold of the Triforce, Zelda doesn’t flee or rally the people of Hyrule against Ganon, nor does she come up with some clever plot to keep people safe. Instead, she hides and waits for the better part of a decade until Link returns. Again, not very “wise” of her. Now, Wisdom is a tricky thing to argue, since the concept of Wisdom is itself so ephemeral. In fact, that game’s makers seem to be counting on it. But there are a couple of universally wise traits, and Zelda shows none of them.

Pictured: the wisest person in Hyrule.

Most people we consider Wise take advice from others and use the best elements. Zelda, however, fights Ganon without EVER listening to anyone else’s advice (which is what opens up the Sacred Realm and the
Triforce to Ganon in the first place). Also, while most Wise people make careful, nuanced decisions, nearly every play in the Zelda Gameplan seems to involve getting magical objects immediately to kill Ganon. Ganon’s trying to get the keys to the Sacred Realm? Get them now. Ganon can only be reached by someone with the Spirit Medallions? Get them now! Ganon can only be defeated by someone by someone with a magical Light Arrow? Get it now! Patience is not a virtue Ms. Zelda seems to put much stock in.

And with Link, the Triforce notion is even more ridiculous. Link is plenty courageous before he ever has the Triforce piece, and there seems to be no sudden shift in his courage when he has it (in fact, he
has it for half the game without realizing it). In fact, I would argue that Link’s MOST courageous act
comes before he ever lays eye on the Triforce. As a 7-year old kid, he stands in Ganon’s way, just after Zelda has fled because Ganon has decimated Hyrule Castle and its army. How much more Courage can this
thing possibly give him? The Triforce’s effect is essentially zip. 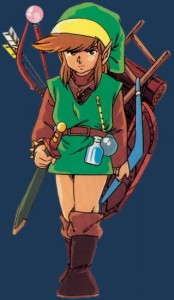 The toughest man in Hyrule ... 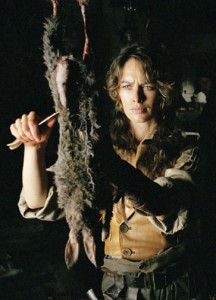 ... looks suspiciously like Lena Headey from The Brothers Grimm.

The same goes for Ganon, who is powerful enough without the Triforce to take down Hyrule Castle and depose the Royal Family. Once he has it, he gets beaten up by a teenager with a sword. And yes, I know the Triforce keeps him from dying. Remember that he has the Triforce of Power; you’d expect it to give him something. But Ganon was a hyper-powerful dark magician before he has the Triforce, and he’s the
same after. What gives? What is so great about the Master Sword (the mystical weapon uses to strike down Ganon) that it can defeat the Power of the Triforce, an artifact imbued with the power of three
gods? Certainly, the Master Sword is an enchanted blade, but was it enchanted by three gods?

Basically, everyone in this game acts exactly the same, before and after they have their slice of the Triforce. I love the Legend of Zelda games, to be sure; but there are some problems that seem just
too severe to ignore. The Triforce is not like the One Ring, which actually does give its wearer some awesome powers (just not very useful ones). Instead, it’s closer to the Maltese Falcon. After half
the characters in the movie have died for the priceless statue, it is revealed to be a phony, a cheap knock-off. Everything done over it really was for nothing, and it didn’t help anyone accomplish anything.
The Triforce is the same, except with even more disappointment.

Ganon scours the whole of Hyrule to get his hands on the Triforce, and he still ends up stabbed in the face (literally, stabbed in the face). Zelda can’t avoid getting captured (which, is actually a lot better than what happens to most deposed rulers in exile when they’re finally caught), and Link is brave regardless. The Triforce comes out of this seeming pretty worthless. In fact, Nintendo can’t even copyright the
damn thing, because it’s just a basic geometric shape! It seems that the only thing the Triforce is good at is Geometry Class, and that’s just a sad ending to any videogame. It’s a good thing The Legend of
Zelda has swords, because otherwise most of its audience might have seen through the façade and picked up something else. Just think, we might all be playing Vectorman, a game with even lamer geography-based gameplay. If nothing else, at least the Triforce is better than that.

Tell us what you thought of this guest post in the comments!