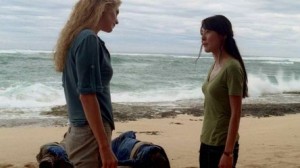 Phew!  We made it.  Here we are at the end of Lost’s third season, and, man, was it awesome.  Awesome awesome awesome.  You guys were right; sitting through those mediocre episodes was worth it.  Thanks for helping me stay the course.

Season-wise, we’re officially halfway through the series, if you include the as yet unaired sixth season.  I want to step back this week and take stock of the series as a whole… through the power of mathematics!  Well, not really, but I’ll be tallying numbers and writing lists.  That’s almost math-y, right?

Anyway, through this pseudo-mathematical analysis, I will answer the following questions: Who are  the most important characters in Lost, really?  Who’s evil-er, the Losties or the Others?  And the big question: why watch the show when its major mysteries are never answered?  Obviously, I won’t be able to come up with a real Grand Unified Theory of Lost just yet, but I’m hoping that, by stepping back and looking at the big picture numerically, I’ll be able to wrap my mind around the series a little better before I leap into season four.

But first, as usual, the episode summaries:

Episode 3.17 (“Catch-22”): In the past, Desmond was a monk, but apparently that wasn’t his true path.  In the present, Des has a vision that Penny parachutes onto the Island, but it can only happen if Charlie dies.  Unsurprisingly, Des does not let Charlie die.  Somewhat surprisingly, the parachuter is not Penny.  Also, Jin tells a hilarious ghost story.

Episode 3.18 (“D.O.C.”): I love Sun!  I love Jin!  Anyway…  In the past, Sun paid off Jin’s whore mom so she wouldn’t tell Jin his mom’s a whore.  But!  This indebted Jin to Sun’s dad.  In the present, Mikhail helps Des and the rest save the life of parachuter lady (Naomi), and Sun—who I love, by the way?—demands answers from Juliet, because Sun’s the only one on the Island with the cojones to do so.  Juliet ultrasounds Sun, revealing that yes, the baby is Jin’s, but that Sun will die in the middle of her second trimester, like all the other preggers ladies on the Island.  Also, we learn from Naomi that Oceanic Flight 815 has been found, along with all of the dead bodies of the crew and passengers.  Which supports my new Grand Unified Theory of Lost: evil mirror universes, ala the ones in Star Trek!  Please?

Episode 3.19 (“The Brig”): A week or so ago, Ben told Locke he could join the Others, but only if he killed his father.  Locke couldn’t do it.  So!  Locke gets Sawyer to do it, ‘cause, unsurprisingly, Locke’s dad is the real Sawyer.  Fabulous drama ensues nonetheless.  As a reward for his cold-hearted act of strangling his dad with a rusty 19th century chain from the Black Rock, Locke gives fake!Sawyer (a.k.a. James) proof in the form of a tape recorder that Juliet’s working with Ben to capture Team Jack’s womens.

Episode 3.20 (“The Man Behind the Curtain”): Hey, I already called Ben the man behind the curtain five weeks ago!  Nevertheless, GREAT episode.  In the past, Ben was a shy kid who was verbally abused by his dad because his mom died giving birth to him.  Little Ben sees his mom in the woods but she says it’s not time yet, whatever that means.  He also sees Richard—who is the same age as he is now in the present!  Thus supporting my ridiculous theory from two weeks ago that a group of immortal humans was placed on the Island by aliens back in prehistoric times!  Or, time travel could explain this, too, I guess.  When Little Ben grows up, he kills his dad—who by the way was the skeleton in Hurley’s VW bus—along with everyone else in the compound, for some unknown reason.  Dude, Benny.  That was cold.

Meanwhile, in the present, more craziness!  Locke—who is just getting more and more awesome, isn’t he?—intimidates Ben into bringing him to the ever-mysterious Jacob.  Ben brings Locke to a creepy shack and then talks to a chair.  Locke, understandably, thinks Ben is a nutjob, but then invisible man Jacob starts throwing things and says “Help me” to Locke in a spooky voice.  WTF!  Then Ben totally shoots Locke in the chest!  Okay, my sitting through all those shitty episodes at the beginning of the season was officially worth it. 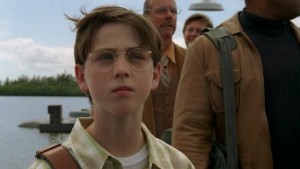 Episode 3.21 (“Greatest Hits”): Desmond tells Charlie that he has to die—yes, for real this time, in order for Claire and the baby to get off the Island.  Charlie’s going to have to swim down to the Looking Glass hatch and flip off the switch that is jamming all communications into and out of the Island.  Then he’ll drown.  So Charlie starts writing a list of the top five moments in his life and totally makes me cry.  Damn you, Lost.  I didn’t even like Charlie that much and now you’re making me cry over him?!  But then when Charlie swims into the Looking Glass he finds out that A) it’s not flooded and B) he’s surrounded by crazy gun-toting women.  I… I didn’t expect that.

Episode 3.22 (“Through the Looking Glass”): In the Evil Mirror Universe (or possibly the real future, although that’s way less interesting than alternate universes), Jack has a beard.  Just like Evil Spock!  Future Jack is a suicidal, drug-addled mess, ever since a certain unnamed someone died.  (This might be crazy, but I think that someone is Ben Linus.  Why else would nobody go to his funeral?)  Mirror Jack wants to go back to the Island.  He’s made a huge mistake.

Meanwhile, in Universe A (or should we call it Universe 1?), Sayid, Jin, and Bernard stay behind on the beach to blow up the Others while Jack and Rousseau lead the rest to the radio tower to shut off Rousseau’s creepy French message and use Naomi’s satellite phone to call for help.  But this’ll only work if Charlie manages to turn off the jamming signal in the Looking Glass.  He does, with the help of Desmond, but only after Mikhail, the man who never dies, grenades the station and floods Charlie to death.  But before he dies, he gets a message from Penny: she’s not on Naomi’s boat.

Meanwhile, meanwhile, Ben finds out what’s going on and tries to convince Jack he’s making a huge mistake by trying to leave the Island.  If he leaves the Island now, really Bad Things will happen!  He also orders Tom to kill Sayid, Jin, and Bernard.  Tom doesn’t, and is rewarded by being shot to death by Sawyer (James?) who I think has cracked a little bit since he killed Real Sawyer.  Locke knifes Naomi, Jack beats up Ben, and they all get a message out to Naomi’s boat, which is coming over to rescue them.  Yay!  But, actually, boo!  Because the boat will apparently bring them to Evil Mirror Universe Future, where people have grody beards and reenact scenes from It’s a Wonderful Life on a regular basis.

Before we start this week’s posts, a few disclaimers.  1. The numbers herein may not be completely accurate, but they’re at least close.  I’m saying I tried.  God knows, I tried.  2. I’m sorry I rushed on the numbers, but I’m about to go on vacation.  Please excuse my vacation-induced laziness.  I’ll make it up to you in the future.

And now, without further ado, Lost By Numbers.