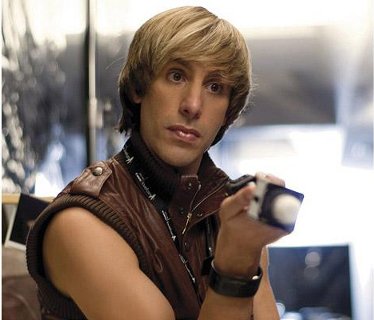 They are mirrors held up to the public, in which we should never admit to seeing ourselves.

The trick with Bruno, and indeed the trick with Moliere, is how to laugh at it. Because it is certainly not amoral to laugh at the flaws of a ridiculous person who persists obliviously in his ridiculousness – you are making a value judgement about an undesirable behavior. The laughter is not just the sound of a lesson landing in your brain, it is a recognition of the truth of what is going on – the degree to which it represents the flaws of our own time and all of us.

Moliere’s style of comedy thrives when people do not take the ridicule of behavior personally – when they acknowledge  people have flaws, and that admitting to their existence does not mean one is inviting personal disrespect on an essential level.

Moliere’s audience wanted to be ridiculed – they would approach him and list their flaws for him in the hopes of appearing in his plays. When people see a person like themselves being made fun of, and they are unable to separate themselves from it just a little bit and laugh at people and the world and how it is – when they can’t do that, well it tends to wither and fail.

Cohen’s is similar, even when it isn’t as heavily narrativized. When we laugh at “Throw the Jew down the Well,” it is not just because Southerners or Cowboys are anti-Semitic, we’re laughing at something we all know but aren’t really at liberty to talk about publicly for fear of getting too personal; which is that anti-Semitism is still out there and alive and well in America, and that it is a ridiculous behavior worthy of our derision.

Now, we can laugh at it safer when we are not threatened by it personally – so, in that sense, Borat’s existence is a very good sign. We can laugh at how anti-Semitic he is because we do not fear in our guts that behavior is not strong enough in our own time to hurt us or our friends. Oh, we fear it like Steven Colbert fear bears (justifiably), but not like we fear something like cancer.

So, yes, Bruno is a gay stereotype, but let’s be honest, a lot of us have seen behavior like that in our gay friends, in our straight friends and in ourselves. Our own little sense of our sexual grandiosity. Our overestimation of our own fame, attractiveness or excellence. As long as we put somebody else’s face on it, place it within the refuge of the performing arts, we can laugh at it without the reality of having to face it carry with it the hurtful effects that prompt people who do not see movies like this to stand outside the theatre and decry it.

(Not that anybody did that with Bruno)

And in the end, let’s be honest, do we really expect such things to get better? I mean, it’s nice when the Blades of Glory guys discover the value of friendship or whatever, but when that celebrity I didn’t recognize says that Jamie Lynn Spear’s fetus ought to be aborted because of her insufficient celebrity – I’m going to come out and say I think that sentiment is a real part of our culture, and I don’t think it’s going away. It’s something we’re all welcome to laugh at, but I don’t expect it to be reformed. Extra ain’t going anywhere folks, so we might as well laugh at it.

When I classify comedy and drama for people, I often say, “Drama is about people changing. Comedy is about people not changing.” If we divide the world of comedy into Ron Burgundies and Brunos – which path for comedy do you think is proper, superior, or more justified? Ron ends up the same, but redeemed. Bruno just ends up Bruno, still an idiot, still a lost cause, even with Bono doing backup vocals.

Does this strike a moral chord with anyone? A comedic one? Sound off in the comments!