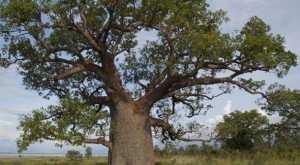 I once heard a story… “Whatever blooms from the Baobab is given back to the earth, because the mighty tree never forgets its roots.” Like the mighty Baobab, McDonald’s and I will not be moved.

You’re not going to believe this, but the statement above is a direct quotation from the official McDonald’s website. First of all, it makes no sense. The tree gives back to the earth, and the speaker “will not be moved.” I don’t really get the analogy. And I really don’t get how McDonald’s factors into it. Does McDonald’s give back to the earth? Is McDonald’s impossible to move? Here’s my best shot: McDonald’s gives the speaker the strength of a mighty tree. But it’s certainly a confusing way to put it, not to mention a silly thing to say. Not only that, McDonald’s is equating itself with one of the most sacred trees in African folklore, known as “the tree of life.” That seems sort of disrespectful to the culture they’re pandering to, and gloriously ironic given how unhealthy McDonald’s food is and the high rate of obesity among African-Americans.

So basically, it’s not the best two sentences of marketing copy ever written. But the Baobab quote is merely the gateway to something even stranger: 365black.com, McDonald’s special website for black people. I promise you this is real. 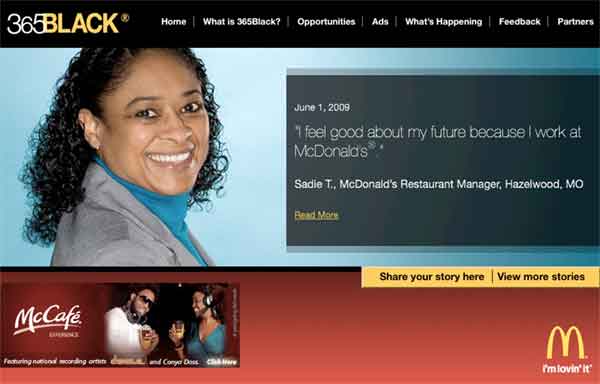 If you’re like me, you will stare at this for a while, and then click on “What is 365Black?” The site explains:

At McDonald’s, we believe that African-American culture and achievement should be celebrated 365 days a year — not just during Black History Month. That’s the idea behind 365Black.com.

Okay, so it’s a website about black history? No. Not at all.

It’s a place where you can learn more about education, employment, career advancement and entrepreneurship opportunities…

Of course, all those scholarships and jobs they’re talking about are available to everyone, not just African-Americans. I don’t see how posting a link to the general McDonald’s employment page is celebrating African-American culture. But there’s one more thing…

…and meet real people whose lives have been touched by McDonald’s.

Every month, 365Black posts testimonials from African-Americans with some association to McDonald’s (everyone from regular old employees to Monopoly contest winners). Last year, they did as many as five profiles a month–in 2009 they’ve averaged only one, and they flaked out on March entirely.

The site also has a “What’s Happening” page, which is where they seem to hide the stuff that’s most relevent to the idea of “celebrating African-American culture.” For instance, McDonald’s is sponsoring a Gospel tour, with free admission. That’s great, as are the scholarships and career opportunities. What I’m sniping at here is the questionable marketing decisions, from the name of the site on down. From the “What is 365Black?” page:

Like the unique African Baobab tree, which nourishes its community with its leaves and fruit, McDonald’s has branched out to the African-American community nourishing it with valuable programs and opportunities.

Is it just me, or is this pretty damn condescending? It’s also poorly written and missing a comma after “African-American community.”

But that isn’t the only minority they’re condescending to. 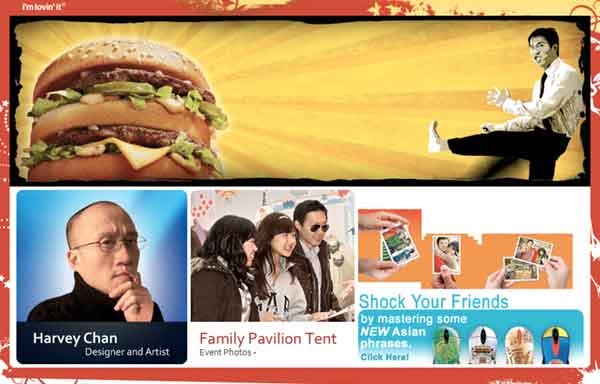 Say “konichiwa” to myinspirasian.com, which may be the single worst website title on the entire internet. First of all, Asians hate being lumped together as Asians, so that’s a great start. On the home page, watch past the McCafe commercial to see an ad with a man karate-chopping next to a Big Mac, which is surrounded with rays uncomfortably reminiscent of the Japanese imperial flag. The first link on the menu bar goes to a page celebrating Asian Pacific American Heritage Month, which was last month. This page teaches you to say non-stereotypical Asian phrases like “Check out my new cell phone” and “Let’s go do some karaoke.” This one says that the “Family Pavillion Tent” will be showing up at various Chinatown street festivals, which sounds exciting until you see the photo gallery. McDonald’s, if those are the only six photos you have, just forget it. 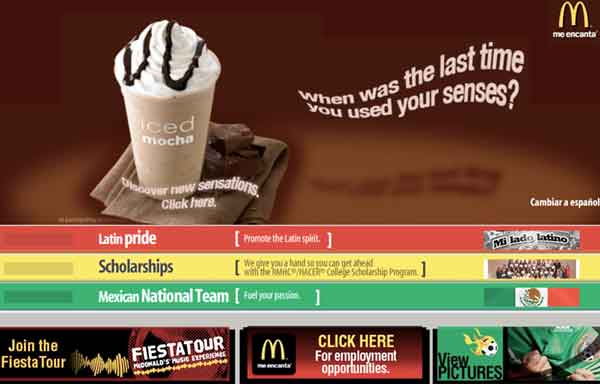 On this site, you can see some futbol tips from Mexican soccer star Missael Espinoza. At least I assumed he was a star. But looking at his Wikipedia page, he doesn’t seem that great–in his only World Cup appearance, he rode the bench the whole time and didn’t play a single minute. Plus, he’s been retired for five years. MeEncanta also has info on the Fiestatour, a mobile exhibit of Latin artist memerobelia (Gloria Estefan, not Frida Kahlo). And the site offers a good section on getting into college, with info on special scholarships.

My favorite part of this site is the “Latin Pride” section. There’s a colorful “Mi Lado Latino” graphic, and buttons to click that say “Sticker,” “T-shirt,” and “Poster.” But when you click on the “Sticker” graphic, all you get is the image and instructions to print it out on adhesive paper. Clicking on “T-shirt” shows you the image with instructions to print it on transfer paper. And the “Poster” link just downloads a really big image. Presumably, you have to bring it to Kinko’s to actually get a poster made. There’s something pretty mind-blowing about the fact that McDonald’s doesn’t care enough to actually produce its own “Latin Pride” t-shirts. They haven’t even heard of CafePress, apparently.

Here’s something to consider. On 365Black, the benefits of working at McDonald’s are touted in a giant slider on the front page. On MeEncanta, the page is dominated a McCafe ad, and “employment opportunities” is a little button at the bottom. On MyInspirAsian, you won’t find the word “job” or “employment” anywhere on the front page. You do, however, see a picture of a “designer and artist” in wire-rim glasses and a sweater.

I guess a basic question is, does it make sense to create these standalone mini-sites for particular ethnicities? Burger King isn’t doing it. Wendys isn’t doing it. So either McDonald’s is smarter than its competitors, or dumber. Or more experimental.

But let’s play devil’s advocate and say McDonald’s in onto something. After all, isn’t the future of the web about narrowcasting and creating microcommunities? If you’re a giant company with a diverse audience, why not create a bunch of different landing pads? Is this really much different than Disney creating one site for children who want web games, and another site for adults who want vacation planning tools?

But even if you think the concept of ethnic sites has merit, surely these three aren’t the best they can do. On the other hand, I did learn to say “Text me” in Indian.