Who you gonna call?

The Ghostbusters had a problem. They needed substantial start up funds to cover the cost of containment units, proton packs, the receptionist Janine’s salary, and other business expenses.

Who you gonna call?

STANTZ
(perturbed)
My parents left me that house, I was born there.

VENKMAN
You’re not going to lose the house.
Everybody has three mortgages these days.

STANTZ
But at nineteen percent–you didn’t
even bargain with the guy.

SPENGLER
(calculating)
Ray, for your information, the interest
rate alone for the first five years comes
to $95,000.

The Ghostbusters, it would seem, were not particularly financially savvy. In fact, it’s a miracle they didn’t run out of cash shortly after starting up.

First, let’s assume a very basic loan calculation: 30 year term, 19% fixed interest rate, interest compounds monthly. The value of the loan works out to about $100,000–a fair amount of cash–but the finances are punishing: 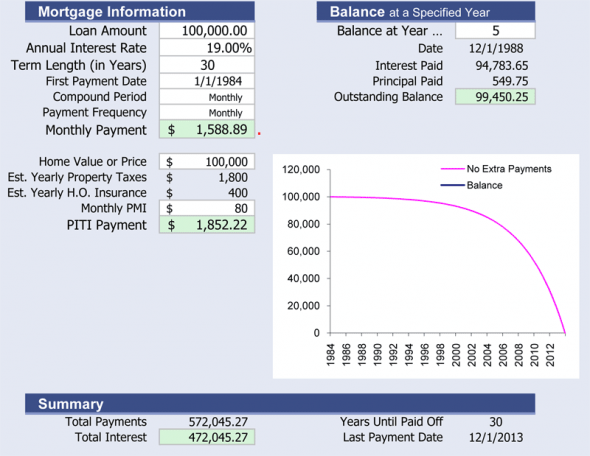 But the mortgage is only the start of the Ghostbusters’ shaky financial standing at the beginning of their venture. Think of their tremendous start up costs. For example, we know from the film that Ecto 1 cost $4,800–before extensive repairs to its “suspension, shocks, break, break pads,” etc.  And how about the rent on their massive headquarters building? According to this version of the script, Egon calculates the square footage of the “four-story fire station” to be exactly 9,642.55 square feet. Even with one assumes a dirt-cheap rental rate of $10 per square foot per year (which seems reasonable according to this 1989 New York Times article on the subject), the monthly rent comes out to $8,035.46.

Even with very conservative estimates on upfront start up costs (ecto-containment systems, proton packs) and recurring expenses (Janine’s salary, advertising, all that electricity), we see that the Ghostbusters would quickly eat through their startup capital: 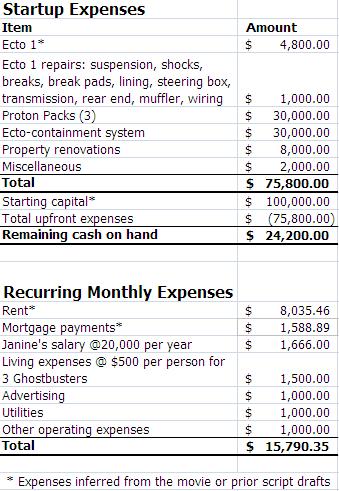 There are of course some serious unknowns in this sample budget (can anyone give an estimate on the cost of an ecto-containment system), but one thing is clear: they needed to start pulling down serious cash within the first crucial months of operation, or Ray really would have lost his house.

BONUS POSTSCRIPT: You can (sort of) play out all of the above in the 1984 video game version.

It’s easy to forget that the struggles of starting and operating a small business are an important part of the Ghostbusters mythology when the fantastical aspects are so alluring. But surprisingly, the 1984 video game adaptation for the Commodore 64 captured this entrepeneurial spirit (pun intended) quite well. Edge Online takes us back to 1984 and the days of the 5 1/4″ floppy disks:

Though players could lay traps and fire proton guns, drive Ecto 1 and scamper between the giant feet of the Stay-Puft Marshmallow Man, the core of the gameplay was a business simulation with a heavy emphasis on strategy…Rather than letting you control one of the movie’s Ghostbusters, the game let you actually become a Ghostbuster more directly – by setting up your own franchise, stocking up with equipment and despatching teams around the city to catch spooks and make money.

It’s all true–I played this game obsessively back in the day–and it was great fun. Here’s a taste of the action:

Notice what your reward is at the end of the game. Fame? Glory? Sigourney Weaver? Nope. You get “a $5000 reward from the city,” but perhaps more importantly, “the bank will raise your credit limit to $726300.”

Hmm…the game manual says nothing about over-leveraging. How could this possibly go wrong?