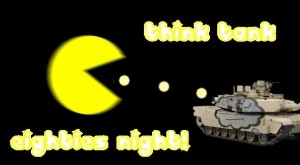 Today the Overthinking It staff tackles the pressing question of which 80s franchise they would most like to see revived, inspired by the upcoming Ghostbusters revival and by our general obsession with the decade of (many of) our births. By the way, Were You Aware that Beverly Hills Cop, Robocop, Short Circuit, Escape From New York, The Thing, Scanners, and Police Academy are ALL scheduled for sequels or remakes?  Truly, there is no new thing under the sun.

Read Part 1 today, and stay tuned for Part 2 tomorrow—and your chance to vote for the winner. 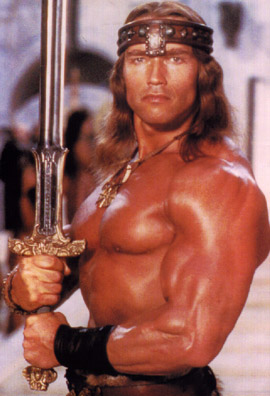 I always liked the Schwarzenegger Conan the Barbarian movie, but I didn’t truly get the awesomeness of Conan until I read Robert E. Howard’s original stories. Howard wrote pulp fiction during the Depression, for magazines like Weird Tales and Fight Stories. And when you read his stuff, you feel like a ten-year-old reading under the covers by flashlight. Here’s the beginning of an early Conan story, “The Frost Giant’s Daughter”:

The clangor of the swords had died away, the shouting of the slaughter was hushed; silence lay on the red-stained snow. The bleak pale sun that glittered so blindingly from the ice-fields and the snow-covered plains struck sheens of silver from rent corselet and broken blade, where the dead lay as they had fallen. The nerveless hand yet gripped the broken hilt; helmeted heads back-drawn in the death-throes, tilted red beards and golden beards grimly upward, as if in last invocation to Ymir the frost-giant, god of a warrior-race.

Goddamnit, Robert E. Howard, you are a magnificent bastard! I love the way this guy writes. He just goes for it, you know? A lot of people will dismiss this as pretentious cheese, and maybe it is. But it’s the most glorious pretentious cheese ever put to paper.

Now I’m not going to deny that the second Conan film, Conan the Destroyer, is pretty weak sauce. (For starters, the producers wanted the violence toned down to get a PG rating.) But the third film is already written, and by all accounts it is awesome. It’s by the screenwriter of the original, John Milius, and it’s called King Conan: Crown of Iron. The title alone makes me happy.

I’m just going to quote some of the awesomeness that this screenplay contains, as recorded in this script review. Here’s Conan, imparting some wisdom to his young son.

CONAN: Remember how I showed you my father’s sword?

CONAN: It was not my father’s. I broke my father’s sword with mine. He told me to trust steel, not men, women, animals. I trust nothing but my will and instinct. Trust no one, boy… not any of this. If gods live here, they are treacherous and dark. Trust no one but the wind and the cold night sky. Make them your friends and you won’t need this. You won’t need me.

CONAN: No… someday you must break my sword. Now let us go and eat their beeves and pigs and watch their women dance for us.

Look, am I crazy, or is this the greatest screenplay ever written? I’m imagining this on the big screen, with Arnold staring into the distance like the proud warrior he is, and I want it. Bad. And by the way, “beeves” is a real word. I checked it out.

One more quote, then I’ll give it a rest. Remember Conan’s prayer to Crom in the first movie? Well, he’s got another one here:

CONAN: Crom! Again we are here. One thing I know… you are watching, you old wolf! The odds are long again, you enjoy that. If I die, we will meet in Valhalla, I will eat at your table. And if I live, you will find other ways to torture me. (Conan salutes the sky.) I hope you enjoy it! 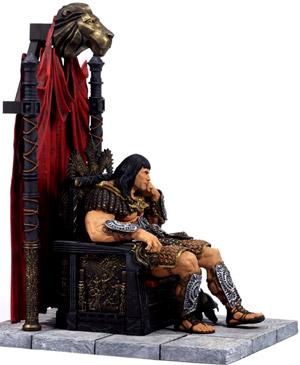 This screenplay has been kicking around since 2001, and I’m pretty sure it will never get made. Even if Arnold returns to Hollywood, I don’t think he’s brave enough to do this. This is a crazy movie. It’s 146 pages of pure fantasy, on a Lord of the Rings scale. This is not a movie for someone who is at all concerned with looking silly. You have to be fearless to wear those sandals.

And besides, I’d bet Arnold doesn’t want to be a berserker who chops people’s heads off by the dozens. He wants to be family-friendly. And that is a damn shame, because this could easily be one of his greatest movies ever.

So Crom! I know not if you hear my words. You delight in taunting us fanboys with shadows of things that can never be. But grant me this one request: grant me Crown of Iron!

And if you do not listen, then to hell with you.