Eurovision’s kitschy, over-the-top performances may get all the attention from most casual observers, but I’m going to root for the underdog in this fight: Portugal, which has been in the  competition since 1964 and has never won. This year, they’re represented by the decidedly un-kitschy “Todas As Ruas Do Amor” by Flor-de-Lis:

I know, this is pretty boring to watch, right? It’s not even particularly noteworthy from a musical perspective. But allow me to put forward a couple of reasons why it might win:

But why does it deserve to win? Is there any musical or artistic justification for this song to take home the prize?

Oh, wait, this is Eurovision we’re talking about here. I’ll stick with the crackpot theories on patterns and statistics. Go Portugal! 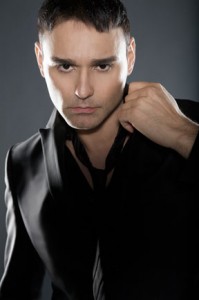 First of all, I know what you’re thinking: “Wasn’t Krassimir Avramov seriously hurt in a dress rehearsal this week?” We’ve all heard the rumors. But I found Krassimir’s gloriously mistranslated press release, which told me that:

The information that appeared in the medias about Krassimir Avramov and the accident he has have is figured out and not real.

So I clicked through all the songs, looking for one that would make me cringe in embarrassment but keep watching in fascination. Bulgaria did it for me.

Fake lightning and real fire is never a bad first impression. Nor is wearing chain mail. The interpretive stilt dancing was a nice touch. But I think it’s the operatic falsetto that really nails it for me. Kassimir has this great habit of sending his voice up two octaves for no reason, sounding vaguely like the lady from the Star Trek theme song. He’s his own backup singer. (Watch at about 1:50 for the full effect.)

It turns out that this guy comes with a nice, juicy backstory. Back in February, Bulgaria picked its Eurovision entry via cell phone voting. There were 12 songs in contention, and Krassimir got 55% of the vote. The second place entry got less than 12%. There was a movement to have him stripped of the victory, but Krassimir declared, “God decides who wins and who doesn’t.”

Which made me wonder, wait, why doesn’t the Vatican have a Eurovision entry?! It’s technically a European country, right? How great would that be?