The 1980’s may have been morning in America, but children’s animation was full of nightmares. There was The Secret of NIMH (1982), in which a mother mouse struggles desperately to save her babies from drowning in the mud as they cry out in terror. There was The Black Cauldron (1985), which was so dark that Jeffery Katzenberg was afraid it would get a PG-13 rating, and made animators remove scenes like this. There was The Land Before Time (1988), which begins with the main character’s mother getting killed by a T-Rex.

But there’s dark, and there’s The Brave Little Toaster (1987). This movie is twisted.

A John Lasseter sketch, from back when he wanted to make a computer-animated Brave Little Toaster.

In some ways, Toaster was a dry run for Toy Story. It’s about inanimate objects that talk and move when people aren’t around, and their fierce love for a little boy. Both movies center on the objects’ struggle to be reunited with their owners. In both movies, the objects obsess over becoming lost, broken, or unwanted.

These similarities may be more than a coincidence. In the early 80’s a Disney junior animator named John Lasseter had the crazy idea of making a computer-generated feature. Years later, he recalled:

A friend of mine had told me about a 40-page novella called “The Brave Little Toaster,” by Thomas Disch. I’ve always loved animating inanimate objects, and this story had a lot of that. Tom Willhite liked the idea, too, and got us the rights to the story so we could pitch it to the animation studio along with our test clip.

The Brave Little Toaster became a traditional 2-D feature in 1987. The story is about a vacuum cleaner, a radio, a lamp,  an electric blanket, and of course, a toaster. They live in a cabin in the woods, which hasn’t been visited in years. Everyday the appliances wait, broken-hearted, for their beloved “master” to return for them. It is pretty much the saddest thing ever.

Video after the jump.

By the way: yes, the vacuum cleaner is Tony the Tiger. (Hey, did you know that the voice of Tony the Tiger is the same guy who sang the “You’re a Mean One, Mister Grinch” song?)

The appliances decide to go on a dangerous and totally terrifying journey through the woods to find their master. Eventually they wind up in a junkyard, where the broken-down cars sing the blues as they are brutally executed, one by one.

Keep in mind, I have not even gotten to the dark part yet.

Our heroes’ beloved master arrives at the junkyard, looking for cheap stuff to bring to college (this was pre-IKEA, of course). He sees (and somehow recognizes) his beloved appliances. But while trying to grab them, he’s picked up by a giant magnet and pinned to a conveyor belt, heading towards the crusher. What happens next used to haunt my dreams.

Can I swear on this blog? Is that alright? Okay, I’m going for it.

WHAT THE FUCK, ANIMATORS? ARE YOU ALL INSANE?? 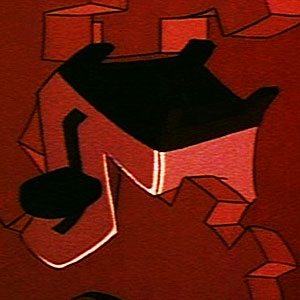 This is a children’s movie about an adorable talking toaster. And at the end of the film, he jumps face-first into industrial machinery. We watch him get ripped apart. The fact that anyone thought this was appropriate for children amazes me.

By the way, it’s not like that ending was part of the original book, and the animators were just being faithful to the story. The book does not end with a horrific appliance suicide, because Thomas Disch was not a sadist who liked to make little kids cry.

Now of course, the very next scene shows the master repairing Toaster. At the end of the film, not only is Toaster fine, he doesn’t have a scratch on him. But you know what? This is bullshit, and even eight-year-olds know it. 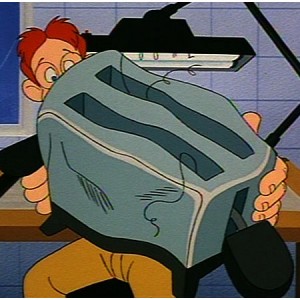 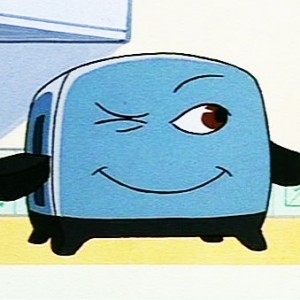 Are we to believe that after almost dying in the crusher, this teenager climbs up onto the machine to see what happened, somehow recognizes the mangled remains of the toaster his parents owned five years ago, and decides to fix it? And even if the guy was the greatest mechanical engineer of all time (Donatello? Hephaetus?) there is obviously no fixing that toaster. Toasters do not get any more broken than that toaster.

Oh, and you want some bonus darkness? The author of “The Brave Little Toaster” novella, Thomas Disch, shot himself on July 4, 2008.