“More people will come if they think we’ll have punch and pie!”

Many have colloquially known that punch and pie is an effective marketing/publicity tool to incentivize attendance at events, but its precise quantitative effect on attendance has largely been left to conjecture…until now, that is. 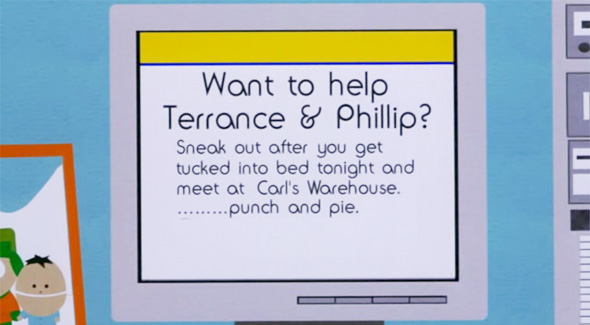 Here, we shall use the case study opportunity presented in South Park: Bigger, Longer, Uncut as a basis for extrapolating a general statistical model to demonstrate the effect of offering punch and pie as an attendance incentive.

Kyle, Kenny, Cartman, and Stan are trying to save Terrence and Phillip from execution, but they can’t do it alone. They need to “round up all the grounded kids in town” to join their cause, La Resistance.  “All the grounded kids in town,” however, is quite a large target audience, so let’s assume that what the organizers really mean is all the grounded kids at their school in their peer group (defined as plus or minus one grade level from theirs). Given an estimate of the student body of South Park Elementary at around 250 students, grades K-6, and an estimated 75% grounding rate (for seeing the Terrence & Phillip Movie), that leaves our organizers with a target audience of only about 80 kids. 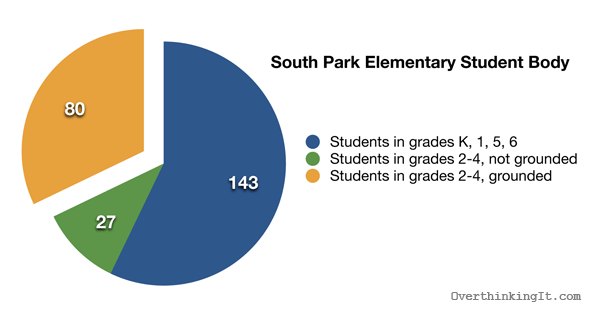 To reach this target audience, the organizers sent an “all access email” announcing their organizational meeting. Cartman famously suggests that they advertise “punch and pie” to boost attendance. 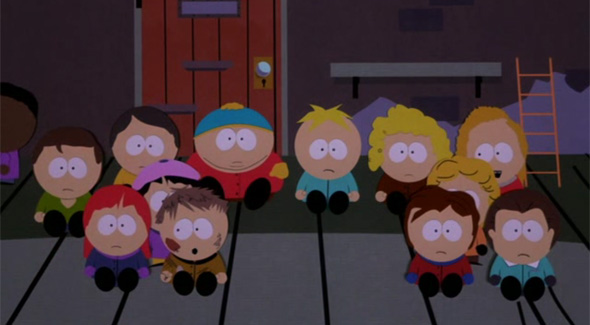 Twelve kids showed up to the meeting (in addition to the four organizers). Now we can start to answer the question at hand: what impact did the promise of punch and pie have on attendance? How many kids would have attended if punch and pie were not promised?

The actual absence of punch and pie at the meeting presents us with an interesting scenario. In this case, two kids immediately get up when they learn there are no such refreshments at the meeting. One may be tempted to conclude that the punch & pie only accounted for drawing these two freeloaders. In fact, the lack of punch and pie shows simply that among the twelve that showed up to the meeting, those two were the only ones whose interest in attending the meeting was solely based on punch and pie. The rest of the twelve (now ten) either came solely out of interest in La Resistance or out of a combined interest in La Resistance and punch & pie.

The group whose interest in La Resistance alone was enough to guarantee their attendance would not have been affected by the offer of punch and pie; they would have come regardless. This group was undoubtedly a small minority. Given the typical distribution of committed partisans among any newly formed group, Gregory and Wendy were likely the only ones who fell into this group. Which means that for the remaining eight, the promise of punch and pie was the deciding factor in their attendance.

Let us now apply this rule to determine the effect of offering punch and pie to other attendance scenarios.

More people will come if they are led to believe that punch and pie will be served.

11 Comments on “The Use of Punch and Pie as an Attendance Incentive: A Case Study”