In this Oscar Week edition of the Think Tank, the Overthinking It writers announce the first annual OTIs Awards for the year 2008. 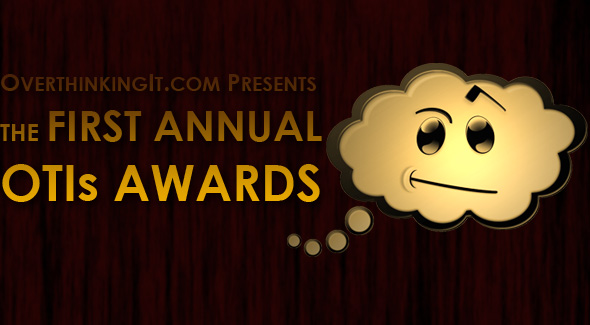 Best Minor Role in a Film:
The Cliche-Spouting SWAT Guy from The Dark Knight (Mlawski) 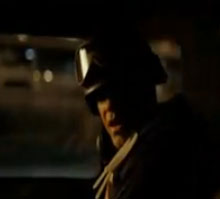 Despite being part of a franchise that was a reboot of a previous franchise based on yet another franchise, The Dark Knight managed, for the most part, to move beyond many superhero and action movie cliches.  Most of the characters went beyond archetype: Alfred WAS a British butler but also had a backstory in ‘Nam; Rachel Dawes WAS a damsel in distress but also a badass lawyer for the DA’s office; the Joker WAS a crazy terrorist but was played so subtly by Heath Ledger that he transcended the role.

At some point in the process of making the film, Chris Nolan must have said, “You know, this movie doesn’t have enough cliches in it.  I’m going to add a Cliche Spouting SWAT Guy to fix that problem!”  And, voila, he does in a six minute chase scene that might have the most cliches per minute in any movie ever.  Within those six minutes, the Cliche-Spouting SWAT says:

The interesting thing about the Cliche-Spouting SWAT Guy is that most of these lines aren’t in the original script.  That suggests that either A) Chris Nolan decided during filming that the movie wasn’t cliche enough or B) Nolan gave the SWAT guy’s actor the nod to ad-lib lines, and this is the best he could come up with.

So I salute you, Cliche-Spouting Cop.  If only you had said, “I’m too old for this shit,” this would be the best scene of all time.

The James Bond tux is a tough thing for an actor to take off. Sean Connory aside, the role of 007 turned out to be the peak for the actors that took this famous role. Daniel Craig should be worried. That being said, we should honor the best performance by an alumnus of Her Majesty’s Secret Service each year.

Sure, Pierce Brosnan’s performance in Mamma Mia was part of the film’s $144 million box office take, but I’m talking “best” performance, not “most cashing it in-est” performance. By nature of his awful vocal performance alone, Brosnan is pretty much ineligible for this OTIs award. Unfortunately, that narrows the field down quite a bit. Among the rest of the former Bonds, not a single one had a screen credit during 2008 except Roger Moore in Agent Crush:

You can hear his voice at appx. 0:36 and 1:01. Agent Crush seems like an animation-with-miniatures movie along the lines of Thunderbirds or Team America: World Police. The website gives the film a somewhat low rent feel, but it’s worth visiting to listen to the great theme song composed by David Arnold (yes, that David Arnold).

I haven’t seen this, so I can’t speak directly on Moore’s performance, but the film itself gets an 8.0 score on IMDB, which trounces Mamma Mia’s paltry 6.7. Bust most importantly, Roger Moore wins simply by not attempting to sing.

Most Facile Objectification of Another Culture:
Woody Allen for Vicky Cristina Barcelona (Stokes)

We’ve already commented in this space about how Italy and Spain are sometimes targets for orientalism. In his most recent film, Woody Allen continues this not-so-proud tradition.  The film is about two American women who take a trip to a certain city in Spain.  Ostensibly Vicky is working on a masters’ thesis about Catalan culture, and Cristina is keeping her company, but in actuality both women are looking to get their grooves back:  Vicki’s about to marry a man she doesn’t really love, and Cristina has a bad case of perpetual early-onset midlife crisis.  What form will the groove-rebackening take?  Why, passionate naked affairs with Javier Bardem and Penelope Cruz, of course, with a side dish (or perhaps a tapas?) of soft focus Spanish guitar concerts.

Bardem and Cruz do a pretty good job of bringing dignity to characters that are only a step or two above the green-skinned alien chicks that Shatner used to bang on Star Trek, but there’s no dignifying the dozen or so lingering shots of Vicky staring at a flamenco guitarist, her rational American heart slowly melting in the sunshine of his hot Latin warmth.  And these scenes are emblematic of the film’s treatment of its setting.  We never get a sense of Barcelona as anything other than a playground for expatriates, and for all that Vicky is getting a masters in Catalan culture, you would never guess from the film that people in Barcelona speak–uh, you know, Catalan.

Barcelona here is less a city than a fetish object:  the full title of the film should have been “Vicki Cristina Barcelona, three things Woody Allen would like to f___.”  Look, Allen was never going to be my go-to guy for a sensitive depiction of any culture other than wealthy-but-neurotic-Manhattanite.  Taken on its own terms, VCB is a good movie, maybe even a very good one.  Nevertheless, this OTIs award is richly deserved. 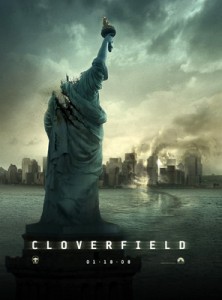 In a year dominated by its summer blockbusters, it’s hard to even remember that the best hype machine of the year belonged not to Mary Kate Olsen’s drug dealer or Robert Downey Jr’s makeup artist, but to J.J. Abrams, who proved once again that nothing sells movies quite like an irrelevant pseudo-Irish title and the events of September 11.

Seriously though, the Cloverfield hype machine was sharp – I was a cloudmaker back in the day when A.I. took immersive online movie marketing to the next level (and anybody else who played The Game, please sound off in the comments! It seems fewer and fewer people remember it these days and I need to demonstrate), and sites like http://www.slusho.jp/ and http://www.1-18-08.com/ succeeded where the A.I. game failed. They offered the promise of mystery and discovery without actually having any substantial mystery to discover.

The problem with ARGs (Alternate Reality Games) is that to make sure the savantes don’t solve them in a few minutes, you have to do two things:

1. Make them way too hard for your movie’s audience to play.

2. Withhold essential information so that they aren’t solvable until people have had time to spin their wheels a bit.

J.J. Abrams’ biggest contribution to culture is proving how to build a mystery that satisfies its purpose and audience without the tiresome burden of an answer.

With Cloverfield, there really was no mystery. It was Godzilla meets Blair Witch, pretty much straight down the middle. There was nothing about the monster that was particularly interesting, there was little to discover above the level of the occasional Easter egg, and very little about the tone set by the hype was particularly important to the function of the movie. The movie was pretty comfortable offering limited information, and there wasn’t much you needed to know to watch it.

But the hype gave the prospective audience just enough to imagine a host of far more expensive and exciting movies – a Cthulhu movie, a Voltron movie – and the final Cloverfield movie benefited from residual affection for all those superior but probably unworkable concepts. And then they topped it all off by not giving the movie an actual name.

For selling a movie by obscuring the steak and selling only the sizzle, Cloverfield definitely deserves the Otis for Best Hype of 2008.

(And yeah, most of the hype was in 2007 – but straddling the New Year is standard fare for a prestige picture)

[Belinkie takes a slightly different approach and suggests two awards that the academy should give out. In the meantime, since we pick and choose our own OTIs winners, let us know who you’d give these last two awards to in the comments. -Ed]

The Nuking the Fridge Award for Sequel Disappointment 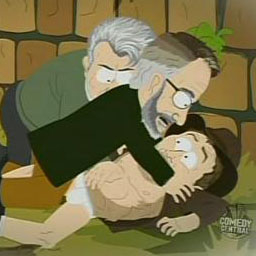 Yes, I know Dr. Jones’ latest adventure is a very dead horse, and my dislike of it is very very well documented. But perhaps some good can come out of it, if we create an Oscar named after its most infamous silliness, to “reward” the year’s lamest sequel. Actually, maybe this shouldn’t be given out every year. It should be reserved for cases where Hollywood takes a beloved movie, gets our hopes up, and then produces a totally shrug-worthy phoned-in excuse to take our money. Think Terminator 3, Die Hard 4, The Godfather 3, the Matrix sequels, and of course, Star Wars: Episode I (the award could easily be called the Jar-Jar Award.) Let us all cross our fingers and toes that Guillermo Del Toro’s Hobbit movie doesn’t qualify for this.

But I’ve got a more serious suggestion:

The Golden Globes have a category for “Best Picture, Musical or Comedy,” but I don’t like lumping those two genres together. At the 2007 Golden Globes, for instance, Sweeney Todd beat Juno. This is not only weird, it’s an insult to both Musicals and Comedies. I say, if animated films deserve their own category, so do comedies. No comedy has won Best Picture at the Oscars since Annie Hall. This means that at least half the classics Hollywood has ever produced haven’t had a realistic shot at a statuette.

Wouldn’t it be great if films like Ghostbusters, South Park, and The 40 Year Old Virgin had been recognized for their hilarity? There are some who might argue that The 40 Year Old Virgin isn’t a great work of art. But doesn’t being the very funniest two hours of the year count for something? To borrow a line from Sullivan’s Travels (the best comedy of 1941, in my opinion): “There’s a lot to be said for making people laugh. Did you know that that’s all some people have? It isn’t much, but it’s better than nothing in this cockeyed caravan.”