SOLUTION: THE EELS ARE RUNNING THE SHOW 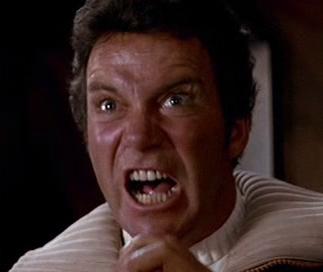 As we know, fifteen years earlier, in the episode “Space Seed,” Kirk dropped Khan and the survivors of Botany Bay on the fertile but dangerous planet Ceti Alpha V. The explosion of Ceti Alpha VI six months later knocks the planet out of orbit, causing dust storms that wipe out nearly all organic life.

However, just as the Enterprise awoke a long-dormant conqueror when they found the Botany Bay, so too does this explosion awaken the hibernating masters of Ceti Alpha V: the Ceti eels.

A superintelligent hivemind, the Ceti eels comprise a single brain, of which each individual eel is the equivalent of a cell. The Eel-mind went into a torpor when some catastrophe scattered them, turning them from a single supergenius mass into a bunch of mindless worms. However, the eels do have one evolved advantage: an eel that can merge with the cortex of an intelligent creature can boost its “transmission range.” This enables the Eel-mind to slowly begin rebuilding itself through parasitism and subterfuge.

The eels don’t make their victims vulnerable to suggestion. They plant suggestions themselves.

By luck, an eel sneaks into the ear of Marla McGivers, the Starfleet lieutenant who fell in love with Khan and followed him into exile. She’s no slouch, but she doesn’t have the eugenic hypersenses of the rest of the Botany Bay crew, so the eel’s able to creep up on her while she sleeps. Now she’s acting as a transmitter, waking up any nearby eels into a semblance of the original Eel-mind. The Eel-mind’s not up to full strength yet, so it tells her to sneak eels into more crewmembers.

The enhanced cortical capacity of these genetic superhumans restores the Eel-mind to awareness much faster than normal. Sadly, it takes some delicate balancing to keep an eel from consuming its host. Lt. McGivers, as well as some other crew members, are victims of this early experimentation. However, once they gain control of Khan the battle is won.

The eels cannot run a man like a puppet, but they can plant suggestions he will find reasonable. Khan sincerely believes that the eels make people more suggestible–because that’s what the eels want Khan, a man who seeks power over others, to think. In truth, this is simply the easiest suggestion that will get Khan to put eels in as many ears as possible.

Fifteen years later, the Eel-mind senses the Reliant in orbit over Ceti Alpha V. It suggests that Khan hack the Starfleet database uplink using Botany Bay’s communications gear, erasing all reference to his presence in the system. Chekov and Terrell are lured down, get a lecture from Khan, and end up with some eels in the brain.

Now, for the first time in its life, the Eel-mind is larger than the planet on which it was born. Khan, free of his prison and with the resources of a starship at his disposal, considers flight to a distant planet and a slow re-arming process. But the Eel-mind suggests that revenge on Kirk would be much sweeter. Even though Kirk was nothing but kind to him fifteen years ago – he didn’t have to let Khan live, after all – Khan follow’s his master’s suggestion.

Khan might want to be free, but the Eel-mind wants more starships.

Unfortunately for the aliens, and fortunately for the Federation, the only two eels that get anywhere near the crew of the Enterprise get killed or blown out of their rider’s heads. Kirk and Khan never actually get into the same room at the same time. The Reliant is blown out of the Mutara Nebula, and with it every eel “wired” to a transmitting cortex. In one terrible second, the Eel-mind’s consciousness is again wiped out.

But nobody knows exactly what the Ceti eels are capable of. McCoy doesn’t recognize the eel when he blasts it out of Chekov’s ear. Even if Chekov remembers what Khan told him, that’s pure misinformation.

So for now, and for milennia to come, the Eel-mind sleeps. And waits.