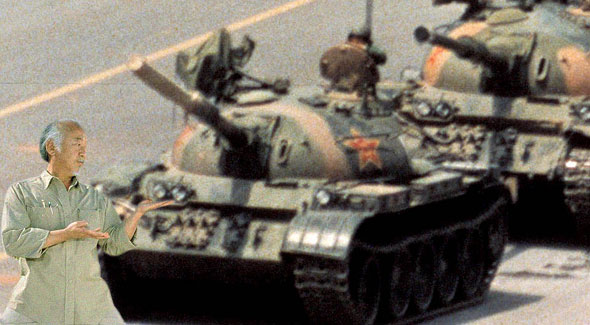 Word comes today (via Defamer) that the coming remake of The Karate Kid set to star Will Smith’s son Jaden will be less a remake and more–um–a fucking travesty.

It seems that due to the financial participation of the China Film Group, the film’s location will be moved from the San Fernando Valley to China, where a Chinese mentor will instruct young Jaden in the ways of a martial art other than karate. Will Smith is at pains to explain that this is in fact a good thing:

“Fortunately, karate is originally a Chinese art form, so that’s the area we’re playing around in.” (Ed. Note: Though karate was developed in Japan, it is based upon Kenpō, a Chinese fighting style.)

I’m not sure I’m willing to grant that adverb… “Fortunately” implies that we should somehow be glad that the source material needed slightly less lube before violation (or, rather, “playing around”). As if she deserves it for dressing in such a skimpy gi.

We’ve had some spirited debate on the site this week about the racial implications of a character like Mr. Miyagi who, for better or worse, became a kind of pop-culture mascot for American perception of its rising Asian population. Kidding aside, I can’t help but think that taking such a monumental change (can they even call it The Karate Kid anymore?) so lightly conceals the insidious racism that minimizes real differences in customs, history, and culture among Asian peoples because, after all, they all have slanty eyes.

In other words: “Those martial arts all look the same to me.”

10 Comments on “Karate Kid Remake Will Be Refreshingly Karate-Free”