I’m a lucky guy.  Recently I had the unique opportunity to see The Godfather…on the big screen.  In conjunction with a new, super restored DVD release of the Godfather trilogy, Coppola also had new 35 mm prints issued, and they (well, Parts I and II) were screened at New York’s Film Forum.  Awesome.  I was totally stoked…but not quite prepared for what would ensue during the screening. 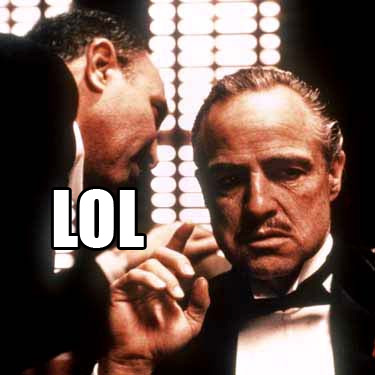 WARNING: Spoilers (and unintended comedic reactions) after the jump.

The lights went down.  A solo trumpet mournfully accompanied the undertaker Amerigo Bonasera’s plea to the Godfather for mafia-style justice.  My heart was pounding.  I was in awe of the cinematic greatness that would ensue.

But at the conclusion of the long zoom-out shot, the camera cuts to the shot of Don Corleone making that face-touching gesture.  And what happens?

Not uproariously laughing, mind you, but definitely chuckling.  Then more laughter as the cat squirms in the Don’s lap. Granted, there is something slightly comic about all of this, but remember, this is a taut and dramatic scene.  This exposition is offering key insight into Don Corleone’s character: the respect he commands and the violence he controls.

But the audience (myself included) is laughing.

And this happens in several other non-comic parts of the movie:

And other scenes as well.

This is the effect of an audience watching a classic movie they know and love in a communal setting.  Laughing at the gestures and hints of things to come is a way to show everyone around you that you so know this movie because you’ve seen it, like 20 times, and know all the reasons why the little things add up to make this movie so great.  Everyone knows that you wouldn’t laugh at these scenes if this were 1972 and you were watching this for the first time, but pretty much everyone in the theater had seen this movie at least once and has lived an entire life with this movie imprinted into the fabric of their American cultural knowledge base.  The laughter, therefore, is less an expression of humor and more an expression of satisfaction that this part of our cultural knowledge base is in fact cut from the finest cloth.  Everyone shares in this moment, and everyone laughs, because there’s not really any other way to express it.

Of course, there wasn’t any laughter in some of the more dramatic and intense scenes.  If someone had guffawed, or even chuckled, during the climactic baptism/assassination scene,* he/she would have gotten some dirty looks. After all, as Bonasera learned, you must show your respect for the Don.

Readers, some questions for you:

*This, not surprisingly, was incredibly powerful to see on the big screen, but one of the things that really did it for me was the way the theater sound system really brought out the low notes from the organ music.  Awesome.

12 Comments on “Unintended Comedy in The Godfather”