THERE ARE HUGE THE DARK KNIGHT SPOILERS IN THIS POST. BE WARNED!

I WILL ALSO PUT A RANDOM STEVEN SEAGAL MOVIE SPOILER AT THE END OF THIS POST. GET EXCITED! 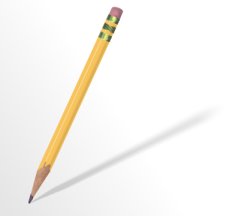 you, or maybe, like me, you’d heard a little bit about it, but when it actually happened, it still surprised you, and you still cringed, and maybe you still cried out a bit, but you’d rather not draw attention to that, so you won’t mention it except in your blog.

Because, sure, Christopher Nolan’s latest Batman film is a dark and compelling exploration of the moral hazards of political necessity. It’s a brave reinvention of the superhero genre. It’s a Boffo Box-office Breaking Batnanza (as Variety might put it if they felt feisty).

But mostly, it’s two-and-a-half hour framing device for a really disturbing scene with a pencil.

You know it’s true. Find out what makes the Joker’s pencil so magical after the jump — 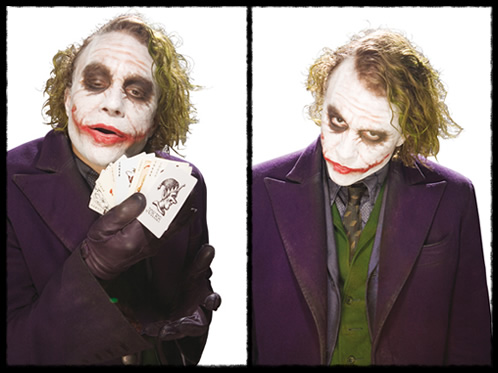 “You want to see a magic trick?”

On its face, the scene is pretty simple. A clown-faced crook named the Joker shows up at a secret meeting of the city’s top criminal bosses — he’s small-time, not on anyone’s radar, and he hasn’t got an invitation.

The bosses try to threaten him, kill, him, or scare him off. But he intimidates them into letting him stay — by slamming one of his attackers’ heads into a table, driving an upturned pencil through the thug’s eye socket and deep into his brain, instantly killing him.

The move is smooth, fluid, and by far the most brutal, merciless act of the summer movie season, short of the release of Space Chimps.

The moment is entirely effective — it’s the most remembered and talked about moment in movies since Indiana Jones climbed in a refrigerator (except in a good way).

But like most truly remarkable movie moments, there’s a lot going on here than meets the eye.

Piercing through the layers

The Joker’s magical pencil moment is similar to the gender-bending that takes place in Shakespeare’s Twelfth Night — it subverts with audience suspension of disbelief itself and deliberately confuses illusion and reality, therefore crafting a “truer” experience than might result from stacking things in a less confusing way. 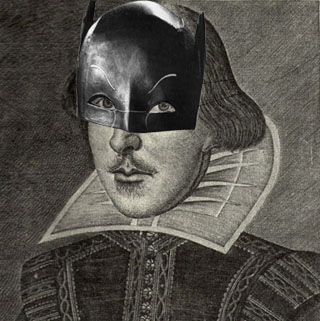 In Shakespeare’s plays, famously, the parts of women were almost always played either by boys or by Gwyneth Paltrow. Okay, this is confusing enough — by boys.

In Twelfth Night, a girl, being played by a boy, has to disguise herself as a boy in order to survive when shipwrecked alone. The disguised girl then falls in love with a local prince, but can’t do anything about it, because she’s been pretending to be a boy the whole time and doesn’t want to break cover.

At one point, the girl reveals herself to be a girl, and love happens, yadda yadda yadda.

The point is, when the actor reveals himself as a girl by constructing and blowing up a second level of reality, he’s reiterating and reinforcing his initial illusion — when the guy looked like a boy, what the audience saw onstage lined up with their expectations, because he actually was a boy.

But when the guy looked like a girl, he was actually moving farther away from reality — but the audience perceives it as moving closer, because the moment is a big reveal, of a collapsing illusion. You’re stretching and snapping back the audience’s suspension of disbelief so it fits even better than before, sort of like breaking in a pair of shoes.

You’re also hinting that the audience’s perceptions of the real world might be skewed by their presuppositions about what is possible. 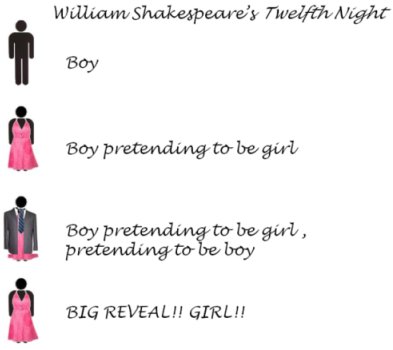 The Falstaff of Felony! The Rosencrantz of Robbery! The Gildenstern of Grand Theft!

In Hollywood movies, special effects artists use camera tricks, computer-generated graphics, animation, fight choreography, wire stunts, squibs, pyrotechnics and all manner of other illusions to depict violent acts realistically (or should I say “representationally”) while committing no acts of violence themselves. The audience knows nobody is really being hurt — not even animals, as we are dutifully informed at the end of every movie — but we watch the illusion and suspend our disbelief.

In The Dark Knight, the Joker, who is very violent — we saw (an illusion of) him gun(ning) down his own accomplice in the very first scene — approaches Gotham’s chief gangsters with a harmless proposition. He will show them a magic trick. He’ll make the pencil disappear. Heath Ledger reads the line pretty straight. It sets up a surprise.

And then that suspended moment crashes down and gets a pencil through the eye socket.

The big reveal — the Joker is not just violent, but tremendously violent — moves away from reality. The stunt itself is just a magic trick for the filmmakers, but it feels more grotesquely authentic than if the Joker had just walked in and stabbed someone in the eye.

And we don’t even see the wound. It’s bloodless. The pencil just vanishes. The body drops out of frame. The mind does the rest of the work to make it seem real. Quite an illusion.

Nolan and Ledger have expanded and contracted the suspension of disbelief. They’ve come back to the baseline Batman movie, with its imagined crimes and crimefighters, and firmly hooked the audience and made the imagined brutality all the more brutal.

On top of that, they’ve called the audience’s reliance on their presuppositions of what level of violence is real in their own lives into question — and that goes on to be a major theme for the rest of the film, up to and including the wisdom and compassion of Debo. 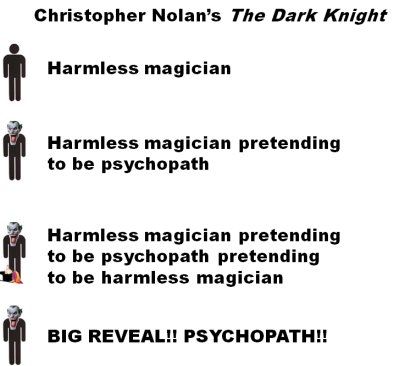 Can you think of other examples of this sort of phenomenon in movies, plays or books? Can we come up with a term for it? Does a term already exist? Were you totally disturbed by the pencil scene? Sound off in the comments!

Oh, and the character played by DMX in Exit Wounds may look like a thug and drug dealer, but he’s secretly a genius computer hacker.

You can thank me for that later.

31 Comments on “The Joker’s Magic Pencil”