Pan’s Labyrinth, the gorgeous film by Guillermo del Toro, was on TV again the other day, and just seeing certain scenes brought all the feelings I had upon my first viewing flooding back.  I should say at the outset that it is easily one of the best fantasy films in recent memory.  Nevertheless, I left the theater with a niggling discomfort.  Where the discomfort came from I didn’t know.  Until now.

Big old spoilers after the jump.

First, some literary theory.  Probably you’ve already heard of Joseph Campbell’s monomyth from his Hero With a Thousand Faces.  It’s also called the heroic quest, although I prefer to call it the boy’s quest to distinguish it from the girl’s quest, which is markedly different.  Part of the problem with Pan’s Labyrinth – and I’ll get back to that below – is that the story, for the most part, is a girl’s quest, but it ends in a boy quest way.

Here’s the general progression of the boy’s quest, as a review:

-Boy lives in happy childhood land
-Boy is called to the quest, refuses it, then is forced to accept it
-Boy is guided into the world of the quest – a fantastic wilderness world filled with magical creatures and scary people – by a helpful guide figure
-Boy gathers companions to help him with the quest
-Boy fights “the dragon” (the Bad Guy)
-Boy reunites with his father
-Boy is recognized as a hero (a Man), gets the girl, often becomes king, is in full possession of his powers, lives happily ever after as the Master of Two Worlds (the public “real world” and the fantasy/quest world)

It’s the plot of Star Wars and about a billion other stories.  The main idea is that a boy becomes a man by entering a wondrous but somewhat threatening world, mastering its rules, and killing a bunch of things in it.  His reward is kingship and a girl.

Pan’s Labyrinth, on the other hand, is mostly a typical girl’s quest, which goes like this:

-Girl lives in grey, unhappy/ambiguous childhood land
-Girl is called to quest, refuses it, is forced to accept it
-Girl is guided into the world of the quest – usually a world that is an uncanny version of her home life or a threatening wonderland that has no discernable rules – by a guide who is a phony or a trickster
-Girl sometimes, but not always, gathers companions.  Often one of them will be an evil seducer figure.
-Girl fights “the dragon”
-Girl reunites with father (or mother) figure, finds him to be another phony
-Girl returns home, having learned a lesson about herself and her own powers

In short: the girl becomes a woman by entering a scary world, realizing the rules of that world are false, and returning home.  It’s the plot of Alice in Wonderland, The Wizard of Oz, Labyrinth, and a bunch of other fantasy stories that star female protagonists. -She is called to the quest by the Faun, an ambiguous trickster figure

-The Faun guides her into the labyrinth, which is both a scary fantasy world and, importantly, part of her home

-The girl succeeds in her first task but is seduced by the Pale Man (although, interestingly, he seduces her with food, not sex—but it’s the same thing in literature, right?)

-Ofelia fights her step-father (the Dragon), who is another phony, and steals her baby brother from him

So far, it’s basically the girl’s quest.  Here’s where it shifts…

-Ofelia returns “home” to the Underworld, recognized as a hero, where she takes her rightful place as Princess Moanna

So what we have here is a girl’s quest that ends like a boy’s quest.  Rather than return to a private, domestic space where she can get married and have babies, she is revealed to be a princess.  By passing the test in the film, she has proven her worth and can lead her people in the Underworld. 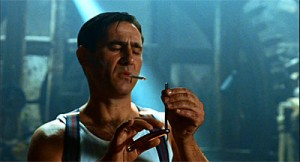 So here’s my problem:

The movie is about the Spanish Civil War!

That is to say, the Good Guys are Republicans and the Bad Guys are authoritarians.  So I have a problem that Ofelia’s reward is becoming an authoritarian (a princess) – and those monarchs are supposed to be Good Guys.

Del Toro’s downfall was replacing the girl quest ending with boy quest ending.  The boy quest ending isinherently authoritarian.  The boy hero gains mastery over the two worlds, thus proving he will be able to dominate them as a (hopefully enlightened) king.  Although born under strange circumstances (often as an orphan or a bastard or a pig farmer or something), he shows his noble blood through the completion of his tasks and takes his “rightful place” on the throne.

How antithetical to republican values can you get?  Thus, by using this standard ending, del Toro completely undermined his own themes.

Anyone else have this problem, or am I the only one?  To read the reviews of the film, you’d think almost everyone else in the world disagrees with me.  Here’s an article from Wired, which claims that the moral of the story is that fantasies save us from fascism, because they allow us escape.  Ofelia can rebel against her step-father because she can imagine another world in which he is not in charge.  She flees to the forest (a place of fantasy) and there meets up with the rebels who help her defeat her step-dad.  In this reading, her death is a liberation from her terrible life to a wonderful land of fantasy.  Roger Ebert likewise claims the movie is anti-fascist because Ofelia rebels against the authority of the Faun by refusing to harm her brother.  Most of the other reviews go like this: “Blah blah blah… the power of imagination.” All of these arguments are great, but they ignore the final scene.  In my reading, Ofelia’s death is a liberation from Spanish fascism, but it’s only a liberation to the benevolent fascism of the Underworld.  The somewhat happy ending of the parallel “real world” plot, in which the resistance fighters kill Captain Vidal, is still horrifying, because its final image is of a woman sobbing over the body of a dead little girl.  The film seems to acknowledge that imagination can’t obscure the fact that, in real life, the fascists won the war.  The power of the imagination didn’t beat the power of the gun.

A.O. Scott of the NY Times has an interesting reading of the film that is more ambiguous than the ones I referenced above.  Here’s the beginning of his review:

The reviews above, and most of the ones I’ve read, lean toward the former; my reading leans towards the latter.  Perhaps A.O. Scott is right in saying that the amazing thing about the film is that it allows both readings, balancing the two worlds just so to highlight the tension between the two.  Or, it would if del Toro didn’t say afterwards that Ofelia really DID go to the Underworld and that last image wasn’t just a dying girl’s incoherent thoughts, thus ruining the wonderful equivocation.  Oh well.

Anyway, what do you think?  Did you read the film as a fairytale in which good was triumphant and evil was destroyed by the Power of Imagination?  Or did you read it my way, as a good film that undermined its own themes by adhering to a fairytale structure that is inherently authoritarian?  Or did you read it like A.O. Scott, as a film that was aware of and highlighted its own inconsistencies to point out the ambiguity of both fairytales and the Spanish Civil War?  Or something else?