There is no TV with enough pixels to rival the experience of watching a great movie in an actual movie theater. Sorry Samsung, it’s true.  I first figured this out when Fenzel and I went to see Superman at a midnight showing years ago. I grew up with that movie, and knew it backwards and forwards… but I’d only ever seen it on VHS. Sitting in a real movie theater, hearing the John Williams score, and seeing that “S” logo ten feet tall completely floored me.

Anyway, last week, I got the chance to see It’s a Wonderful Life projected from a real print. It was scratched as hell and barely audible at times, and I still cried like a baby for at least a third of it. And I also managed to notice a few things to Overthink™.

1. The movie really goes out of its way to emphasize the book Clarence the Guardian Angel is reading. Here’s part of the opening scene, taken from a transcript:

CLARENCE: I mean, uh, might I perhaps win my wings? I’ve been waiting for over two hundred years now, sir, and people are beginning to talk.

HEAD ANGEL: What’s that book you’ve got there?

HEAD ANGEL: Clarence, you do a good job with George Bailey and you’ll get your wings.

Am I the only one who thinks that seems kind of shoehorned in there?

(SIDE NOTE: This seems like kind of a grim view of Heaven. Poor Clarence spends centuries of chasing after the brass ring, while enduring the gossip of other angels.)

(SIDE NOTE 2: It’s never explained exactly why Clarence hasn’t been able to get his wings – presumably, he hasn’t been a very successful angel. Please please, somebody write some fan fiction about all the people he failed to convince not to kill themselves.)

Sawyer comes back shortly after Clarence enters the movie in corporeal form. He and George are warming themselves by a fire after their dunk in the river, and Clarence says:

Oh, Tom Sawyer‘s drying out, too. You should read the new book Mark Twain’s writing now.

And then Sawyer gets a starring role at the very end, when George finds Clarence’s copy on top of his massive pile of money. 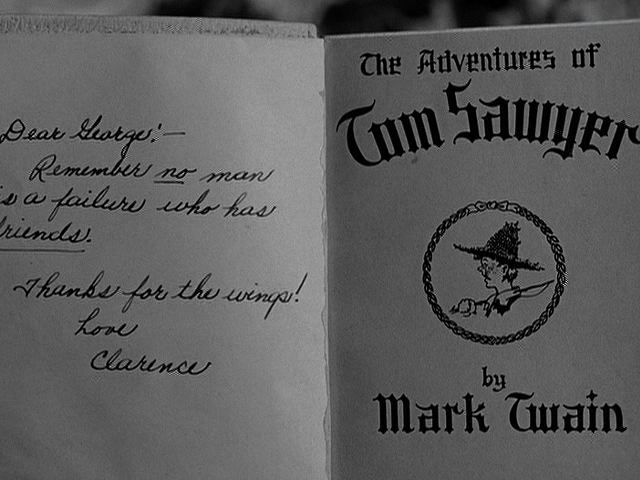 (SIDE NOTE 3: Clarence follows his salutation with a colon and a dash. Maybe that’s grammatically correct in Heaven, but here on Earth it’s a bit tacky.)

Anyway, it’s clear the filmmakers want us to notice Tom Sawyer. Why? I mulled over it for a while, and I’m pretty sure it’s because of three chapters about halfway into the novel.

Tom, Huck, and the significantly less popular Joe Harper run away from home to live on a nearby island. After a couple days, they see the townspeople dredging the river, and realize everyone must think they’re dead. Tom sneaks back home that night, and listens to his Aunt Polly crying her eyes out over him. Later, the three boys hide out in the church and hear their own eulogy.

It’s a Wonderful Life was definitely not directly inspired by Tom Sawyer. It was an adaptation of a 1943 short story called “The Greatest Gift,” which you can read here. But I think the screenwriters mean to suggest that Clarence the Angel gets the idea of showing George the world without him from his current reading material. Plus, the final scene of George beaming as the whole community joins in song is reminiscent of Sawyer’s return:

Suddenly the minister shouted at the top of his voice: “Praise God from whom all blessings flow — SING! — and put your hearts in it!”

And they did. Old Hundred swelled up with a triumphant burst, and while it shook the rafters Tom Sawyer the Pirate looked around upon the envying juveniles about him and confessed in his heart that this was the proudest moment of his life.

Still, this is a pretty obscure allusion, and I’m not convinced it’s intentional. I wouldn’t be surprised if Clarence was only reading Tom Sawyer to establish his simple, childlike character. Moving on…

2. When George sees what life would be like without him, we understand the reason behind a lot of what’s different. His old employer at the pharmacy went to jail for poisoning a kid, because George wasn’t around to prevent it. His little brother died young, because George wasn’t there to pull him out of the freezing water. But here’s something curious – it’s snowing lightly in the real Bedford Falls. But in bizarro Bedford Falls, it’s not.

You can see this during George’s climactic prayer, when the snow resumes abruptly the instant he gets his wish.

George’s absence somehow changed the weather. And actually, I don’t find this far-fetched. George not being born alters the lives of thousands of people, and those changes effect thousands more. And given how complex and finicky the weather is, a snowstorm being altered seems entirely plausible.

Nevertheless, I got to thinking about what, specifically, could have had this effect. My best guess is it’s Sam Wainwright’s plastics factory. You probably don’t remember that, since it sort of flies by in the middle of a cute courtship scene. George is over at Mary’s house when she gets a call from his old frenemy, who wants to open a factory in Rochester. George, never missing an opportunity to help out the town, has a better idea:

Why not right here? You remember that old tool and machinery works? Well, you tell your father he can get that for a song. And all the labor he wants, too. Half the town was thrown out of work when they closed down.

So basically, George single-handedly gets a factory built in town… which proceeds to spew pollution for the next ten years. In bizarro Bedford Falls, the factory doesn’t get built. The residents presumably continue to live in extreme poverty, but the air is cleaner. See what I’m getting at here? A few thousands tons of CFC’s released into the atmosphere could definitely screw with a few clouds, right?

3. After George’s father dies, Potter tries to shut down the Building and Loan. Watching the movie from the vantage point of 2008, his argument seemed uncomfortably timely: 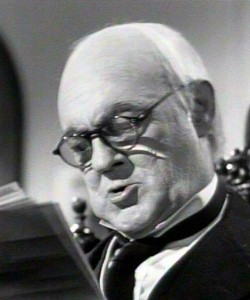 Someone put this man in charge of the Fed.

POTTER: Ideals without common sense can ruin this town. Now, you take this loan here to Ernie Bishop… you know, that fellow that sits around all day on his brains in his taxi, you know. I happen to know the bank turned down this loan, but he comes here and we’re building him a house worth five thousand dollars. Why?

GEORGE: Well, I handled that, Mr. Potter. You have all the papers there. His salary, insurance. I can personally vouch for his character.

POTTER: A friend of yours.

POTTER: You see, if you shoot pool with some employee here, you can come and borrow money. What does that get us? A discontented, lazy rabble instead of a thrifty working class. And all because a few starry-eyed dreamers like Peter Bailey stir them up and fill their heads with a lot of impossible ideas.

So basically, George is offering loans to people who are moderately risky, because he wants them to have homes.

Add President Clinton to the long list of people who deserve a share of the blame for the housing bubble and bust. A recently re-exposed document shows that his administration went to ridiculous lengths to increase the national homeownership rate. It promoted paper-thin downpayments and pushed for ways to get lenders to give mortgage loans to first-time buyers with shaky financing and incomes. It’s clear now that the erosion of lending standards pushed prices up by increasing demand, and later led to waves of defaults by people who never should have bought a home in the first place.

Look, I don’t want to get into a political firefight on this site. But remember that Potter doesn’t refuse loans because he likes to make people suffer (I think). He refuses loans because those people are bad credit risks.

18 Comments on “It’s Some Wonderful Nitpicking”