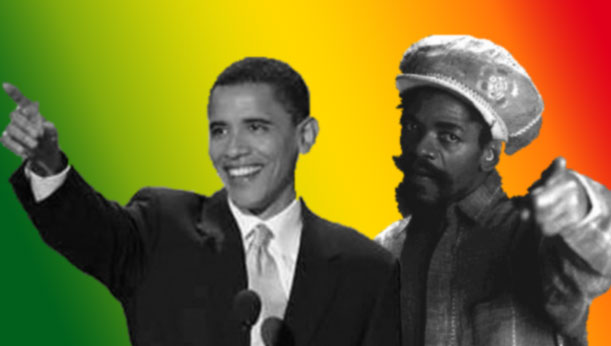 Last week, I was sitting in a bar in the village of Ngare Ndare in northern Kenya, nursing a Krest Bitter Lemon, and listening to the radio. The radio was tuned to Metro FM, “Kenya’s House of Reggae.” Amidst the chain of nondescript contemporary reggae hits, the refrain of one song in particular caught my attention: “Barack Obama, Barack Obama, Barack Obama, woi wooooi” As soon as I got back to my computer, I learned that the song is by Jamaican reggae artist Cocoa Tea, whose substantial back catalogue is only probably familiar to reggae and dancehall enthusiasts. Despite Cocoa Tea’s relative obscurity in the US, the song is already becoming massively popular in Kenya, even though it was only released sometime last week. (MP3 after the jump.) The song’s popularity is easy to understand: Cocoa Tea’s song stands apart from previous musical tributes to Obama. It actually works well as a song, rather than a celebrity clusterfuck or a one-note gag. The song has strong replay value largely because of the catchy chorus, in which Cocoa Tea effortlessly syncopates the candidate’s name again and again. While not being terribly deep from a lyrical standpoint, the song does manage to include an analysis of electoral politics, race relations, and the interaction between politics and popular culture in just under four and a half minutes.

Beyond these musical and lyrical considerations, the song works because of the fit between Obama and reggae music. I’m not saying this just because of Obama’s public acknowledgment that he used to smoke the ganja. Rather, as Robert Farris Thompson would remind us, reggae is one piece of the broader Afro-Caribbean-American musical tradition that embraces musical and dance forms as diverse as Mambo, Capoeira, and Breakdancing.

A key component of many of these forms is an attempt to create a cultural, spiritual, or aesthetic link with the African homeland, while simultaneously effecting social change in the new world. Given this broader framework of Afro-Caribbean arts, Cocoa-T’s song is less an endorsement and more a musical representation of just what Obama’s candidacy means in the context of the African diaspora.

Although I’m sure there will be other attempts (especially if Obama ends up winning the nomination), I doubt any other song will capture the spirit of his campaign as naturally—which raises another question: What genre would best typify Hillary Clinton? What about John McCain? I challenge all of our readers to leave their suggestions (either hypothetical or actually recorded) in the comments.