In the 1990 Dolph Lungren movie I Come in Peace (a.k.a. Dark Angel), a mysterious alien with a platinum blonde mullet happens upon a high-stakes drug deal gone bad. He says, “I come in peace.”

In “Vaulting Ambitions,” the most recent episode of Star Trek: Discovery, Michelle Yeoh with a Goatee (a.k.a. Terran Emperor Georgiou), hears that Michael Burnham is from an alternate universe. She pledges to help Michael return in exchange for the engine schematics for the Discovery’s spore drive. She says that, like Captain Georgiou of the Federation, she must be “a woman of honor.” 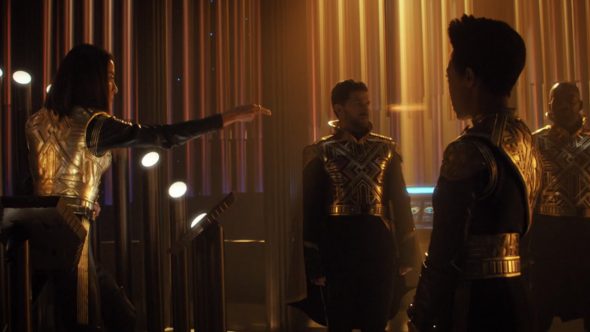 These scenes have two things in common:

Well, Georgious doesn’t kill everybody (The Blood Mop Guy becomes governor of Andor! Bet he’ll clean that place up!), but in the Mirror Universe, real and unreal mean the same thing, and shit just got it.

Bottom line: it’s showtime on DISCO. We know who all the main characters are, finally, which means everybody can do in-character things onscreen.

“Vaulting Ambitions” may not be “action-packed,” but it’s “packed with actions.” It also clocked in as the shortest episode of any live-action Star Trek series to date, at a slim 37 minutes. A brisk enough experience that I put away my notebook in the second half and just watched. 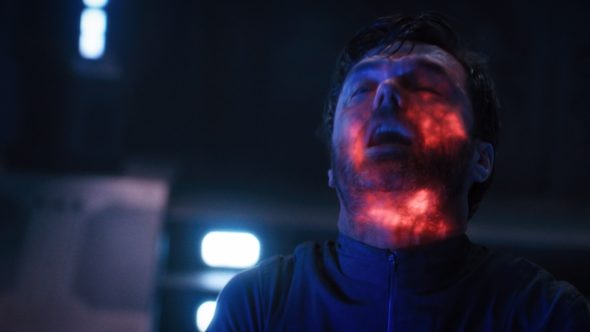 “The Patriots are in the Super Bowl AGAIN??”

Though when your notes say:

they can be just as much a joy on their own as they are useful.

Keep track of the vision in my eyes

We did get some pretty good substance with the style, though. While she wasn’t murdering her entourage this week, Emperor Georgiou explained the metaphysical principle defining the Mirror Universe in Discovery: humans in the Mirror Universe can’t see light. That is, they are sensitive to “normal” brightness to the point of it causing them pain.

But it’s not just eyeballs that abide by the principle. While space in the regular universe is bathed in starlight, in the Mirror Universe it is moody and nebulous. And it’s a symmetrical principle, an ontological dualism around the relative openness to light and darkness, rather than just a uniform shift into shadow.

Classic Star Trek Mirror Universe episodes lean hard on “Evil Twins.” The Starfleet characters confront campy evil “opposite” versions of themselves, and in doing so, reaffirm who they really are. Discovery seems to be playing more with a “Mirror Ambience.” By shifting the light, the Starfleet characters come to see themselves differently, challenging where they stand in the balance of light and dark. 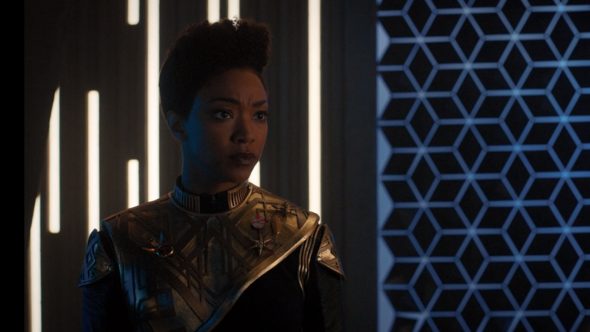 Crossing the threshold from one universe to the other doesn’t increase the rigidity of who people are, it threatens to change them. It’s not just that there’s a Captain Lorca and a Leather-Jacket Lorca — there’s a Lorca who changes clothes depending on what universe he’s in. There’s not just “Tilly” here and “Killy” there — now Tilly wears her long blonde wig in every scene.

When we learn in this episode that Emperor Georgiou, not Sarek, was Michael Burnham’s adoptive mother in the Mirror Universe, it’s not so much a reversal to how things were as the change from a 20/80 arrangement to an 80/20 one.

In the Mirror Universe, it’s Georgiou who raises Michael, and Sarek who sees the potential in her and gives her authority and legitimacy. In the regular universe, it’s just the other way around. It’s all modes of parenting. 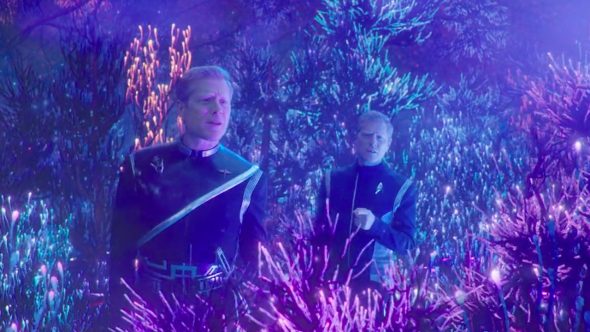 Well, Stamets and the other guy “stuck outside himself” — Ash/Voq.

Don’t switch the blade on the guy in shades

In the Mirror Universe, while the humans are darker, the Klingons are lighter. Voq, the Albino Klingon (he of the symbolic light skin) is the living steward and embodiment of the fire of Kahless. He’s the “light” of the potential unity of the Klingon Empire. And yet, looking at his story to this point, his inability to “see light” seems more limited in the regular universe than the Mirror one.

In the regular universe, Voq is “the Torchbearer” a solitary light in a place of darkness: the Klingon Ship of the Dead, caked in magnetized coffins. In the Mirror Universe, Voq is “the Fire Wolf,” not a lone light but a pack leader, on a bright and sunny world surrounded by friends and “listening posts.” 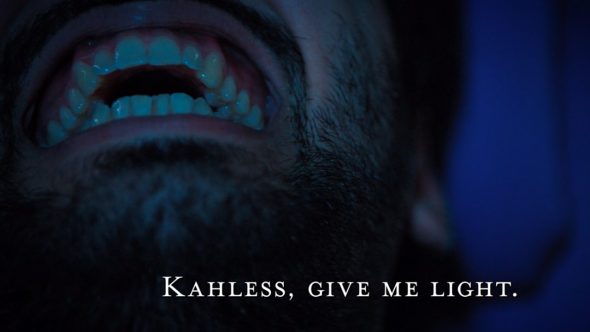 And in each universe, Michael sets a blaze around Voq. In the Mirror Universe, Voq burns with sacrifice for the people he cares for and is responsible for. In the regular universe, he burns with hatred and destruction for his enemies.

The season continues to build a meta-narrative of ontological dualism around Michael and Voq, which has spiraled out into a dozen pairs of opposites in tension between cooperation and mutual destruction: logic and emotion, unity and war, duty and mutiny, human and Klingon, born self and created self, parent and child, lover and victim, independence and togetherness. Yes, even their dark and light skins build on the theme. 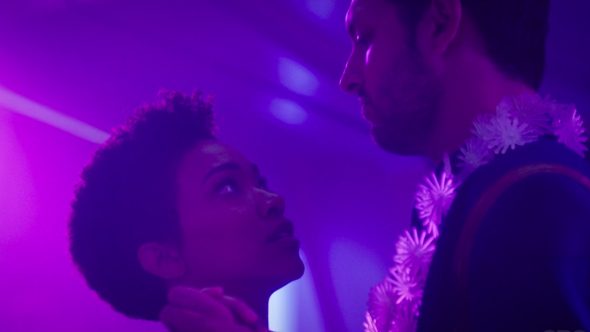 Note the allusion to the mycelial network around his neck in the purple light.

We know this war and peace will balance on a knife in The Original Series and the peace will endure and strengthen, even as it faces new risks, into The Undiscovered Country and The Next Generation. It’s not a war about beginning, violence and conclusion, but about Yin and Yang. The Federation and the Klingon Empire are in eternal opposition to each other. Each can recognize bit of themselves in the other, but also a whole lot of the other way.

All this reaches some manner of consummation for Voq in “Vaulting Ambitions.” L’Rell performs finger-laser-knife brain surgery on Ash/Voq, which culminates in her howling upward in a clear example of the well-established Klingon death ritual. The specific consequences of it for Ash/Voq remain to be seen.

Of course, Klingon religious scholars would tell you that the death ritual is not about the ending of a Klingon warrior, but about their approach to Sto-vo-kor, the Klingon Valhalla, an afterlife of eternal battle. It’s a new beginning.

The meaning of the howl of the death ritual is “Beware, a Klingon warrior is about to arrive.”

Don’t masquerade with the guy in shades

Oh yeah, Lorca was Mirror Universe Lorca the whole time, which was a reasonable guess at any point after he showed up. It turns out he didn’t act like a Starfleet captain that whole time because he wasn’t one. 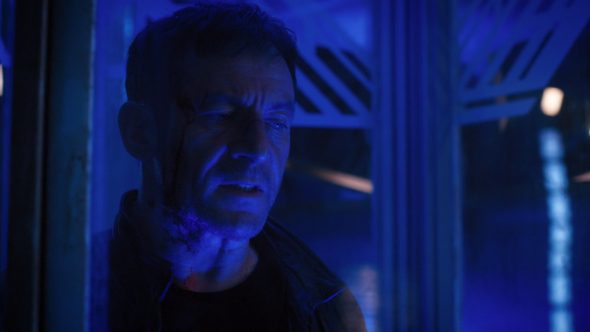 I like finally having this out in the open. Even though this Trek show shown characters not as islands of stability in a stormy universe, but as swept up by the currents, it still feels good to know where everybody is treading water, more or less.

I just hope, now that he’s gone rogue for real, that Lorca has enough practice grabbing dudes by their lapels and asking them where the device is.

You got it made with the guy in shades

Finally, we can’t talk about this episode without talking about the stirring reunion between Paul Stamets and Hugh Culber. I refer to the pair as “Hugh and Stamets” for euphony’s sake, even if it’s one first name and one last. But now that seems fitting, as the two stand on opposite sides of their own metaphysical duality: Stamets is alive, while Hugh is dead. 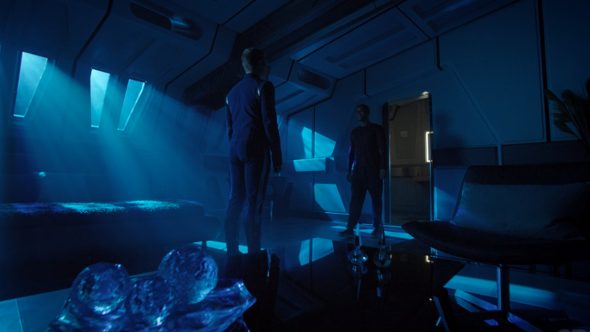 And their meeting is properly beautiful and operatic, taking us back to the moments of tender couples toothbrushing in matching Starfleet PJs, but returns us to “The Woods,” where, of course, there is beauty, but also a monster.

It introduces us to a new Big Bad for the season, a corruption threatening to destroy the mycelial network and perhaps life in the universe as we know it. With this blight on the other side of the door, the season might not turn on a war we already know the result of, but on something else. 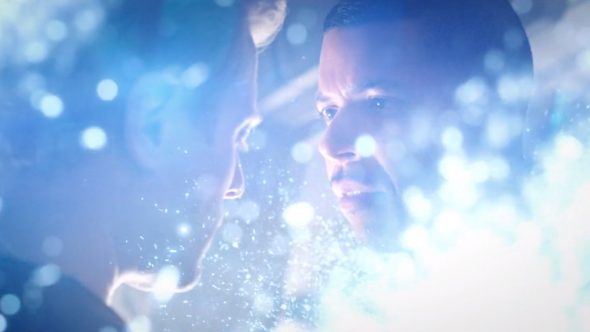 The light incrementally brightens through this whole sequence.

And to close, I’ll say it also reminds me, in its threat and promise, of Longfellow’s introduction to  Evangeline.

This is the forest primeval. The murmuring pines and the hemlocks,
Bearded with moss, and in garments green, indistinct in the twilight,
Stand like Druids of eld, with voices sad and prophetic,
Stand like harpers hoar, with beards that rest on their bosoms.
Loud from its rocky caverns, the deep-voiced neighboring ocean
Speaks, and in accents disconsolate answers the wail of the forest.

This is the forest primeval; but where are the hearts that beneath it
Leaped like the roe, when he hears in the woodland the voice of the huntsman?
Where is the thatch-roofed village, the home of Acadian farmers,—
Men whose lives glided on like rivers that water the woodlands,
Darkened by shadows of earth, but reflecting an image of heaven?
Waste are those pleasant farms, and the farmers forever departed!
Scattered like dust and leaves, when the mighty blasts of October
Seize them, and whirl them aloft, and sprinkle them far o’er the ocean.
Naught but tradition remains of the beautiful village of Grand-Pré.

Ye who believe in affection that hopes, and endures, and is patient,
Ye who believe in the beauty and strength of woman’s devotion,
List to the mournful tradition, still sung by the pines of the forest;
List to a Tale of Love in Acadie, home of the happy.

2 Comments on “Star Trek: Discovery – I Wear My Sunglasses at Night”