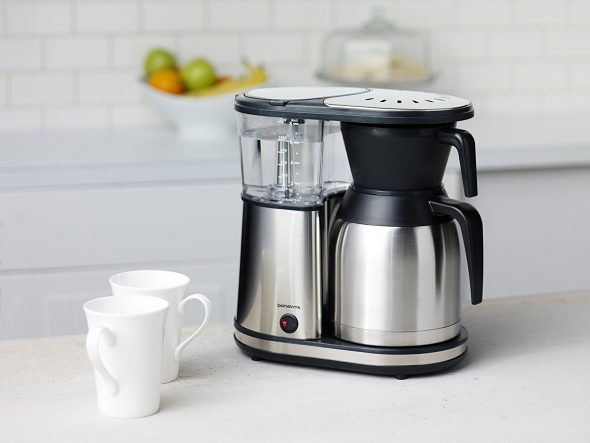 One day last winter, around the holidays, I was surprised to receive a late-breaking wedding gift from my good friend Matt Wrather. As I eagerly cut through the Amazon Prime packing tape, I tried to guess which of the remaining registry items Matt had purchased for Rachel and me. Perhaps the food dehydrator, so that we can make our own jerky and dried fruit? Perhaps the piece of cookware that would complete our Le Creuset collection? Whatever it was, I was certain it would be sincere and thoughtful, as Matt is my most sincere and thoughtful friend.

When I finally opened the shipping box, I stared blankly at its contents, the Bonavita BV1900 Drip Coffee Maker. Had Matt really gotten me a drip coffee maker? A drip coffee maker that wasn’t even one of the eight types of artisanal coffee brewing equipment listed on my wedding registry?  Was I being trolled on my special day?

Once I was able to overcome my mixture of disappointment, confusion, and rage, I remembered that my beloved temperature control gooseneck kettle, featured in an earlier gift guide,  is also manufactured by Bonavita. Was it possible that I wasn’t the brunt of some kind of masterfully passive aggressive practical joke, but instead was marveling at the work of a gift giver who was so insightful that he had filled a need of which I wasn’t even aware?

Once I unpacked the BT1900, it took very little time to realize that I wasn’t being trolled at all. While the machine has all of the convenience of a standard drip coffee maker, it is precision-engineered to replicate the painstaking and artisanal process of making pourover coffee. The water is pumped from the storage chamber, heated to just-below-boiling, and sprinkled gently over the ground coffee with all of the tenderness of the rain shower at an exclusive spa. The coffee drains into a vacuum-sealed stainless steel carafe that keeps the coffee warm for hours.  While I haven’t abandoned my V60, Chemex, or Toddy, the Bonavita has become indispensable for both work days when we need to get out of the door quickly and lazy Sundays when we want many cups of coffee over the course of the morning. As I savor every perfectly brewed cup of coffee from my Bonavita, I also savor my friendship with Matt, who knows me better than I even know myself.  – Ryan Sheely

It’s a trite commonplace saying that it’s hard to bros to breh-xpress bruh-motion. And not to get all Saving Silverman or anything, but when my bro and fellow podcaster Ryan fell to the institution of marriage, I had one or two ambivalent feelings, and I confess that I waited quite a while to find a wedding gift that could encapsulate in retail form what those feelings were.

It was a beautiful artisanal, bespoke, farm-to-table ceremony. It was very intentionally the most tastefully DJ’d of receptions. Of course I was happy for him and for TFT Punk Correspondent Rachel D. But as I wiped my watering eyes—the room must have been dusty, I don’t know—and many times in the months to follow, I felt like something would be lost: As bros, we had shared so many different kinds of experiences together! Brewing coffee in a Hario v60… brewing coffee in a chemex… brewing coffee in a french press… cold-brewing coffee in a toddy… making fun of how other people brew coffee… like those #basic fools who do it in a drip coffee maker.

And that’s when I knew what I’d get Ryan and Rachel to celebrate their marriage, and to help them embark on this next phase of their domestic life. Also, the holidays were really close, so I could kill two birds with one Amazon package. It’d be a gift to say that though things were different, some things—the important things—would still be the same. He would still need fairly traded, single origin, locally roasted beans. He would still need to weigh them out at the tradition 15:1 water-to-bean ratio. Under no circumstances could the water exceed 205ºF because we are not animals.

And come the hell on. When he opened the box and found a coffee maker, he’d be so so expertly trolled. Man I wish I’d told Rachel beforehand so that she could have videotaped it or something.

The only constant in this world is change. And sometimes, as you grow and learn, you find yourself wanting a drip coffee maker, something you could never have imagined as a younger bro. But with a little thought and a little e-commerce ingenuity, you just might discover your own Christmas Miracle. Bro-y Holidays. —Matthew Wrather