On Monday, Fenzel launched a discussion about how elements of Agile product development seem to be having an impact on strategy in the Civilization series. However, in the midst of that discussion, he was compelled to take a step back and ask an even more fundamental question:

Pete Fenzel: With the Cold War long gone, the pop age of Guns, Germs, and Steel over, and great cultural and scientific triumph no longer in fashion, is Civilization still relevant?

Certainly the series depends on a certain casual ethnocentrism that it has tried to tamp down in the latest iteration – the leaders speak in their native languages, there is an effort to represent a very wide range of skin tone, gender, and social role and to avoid very well-known conquerors (there’s Trajan instead of Julius Caesar or Augustus, there’s Pericles and Gorgo instead of Alexander the Great, there’s Catherine de Medici instead of Napoleon or Louis XIV, there’s no Bismark or Mao. They might be waiting for an expansion for a lot of the big names, or they might be pushing away from the great conqueror / great leader / great man / great empire paradigm that is so historically comfortable but at this point terribly regressive. 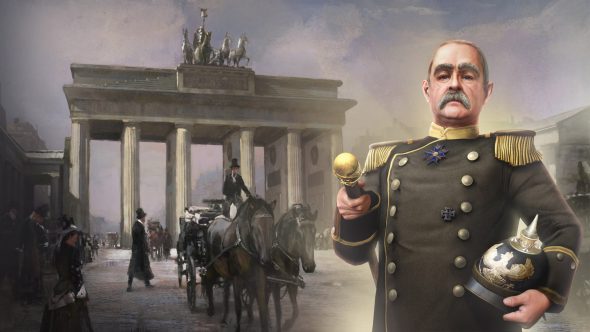 Also the victory conditions seem to be getting less clear and less triumphalist. Things you used to be able to do in Civ to win the game that you can’t anymore: 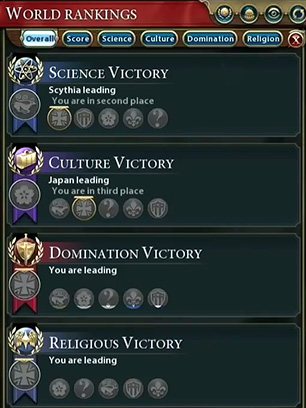 It feels like the Civs dream smaller than they used to. The ending animations feel cheap and minor, almost mocking you for your ambition, or humoring you, but pitying you, for winning through war.

A lot of this might come with the bonus of ending multiplayer games faster, which is good, but it brings some storytelling along with it.

Another weird thing about this game is founding a religion is much less powerful than it was in the last game, and also riskier and harder to do. It’s often the right strategy to just forego building any holy sites or shrines at all, with the unfortunate cost that if the computer opponent attempts to win through religious victory, your only option late in the game becomes to murder any missionaries that come near your territory with artillery shells (well, actually, you can murder them any way you want, you just have to murder them or you lose).

Parts of Civ VI do feel like they’re blaming you a bit for liking previous Civ games. Your advisor is a sanitized, sensitive soul who relays basic game information with empathy, as opposed to before, when video capture of random nerds in togas used to exhort you to make the streets run red with blood. 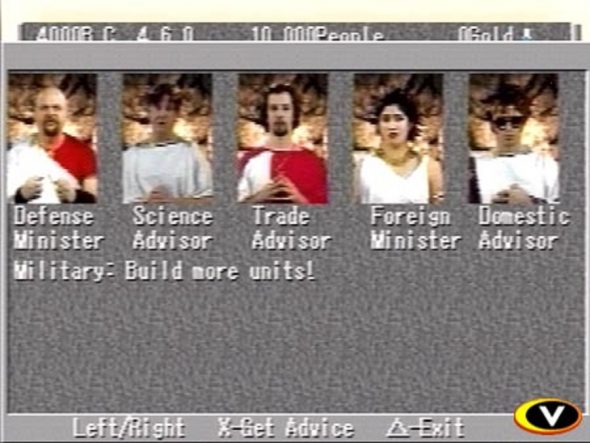 I don’t mind Civ becoming less of an open endorsement for global war, but isn’t that grand fantasy of supremacy baked into it already? And it’s certainly not very funny anymore, even as it has gotten more cartoonish and added a lot of jokes (read deadpan by Sean Bean).

And what does it take for Civ to reform itself? Is it enough for it to be “less bad,” or does that just make it “lesser?”

Jordan Stokes: I’ll say this: It’s funny that they define being a massive tourism destination as “winning.” Rather than as “getting soft-colonized.”

Although if you care mainly about culture… when the Roman empire took over Greece, did the Greek civilization “beat them,” culturally speaking?

John Perich: I hate to be the one who can only communicate this in terms of Civ V, but in Civ V at least, there was a background calculation of the ratio of your “tourism” vs. their “tourism.” Once your tourism swamped theirs by a set ratio, you overtook them and achieved cultural dominance. Certain factors, like open borders or a shared religion, could accelerate that process.

This translates, to me, as “I prefer a foreign culture to my own,” which is as clear a metaphor for “cultural domination” as I could come up with.

But it is something of an alien experience for me, a lifelong American, since I’ve lived my life in a civ that’s perpetually about 10 turns away from a complete cultural victory. They keep the threat of a conquest victory around just in case but don’t seem committed to it.

Stokes:  A fundamental issue with Civilization is that it’s mashing together a bunch of different games. (This is also a big part of its charm, of course.)

There’s the “develop modern civilization” game, just exploring the tech/culture trees. And this exists alongside — and interacts more or less intuitively with — the Sim City-ish resource management game and the historical battlefield strategy game. Build mines and invent bronze so that you can recruit hoplites, etc. 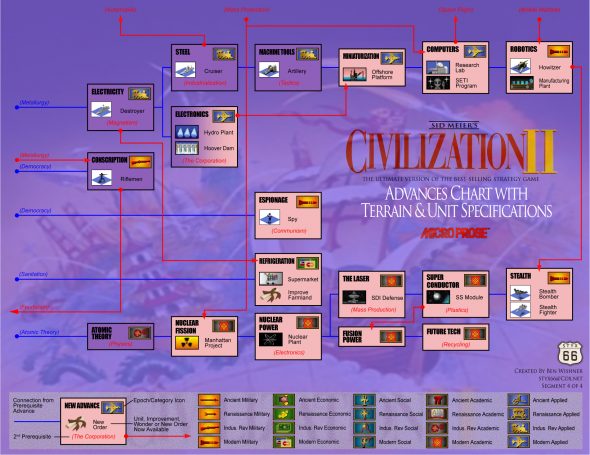 But something weird happens when your civilization catches up with modern civilization. The “develop civilization” stuff starts feeling more nakedly mechanical — rather than feeling like you built the Hubble Telescope, you feel like you got a bonus to spaceship production. (I think this is down to us not having a good enough historical imagination. It’s hard to think seriously about the invention of bronze: bronze has always existed, hasn’t it? So if you tell me that it just lets you build some slightly stronger stabby-guys, I’m like: “sure, that’s probably what it was really like.” But the Hubble — I’m not a Hubble expert, but  know enough about the Hubble to know that it doesn’t have that a crudely productive function of that kind. So basically immersion is broken by this.

Perich: Hm – I don’t know if any of the earlier tech tree feels less mechanical to me. I don’t get that excited about discovering Gunpowder or the Printing Press – I get excited about being able to stage musketeers or expand trade relations. So climbing the tech tree doesn’t particularly break immersion for me.

What breaks immersion for me is it taking 20 turns to explore and secure the continent around my founding city with 1 scout and 1 warrior, with each “turn” taking 25 years. So there’s a military unit that’s been ranging abroad for 500 years? What does “home” even mean to them?

I know that, in the reality being simulated, the lone scout 30 hexes away isn’t meant to be a single unit, but rather represents the expanding frontier and a perpetual cycle of soldiers on the front, soldiers coming home, PTSD, etc. But the game doesn’t help that immersion much.

Stokes:  Yeah, the different games take place on different temporal scales. Because most of the turn-to-turn decisions are about what you do with the units, I tend to think of that as the “real” scale, the game clock notwithstanding. (Which would mean that, rather than sending a cavalry unit on a 500 year exploratory mission, you have a civilization moving from flintlocks to nukes over the course of a five year war.)

But then there’s the game of world conquest. For some reason, I’m fine with playing this game when I’m playing with bronze-age units, and even up through smooth-bore rifles. But once we’re dealing with tanks and nukes, I stop wanting to do it. 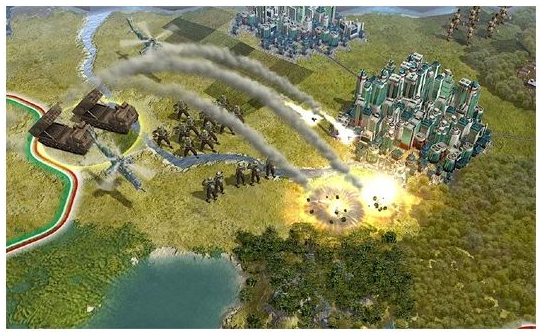 I feel like the goal at that point should be: PREVENT the world-spanning total war. That’s even programmed into the game to a certain extent: nukes destroy the landscape, and building the spaceship feels sort of like winning on hard mode. Still.

For me — and I’ll own that this is an idiosyncratic impulse — the world-domination game and the develop-civilization game both kind of fall apart once you reach the modern era. Winning the first feels monstrous, winning the second feels fake. (I mean, in a way: I get that it’s just a game, but the flavor still matters.) I kind of want Civilization to dream small, at that point. Once you build your civilization up to approximately the present day, I think it should turn into Sim City, where the game doesn’t even have a win state, and the goal is just to flourish and thrive for as long as you can.

2 Comments on “Is Civilization Still Relevant?”