Peter Fenzel: So has anybody else been playing Civilization VI, and/or does anybody have experience actually working in an Agile environment, where (to oversimplify) you deliver an application or product as soon as it’s ready to use, and then change it later, rather than only selling the product when it’s finished? 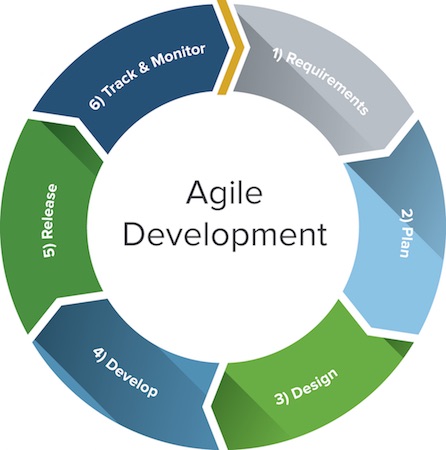 Matt Belinkie:  I have some Agile experience. Is that relevant to Civ?

Peter Fenzel:  I think it might be. I’ll explain.

The progression of the game isn’t all that odd in itself, but it’s interesting, because it’s a game that, at its heart, is still quite similar to the first Civilization game that came out in 1991, so there’s a lot of past versions to compare each version to.

But with this addition, we had a press version come out a month or so before release with limited play modes and features, then the release version, then the patch a month later that solved a ton of problems with the game.

And the way software development works these days, you’ve got to think the patch was moving pretty fast – that the team might have gotten some time off after the launch, but it seems like if the patch wasn’t started before the game came out, it was expected and started very soon after.

The patch addressed some big problems, including some big exploits that made it pretty much unplayable as a multiplayer game without mods (there was an exploit where one civilization could max out horseman production so fast that it was cheaper for them to build horsemen, delete them and get a refund, and use the money to buy buildings than it was to build buildings – and another where you could get infinite money by selling nuclear submarine armadas for less money than it cost to buy them). 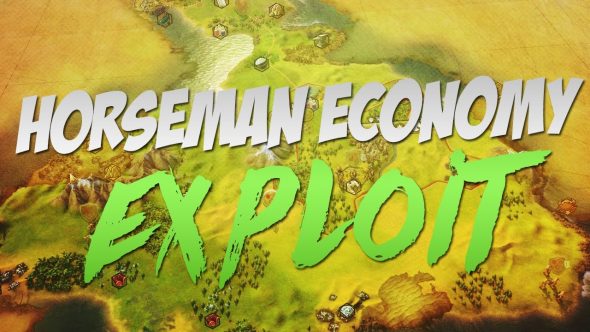 This all felt very familiar from the Civ V launch, which also launched with a bunch of problems and appears to be patched along a similar timeline.

But that didn’t stop online communities from getting very angry about the quality of the game at launch – as the performance of mass anger at game developers to hold them accountable for patching problems in their products is a well-known dance at this point. But this also has a huge potential impact on  game difficulty, which is something that has been discussed much less.

Civilization is a very complex game that is meant to be a strategy game but also provide a sort of role-playing experience. You get to choose your path for how you want your civilization to win, and you always have: conquer the world, colonize Mars, start a religion that takes over every other Civilization, and my personal favorite, accumulate so much culture, great works of art and music, archaeological museums of relics from around the world, national parks, and seaside resorts that more people go on vacation in your civilization than go on vacation in their own country in any other civilization.

And it’s been a truth about these games most of the time that playing the game optimally to win doesn’t really encourage you to enjoy everything the game has to offer – as human beings have to figure out how to play the game well before they can program a computer to do it, and “how to play the game well” changes drastically when they change the rules of the game and values of things, which they constantly do in different versions, patches, expansion packs, etc. And they also keep making new engines for it, which sets them back as well.

One persistent trash/treasure is “Infinite City Sprawl” (ICS) – that is, founding many many small cities and filling the world with them because building big cities, while encouraged by the game’s roleplaying and features, isn’t actually the best way to win. In some of the iterations, that’s the dominant strategy. “Going wide” as they say, is quite good right now.

So the upshot of all this is the computer (I hesitate to say “AI”) is very bad at playing Civilization VI. The game is too complicated for it, and the way to win is not known. The computer has objectives, but they don’t really work toward winning the game, except by attacking in ancient times or spamming a religion. They want the computer to encourage roleplaying, too but it gets to the point where the computer keeps repositioning troops forever and never actually takes cities. Like, never. 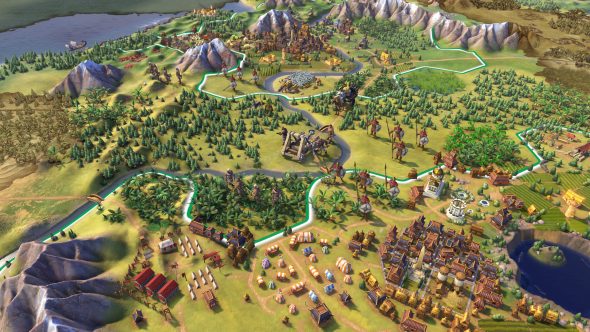 And the solution in Civ is to use the difficulty level to give the computer bonuses and the player penalties, rather than making the computer more strategically capable of winning the game.

And here’s why I ask about Agile –

This is not new. The computer opponents in Civ have always been mostly the same amount of dumb and heavily favored by bonuses to them and penalties to you at higher difficulties.

But what is new is the expectation that this might change, either by patches, expansion packs, or mods.

The computer is really really bad this time, though. The game is a big departure from previous versions in certain strategic ways (there’s more of a “city planning” element where you have to place buildings in different configurations, rather than just manage production possibility frontier for a city on a sliding scale, and diplomacy is very very complicated, to the point where the computer behaves erratically and seems to break its own rules in ways that feel like bugs). So it seems likely that it has to be fixed, whereas in past Civ games it was still fun to play even when the computer cheated or was bad.

And I’ve got to think that this reality of entertainment is really reinforced by the profitability, cash flow, and customer engagement benefits that come with using an Agile approach.

As in, this isn’t just about Civ AI, it’s about everything. We should begin to expect our media to change and improve as we consume it, from a low baseline. This is more than just chopping up a finished game into DLCs or crippling a pair of advanced headphones after you’ve made them to sell them for cheaper. We’re entering a world where the product is not done yet when you buy it.

What do you think? Either about the Civ side or the Agile side?

John Perich: Is going wide really the dominant strategy? I haven’t even cracked 1000 hours on Civ V, but what little I’ve read (and what I’ve played) suggests that (1) going tall and going wide both have their merits and (2) if you can’t build Petra just reset after spawn, because GOD. (I’m kidding on that last one) (but only a little)

I’m asking non-rhetorically. If there’s documentation or reasoning that going wide is superior, I’d love to read it! I thought the population / culture penalties got pretty staggering after a while. 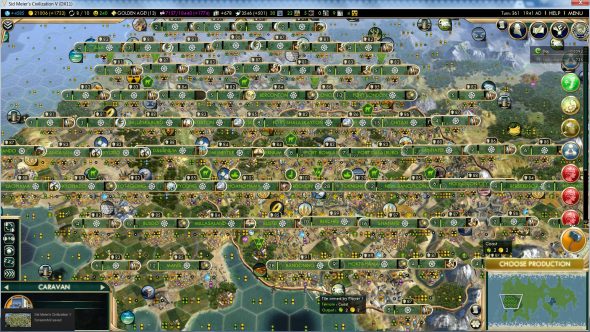 Fenzel:  Civ V indeed had a “going tall” vs. “going wide” strategic divide, where both strategies had their place. Civ VI has dispensed with most of the penalties for having a lot of cities, so going wide is powerful again. When I think of ICS being “dominant,” I’m thinking back to Civs I, II and III. Civ IV introduced penalties for it, Civ V tried to balance them, and Civ VI made going wide great again.

Another thing that’s interesting from a satisfaction perspective is the automated computer players in Civ VI are programmed to be vain, vengeful hypocrites, but the art style of their conversation animations is very round, soft, cartoonish and friendly. So a lot of people complain that events that make perfect sense with regards to real life don’t make sense in the game. 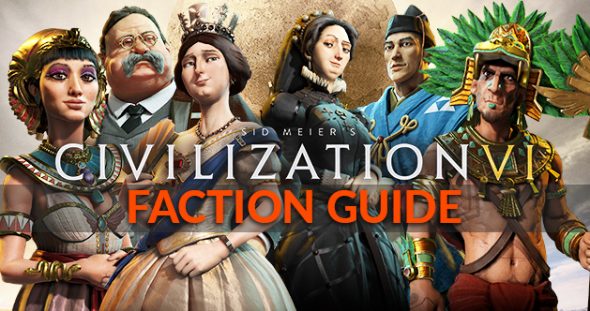 Like a civilization encouraging you to go to war with its enemies and then turning around and denouncing you as a warmonger in front of the rest of the world.

Sometimes it doesn’t work (like declaring joint war with someone is awkward with warmonger penalties), but based on the assumption that the game isn’t done, should the game developers Firaxis patch its take on the pettiness of tyrants to meet Polyannish player expectations?

Or maybe Firaxis should patch the graphics so they look meaner with darker, downwardly angled eyebrows, frowny faces and more sharp angles. 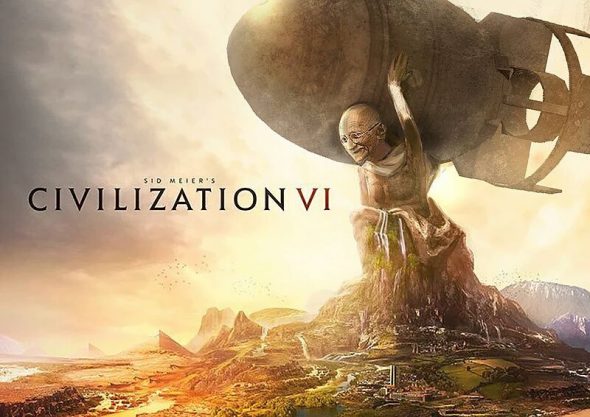 Fenzel:  Goofy and charming at first. The way diplomacy works now though is that every leader has two specific agendas in addition to their baseline preferences (stuff like not liking civilizations of other religions or not liking civilizations that won’t fight wars). One is generally known and one is generally secret. I have not taken Gandhi that deep into a game, but from what I hear his secret agenda is likely to be a powerful fondness for nuclear weapons. 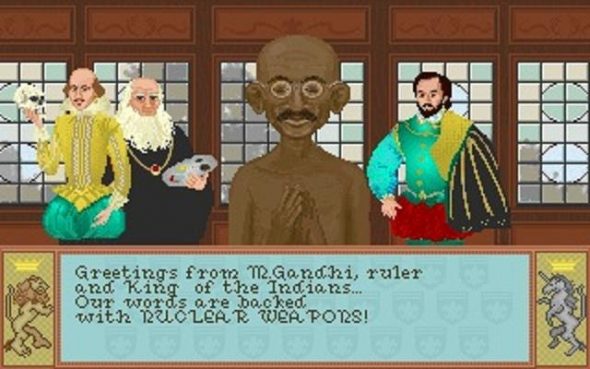 That story and history is so wacky – how Civ Gandhi is this character distinct from historical Gandhi. From what I’ve seen so far, they paid tribute to it.