It all began with NCIS.

Or, I should say, it really began with JAG. Because what many people don’t realize about NCIS (a.k.a. the most popular show on television) is that it’s actually a spin-off of the show JAG, the 100% accurate depiction of the day-to-day life of military lawyers. 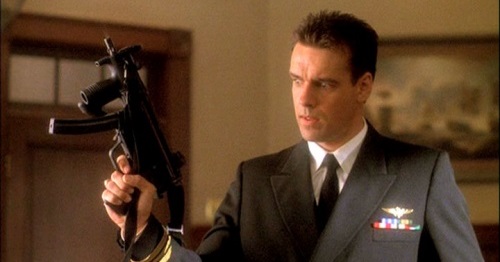 A two-episode arc of JAG, then in its 8th season, featured Agent Jethro Gibbs arresting CDR Harmon Rabb for a murder he didn’t commit. This turned into a back-door pilot for NCIS, which ultimately spun off two more shows, NCIS: Los Angeles and NCIS: New Orleans. JAG ran for 10 seasons; NCIS has run for 14; NCIS: LA for 8; and NCIS: NO for 3. That’s a whole lot television, all arguably part of the same shared creative universe.

So I began to wonder: just how big is the JAGiverse? Here’s what I came up with:

That’s a lot. 33 thousand minutes comes out to  552 hours, or a little more than 23 days worth of content. If you started watching on December 1, and didn’t stop to eat or sleep, you’d just barely be done by Christmas.

But how does that compare to other shared TV-universes? Most importantly, what is the largest shared TV universe? I did a deep dive into the longest-running American TV shows, and came up with this: 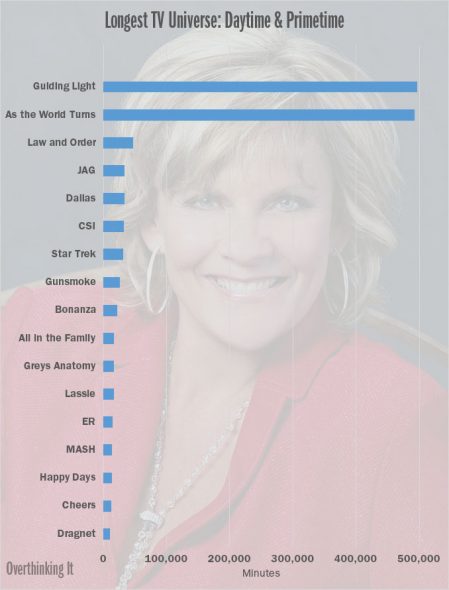 Oh, what’s that? You can barely see JAG all the way down there? On reflection, it should be unsurprising: the largest TV universes are daytime soap operas, and it’s not even close.

The longest running scripted American TV show of all time was Guiding Light, which started as a radio show and ran on TV for 57 years. While I could not find a comprehensive list of Guiding Light episodes, the numbers I could find indicated something like 15,762 episodes that aired on television. These varied in length, starting with 15 minute blocks in 1952 (after transitioning from radio), expanding to 30 minutes in 1967, and then expanding again to the more familiar 60 minute format in 1977.

With some back of the envelope math, this puts Guiding Light at something like 496,000 minutes of total airtime. That’s 8,275 hours or 344 days. If you started watching Guiding Light on New Years Day and did not stop to eat, drink, or sleep, you would still not be done with it all before Thanksgiving.

The only shared universes that come even close to this total are other soap operas. As The World Turns, for instance, comes extremely close, clocking in by my math at somewhere around 492,000 minutes. [Note: because they are so close in total time, and because of the difficulty in finding good data on the actual lengths of episodes, it is possible that ATWT actually has more total time than Guiding Light.]

Those are the two longest running soap operas, so I gave up there. A whole bunch of other soap operas (e.g. General Hospital) are somewhere in the same general ballpark (i.e. hundreds of thousands of minutes), but you get the idea. Anything that’s run every weekday for a couple decades is going to have a whole lot of runtime. Indeed, the longest running soap operas are more than 10 times larger than a universe like the one shared by JAG and NCIS.

OK, so soap operas air pretty much year round, putting out 5 episodes per week, and they’ve been running continuously since the 1950s. No other kind of scripted show can hope to compete with this volume of content. So let’s leave the daytime soaps aside for a second, and ask a different question: What is the largest PRIMETIME scripted TV universe? 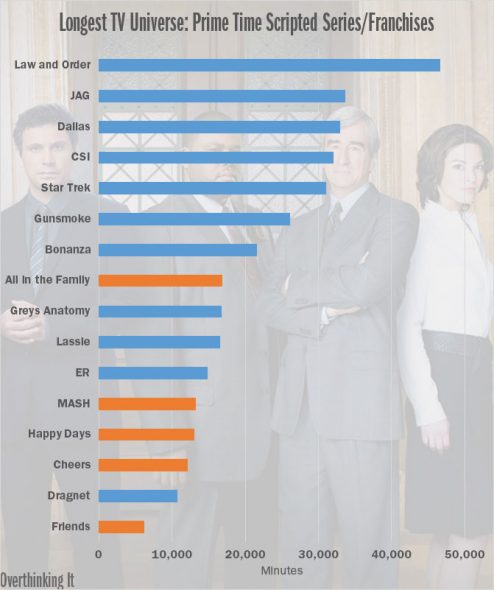 And it’s the Law and Order franchise (i.e. the Wolf-iverse) with the win! Coming in at a whopping 46,000 minutes of total airtime, the legal/police procedural is the clear winner of the longest-franchise/shared-universe crown. That number might even understate things a bit – it doesn’t include either Homicide: Life on the Street, which shared characters and had a lot of crossover with Law and Order, or the Chicago shared universe, which was also produced by Dick Wolf and was intended to be at least a spiritual spin-off of the Law and Order franchise.

From there, the top results are mostly dominated by a mix of (1) Police and legal procedurals; (2) Westerns; and (3) primetime soap operas.

There are a handful of sitcom franchises in there (notably, the Happy Days/Archie Bunker-verse which features a whopping *7* different shows), but these shows have a tough time competing because of the relative length of a single episode. Most dramas fill an hour of TV time (so 43 minutes of actual show), while sitcoms generally last only a half-hour (22 minutes of actual show). This makes it nearly impossible for sitcoms to catch up to the big dramatic franchises like Law and Order or CSI.

But how did other long-running shows build to their totals? I broke down some of the highest ranking dramas, and came up with this: 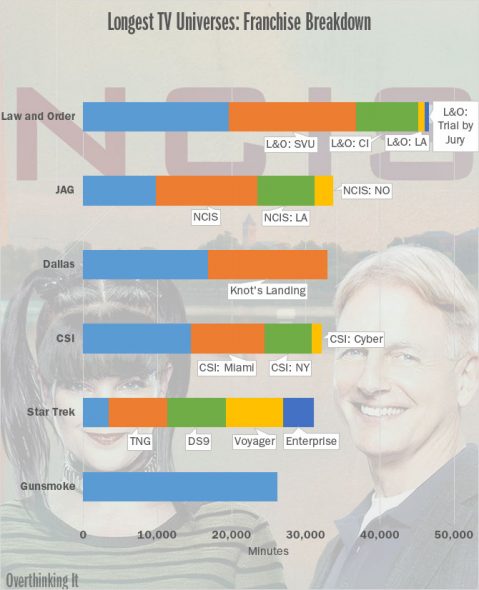 What’s interesting to note is that there’s no real pattern. Instead, you’ve got a bunch of different strategies – on one end of the spectrum you have an old-school western like Gunsmoke where the original series just ran for an insanely long amount of time. On the other end you have Star Trek, where the original series has long since been eclipsed by not one or two but three different extremely long-running and popular spin-offs. And in between you have a show like Law and Order or NCIS, which had two long-running series that account for most of the runtime, but still had some smaller spin-offs to pad the total.

Note that I’m defining “shared” universe very narrowly, including only shows that are created with the idea of being in the same universe as another show. This means we’re basically dealing with:

So yes, the Tommy Westphall shared universe is massive (including more than 400 different shows), but I don’t think it really counts. A single character crossing over to appear in a single episode is more of a wink at continuity than it is truly a sign of a shared reality.

This arbitrary choice is also a practical one – trying to document every crossover and the crossovers to the crossovers is a daunting task, and would make it nearly impossible to come up with a coherent answer.

Note also that I had to do some guesstimating on the exact length of episodes, so I generally assumed that an hour-long show has 43 minutes of actual content, and a half-hour long show has 22 minutes. Finally, I mostly left off stuff like hour-long specials and double episodes and the like. When you’re dealing with numbers this large, those should mostly come out in the wash.

And with those rules in place, Law and Order is the clear winner – the original series aired for 20 years, SVU has run for nearly as long, and even Criminal Intent had a not-insubstantial runtime. The short-liveed L&O Los Angeles and Trial by Jury had only a negligible effect on the total.

Ultimately, though, there’s more than one way to build a TV universe. If you’re a soap opera, you do it one relentless day and week at a time, burying the competition in a tide of soft-focus melodrama. If you’re in primetime, you have to do it one case, shoot out, or joke at a time.

26 Comments on “What is the Longest Shared TV Universe?”