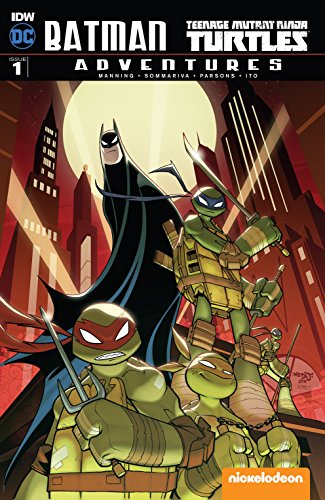 And so are Batman and the Ninja Turtles, together again for a second crossover series after the spectacularly successful first one earlier this year. While that series crossed over the continuities of the current ongoing mainstream DC Batman with IDW’s original TMNT series, this one addresses the convergence of the Nickelodeon TMNT cartoon (2012-) with the groundbreaking Batman: The Animated Series (1992-1995). And while the previous crossover addressed some of the similarities and differences between the Turtles’ style of justice and Batman’s mostly through the lens of hybridity (opening, for instance, with an encounter between the Turtles, who had been transported to Gotham City, and the Batman villain Killer Croc), this series – targeted at a much younger audience than the previous one – approaches the same subject from a slightly different direction, namely duality. It’s a subtle difference, maybe, but an important one, and it’s introduced here with Batman taking on Two-Face, who has, evidently, engineered yet another in a seemingly endless cycle of mass escapes by prisoners of Arkham Asylum – this time, through the use of dimensional portals that transport the Dark Knight’s rogues gallery to the Turtles’ New York City.

When the last Batman/TMNT crossover happened, I complained – well, not complained, but remarked upon – the almost unavoidable problem that crops up when you have two distinct continuities cross over with each other, which is that the plot of the story nearly inevitably ends up being “Character X is trapped in Universe Y! The heroes from the two different worlds meet, have a misunderstanding that results in a fight, but is resolved, and then the heroes from Universe Y help Character X get back to Universe X before it’s too late.” It’s difficult to break out of that narrative schema, and usually the best we can hope for is that the creators draw within those lines in a sufficiently cool and entertaining way.

That is exactly what the first Batman/TMNT crossover did. Writer James Tynion IV showed off his storytelling skills and his depth of understanding of these characters, and delivered a practically-perfect comic event. That fact raises the stakes a bit for Matthew K. Manning, who penned this second crossover volume – sure, this is a different Batman and a different set of Ninja Turtles, but you also need a new and different way to tell what will basically the same story, which isn’t going to be easy.

We’re off to a good start, though. It seems as if Harvey Dent, having discovered a way to travel to an alternate universe – sees this as his opportunity to escape not just Arkham Asylum, not just Gotham City, and not just Batman, but himself. The main antagonists of this issue are Two-Face and Clayface (whom Michelangelo keeps calling “Mudbutt”), both of whom have issues of ambiguous or ambivalent identities that look like they’ll nicely resonate against the identity issues that the Turtles have; while the Turtles struggle to synthesize the conflicting sides of themselves, Clayface has the ability literally to change shape into practically whoever or whatever he wants, and Two-Face’s whole thing is that his separate personalities remain utterly unreconciled with one another – they take turns being dominant but even that is determined not by any rational system of compromise but by chance, by the flip of a coin. With the new knowledge that there’s another world out there, a world in which neither he nor his enemies ever existed, Two-Face sees a unique opportunity not for reconciliation but for true and complete escape.

That’s a theme that is thick with storytelling possibilities. As a matter of fact, synchronistically enough, something similar occurs in two others of this week’s comics… 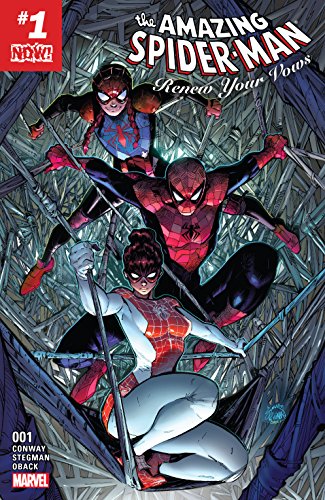 In 2007, Spider-Man made a deal with Mephisto to save the life of Aunt May in exchange for retconning his marriage to Mary-Jane Watson out of existence. This was broadly derided by comics fans as a totally dumb move and basically a slap in the face to readers. In last year’s Secret Wars – the 2015 entry into Marvel’s tediously annual world-shaking mega-events – we got to see a version of the Marvel universe where this retcon never occurred, where Peter and Mary-Jane remained together (or, like, were never rendered untogether?) and had a child, Annie May Parker, who inherited Peter’s spider powers. That limited series was written by superstar Dan Slott, who has actually written Spider-Man for longer than any other single writer, and it was (as I reported at the time) pretty – dare I say it – amazing.

The premise of Secret Wars was that the multiverse was collapsing, and only small pieces of the once-numberless worlds had been preserved. This version of the Spider-Fam was one of them. But while it was implied that the Marvel Multiverse would be reduced to a single continuity, thankfully that isn’t what actually happened. The Ultimate Universe did end up being destroyed, although that world’s Spider-Man, Miles Morales, survived and was transplanted to the mainstream Marvel Universe that Reed Richards remade. A whole new world debuted, though, and this is our visit back with the versions of these characters that we thought should have been the “real” ones all along.

One of the best things – but also one of the sometimes frustrating things – about comics and related fandoms are the fact that there can be so many different versions of the same characters running around. It’s a strength when there can be a Batman for kids and a Batman for grownups, or a reboot that reintroduces the character in an updated context that can still run in parallel with the continuity that’s been going along for fifty or seventy-five years. It can also get confusing, though, and snarl up continuity, and even damage other versions of the character if one of them gets screwed up too much. Batman and Robin wrecked people’s perceptions of Batman for years, even though it didn’t affect the comic book Batman at all; One More Day, the Spider-Man story that made Peter Parker a bachelor again, did something similar, albeit on a smaller scale, for that character. It doesn’t look like they’re going to be retconning that retcon, but at least we know that there’s a version of Spidey out there in the multiverse somewhere that is the way he’s supposed to be.

Where to Start: the beginning is this.
Recommended if you like this: The Amazing Spider-Man: Renew Your Vows Volume 1 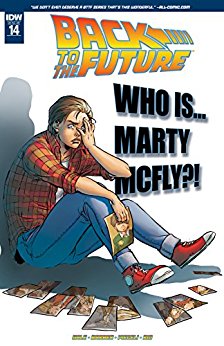 Back to the Future #14
IDW Comics

Marty McFly is well acquainted with alternate timelines. But the rules of time travel have always been a little ambiguous in that world (as we have pointed out in the past – get it? In the past?). It’s not as bad as the contradictions in the Terminator series, but there are still inconsistencies. Is there one single timeline that can be altered and overwritten by changing something in the past? Or does time travel create multiple timelines that exist in parallel to one another? Most of the time in the BTTF movies, things operate as if the former is true, but in Part 2 when Doc and Marty are trapped in Biff’s Hell Valley version of 1985, Doc seems to imply that the original 1985 wasn’t erased but rather just skewed into a tangent universe. What gives?

One of the things that makes this current BTTF comics series so suprisingly great is that it isn’t just a series about Doc and Marty’s ongoing adventures through time. A series like that could have been perfectly good, but the creators of this series go the extra mile and have really started digging into the questions and problems that the original movies created, and are using them as narrative engines for producing new stories that feel uncannily like the movies did all those years ago.

What happens in this issue, for instance, is something that we at Overthinking It pointed out as one of the films’ problematic implications back in 2009: in the new 1985 where Marty’s parents are cool and in love, his siblings are well adjusted, and Biff washes cars for a living, Marty doesn’t know anything about his own life. All his memories of his childhood come from a world that now no longer exists – or that at least is not the world in which Marty now lives. The Marty from this world, the one who knows that he owns a cool truck and that George McFly is a college professor and so on – let’s call him Marty 2 – is the guy that Marty 1 saw going back in time after Doc is apparently-but-not-really killed by Libyan terrorists at the end of the first movie. What ever happened to that guy?

This issue of the comic dives right into these questions, and is legit fascinating and refreshing for it. In the last story arc, Marty was dealing with how boring his normal life seemed now, after his adventures through time. In this one, Marty’s feeling thoroughly unmoored, as he now has a life that’s by all accounts much better than the one he left behind, and yet he doesn’t know how it got that way. He doesn’t even know how he and his girlfriend Jennifer met in this reality. In the midst of this crisis, Marty meets a scientist, Professor Marcus Irving, who has himself been working on a time machine for almost 25 years – since 1962, when the government hired him to do just that. Unbeknownst to Prof Irving at the time, he was the government’s second choice; they had first approached Dr. Emmett Brown, who had previously worked on the Manhattan Project during World War II. At first, Doc complied, but quit the project and only worked on his time machine freelance, in secret, until the events of the first movie transpired. Prof Irving, however, having now discovered that Doc was in fact successful in his experiment, wants a peek at the one thing that has been eluding him – the flux capacitor – and is convinced that Marty 1 is doomed to disappear unless they can return him to his original timeline.

The practical implications of alternate worlds – whether the result of time travel shenanigans or (in Marvel’s case) real stretchy guys blowing bubbles, are obviously on a lot of people’s minds these days. If you can’t change the world, after all, maybe there’s another world out there somewhere that’s better.

Where to Start: Back to the Future Volume 1: Untold Tales and Alternate Timelines
Recommended if you like this: B^F: The Novelization of the Feature Film by George Gipe by Ryan North