Black Mirror is back on Netflix with a new run of six episodes. The anthology series, which now boasts 13 episodes in total, explores the dark side of technology in a variety of ways – it’s basically The Twilight Zone for the digital age. The “Black Mirror” of the screens that suffuse our daily life are target #1, but the episodes vary widely in tone, pace, and setting. 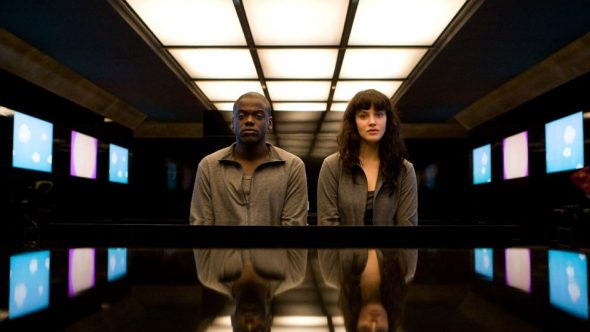 Breaking things down to the most basic, there are essentially two “variables” that Black Mirror likes to play with.

The first is the most obvious: technology. There’s a sliding scale of technological advancement in the Black Mirror-iverse. In some episodes, the technology is essentially indistinguishable from what we have today; in others, the technology is so advanced it might as well be the work of a wizard.

The second variable is a little more subtle: the culture around technology changes somewhat independently of the technology itself. In some episodes, people react to technology in more or less the way we might expect people of the modern world to react; in others, society has changed in some fundamental way in reaction to new tech.

With these two variables in mind, I think we can basically come up with three different kinds of Black Mirror episodes.

[SPOILERS AHEAD. While I’ve generally tried to avoid in-depth plot summaries, I do discuss the twists and endings for several episodes, so be warned.]

These are the episodes where the technology and society is more or less recognizable as the one we live in today. From a technology standpoint in these episodes, there’s nothing that technology couldn’t do given the right circumstances – the hacking in “Shut Up and Dance” is all too real, and while the master-hacker-arch-genius of “National Anthem” is a little over the top, there’s nothing that couldn’t be done at least in theory today. 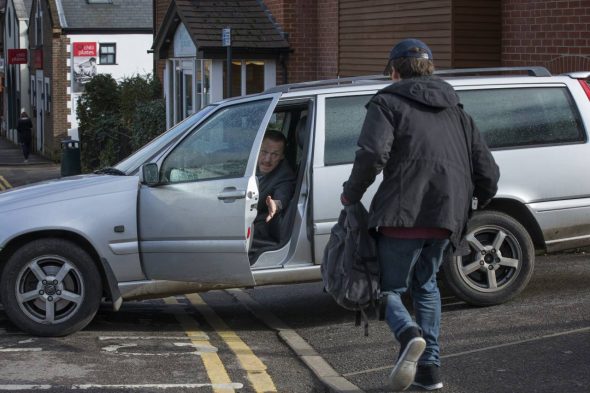 These stories, then, turn out to be much more about telling a twisted yarn that makes use of technology, without saying much about the technology itself.

Take “Shut Up and Dance,” for instance – it’s not impossible to imagine telling an almost identical story in the 1950s or even the 1850s. You’d have to mix up the details a bit, but “blackmail” has been around for as long as there has been people, and it would relatively easy to change the illicit-webcam footage to a hidden camera, or to a purloined letter. The text message instructions from a hidden tormenter could be replaced with paper letters left in strategic locations, etc. While the technology seems integral to the story, the darkness ultimately comes from the characters and the choices they make.

(*With this title, I’m cribbing shamelessly from Mallory Ortberg’s “Next on Black Mirror” piece for The Toast. I’m in good company though, given that so did the creator of Black Mirror.) 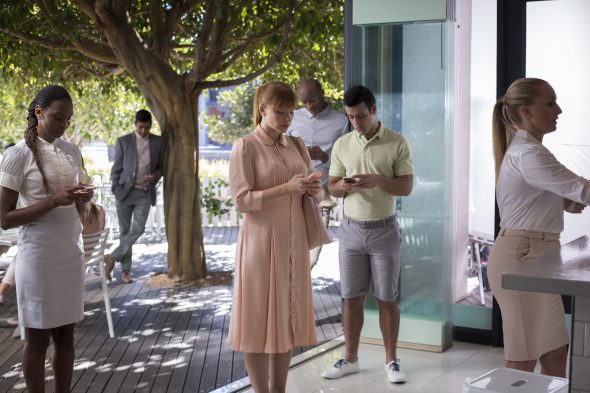 Here, we have technology that is either the same as we have today or close to it, but with some element of technology culture ramped up to 11.

“Merits,” for instance, clearly takes place in some sort of dystopian society, but all the technology is more or less recognizable – flat screens, exercise bikes and reality TV. The only thing that is changed is the degree to which that technology has assumed a central role in society.

Ditto “Nosedive.” While the contact-lens computer displays are not possible today, they are certainly on the horizon, and the 5-star-phone-rating thing is not only possible but already done in a variety of contexts (looking at you, Uber).

What these episodes do is try to tease out some negative element of our relationship to technology by extrapolating to its logical (or illogical) conclusion – if a society built ENTIRELY around likes/favorites/stars/meow-meow-beanz looks like [this horrible society where even Bryce Dallas Howard feels inadequate], then what does that say about our society which is built a LITTLE bit on those concepts?

“White Bear” is probably the odd duck here, both because it has the biggest gut-punch at the end, and because the ultimate target of the show’s argument is less obviously related to technology. Whereas “Merits” seems to take aim at a combination of reality television and corporate culture, and “Nosedive” targets the over-saturation of social-media, “White Bear” is arguably talking about something else entirely: society’s need for punishment of the guilty.

One can be forgiven for thinking that “White Bear” is about our obsession with technology – the early parts where all the “zombie” people seem to be filming with their phones without caring about the murders happening in front of them certainly seems to be making that argument. But the ultimate reveal undercuts all of this: they’re filming everything because they’re on vacation. They don’t care about the grisly murders in front of them because they know it’s all a stage performance! 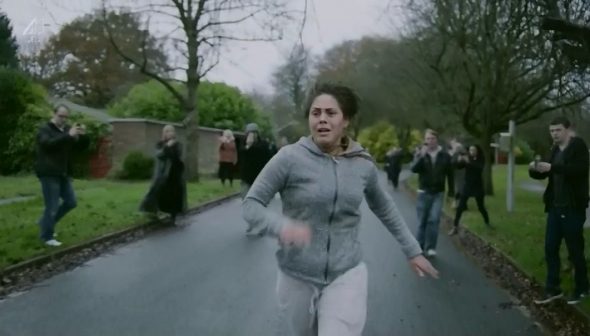 Instead, the gut-punch of the episode comes from asking the question – when is punishment enough? And why are we so fascinated by doling it out?

In any case, these episodes all take their power from amping up our use of existing (or close to existing) technology, and seeing what happens next.

3. Technology = Magic, and Also It is Bad

These episodes use technology that is so far outside the world of realistic possibility that it might as well be magic. In each case, the ability to either duplicate conciousness or create a perfect and seamless virtual reality, which might as well be Harry Potter: not only can we not duplicate your consciousness into a little computer the size of an egg, we don’t even have the basic scientific principles that would make this possible. 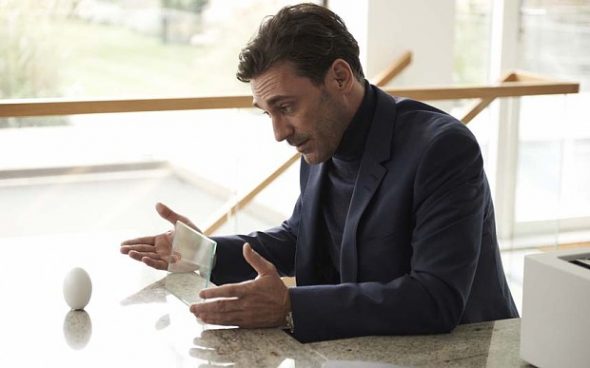 If you don’t believe me on this, consider the “OpenWorm” project, which aims to simulate the neural processes of a roundworm, which boasts a whopping 302 neurons and 95 muscle cells. This project is still being developed, and hasn’t actually been completed yet. By contrast, a human being has an estimated 100 billion neurons – so we’re talking a whopping 9 orders of magnitude separating the thing we can’t even do yet from the thing that these episodes purport to do with tiny consumer-grade electronics. Most of these episodes rely on technology that would require simulation at that level, creating a virtual consciousness with something approaching the complexity of a human brain.

That’s not necessarily a criticism mind you – nothing says a science fiction story has to be realistic, even if the world-building makes the world of the show look much like the world we live in everyday.

One thing to note is that essentially all of these episodes deal with the creation of an alternate reality or simulated version of an individual’s personality. This, I think, is because these episodes are ultimately much more metaphors for some other psychological impulse than they are parables about technology – “Be Right Back” isn’t asking “What if you could make a robot version of your dead husband?” because that’s not a very interesting question in the near term – it’s not like it’s going to happen any time soon. Instead, it’s asking “How do we move on after a tragedy?”

These episodes, I think, end up being the most philosophical, asking questions not so much about technology as they do human nature and what it means to be a human.

To be sure, these categories aren’t rigid, and technology is still a favored subject of Black Mirror. While “White Christmas” is a meditation on guilt and control, there is also a metaphor and critique of the echo-chamber of social media and the way we treat criminals; “Be Right Back” is not only about grief, but the specific way in which social media can interfere with the grieving process. At their core, though, these episodes are metaphors for larger philosophical issues more than they are cautionary tales or parables with 1:1 correlation to the real world.

3A: Technology = Magic, and also it is Good?

FINALLY I GET TO TALK ABOUT “SAN JUNIPERO.”

This episode is notable for two reasons: One, it is the best episode of Black Mirror (I will brook not dissent on this question), and two, it is also the one with the most up-beat message by a long shot.

The fundamental structure of the episode is not all that distinguishable from the rest of the Technology = Magic category. We’re not really even in the neighborhood of making something like San Junipero in the near or even foreseeable future. 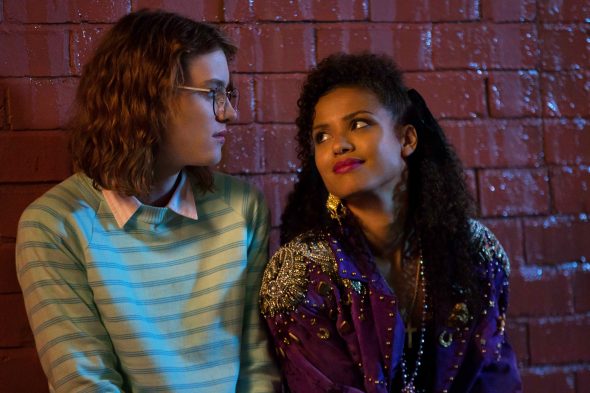 In conclusion, Black Mirror is more than just a one-note show about the perils of technology. By adopting an anthology structure, and by playing with the twin variables of technology and technology culture, the show is able to explore a wide variety of stories and characters.

2 Comments on “The Three Kinds of Black Mirror Episode”