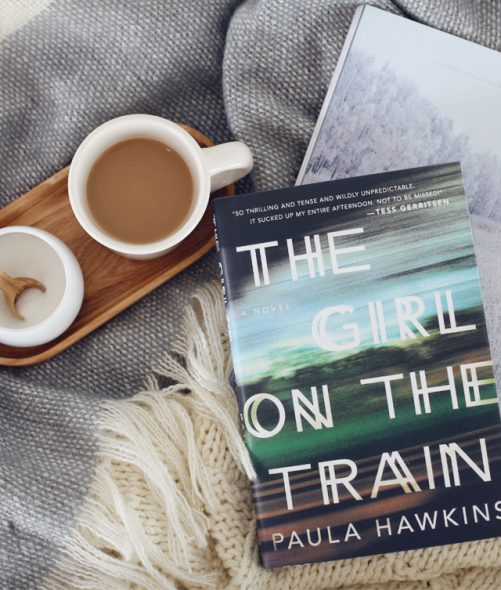 For those who have not read it (but statistically, you have probably read this novel, even if you don’t want to admit it (you know who you are)), The Girl on the Train follows the perspectives of three women: alcoholic sad sack Rachel Watson, haughty new mother Anna Watson (the second wife of Tom Watson, Rachel’s ex-husband), and Megan Hipwell, the tortured boho beauty whose disappearance sets the book’s central mystery in motion. None of the woman are perfect, or even necessarily likable-they all have complicated feelings, and are often ugly and fallible.  Rachel Watson, whose perspective is the primary perspective in the novel, is particularly difficult to like. She is an insecure alcoholic, a woman who is so emotionally pained, whose life is so dismal and barren, that she projects fantasy lives onto the people who she can see from her perch on the commuter train she rides daily back and forth between London and the outlying suburb where she lives.  By jumping back and forth in time, and shifting between the POVs of the three women, the novel gradually reveals the interior lives of the women and sets the scene for a satisfying twist ending.

Today the film adaptation of the novel arrives in theaters.  However, watching the official trailer may have left you as confused and disoriented as Rachel Watson after a serious canned gin and tonic spree.  Where the novel created complicated, ugly and fallible female characters, the movie trailer instead presents us with a bourgeois sexy disaffected catfight.

The trailer begins with Megan Hipwell (played by Haley Bennett) breathily telling the camera that she was once “described as the mistress  of self-reinvention.”  What follows is a montage of scenes in which Megan is always sexual and/or objectified by the viewer or the men in the scene with her; a shot of Megan’s taut stomach in Pilates class, Megan outside on her balcony in her underwear, oblivious (or titillated?) at the prospect of being seen, a shot of Megan lifting her skirt, another shot of Megan on her knees, sucking a man’s thumb (huh?). This montage of voyeuristic shots culminate with the crescendo of the soundtrack to the trailer-a slower, eerier version of Kanye West’s “Heartless.”  At the moment when Kanye sings that he “lost his soul to a woman so heartless”  we see Megan’s face, turning towards the camera, away from the anonymous male lover who has embraced her, and her face has the vacant affectless quality of glossy porn. Through all of these visuals, the movie trailer lays out a very flat role for Megan—that of the manipulative sexual temptress. The Megan of the novel has a more complicated interior life.  She feels stifled in her marriage, stunted emotionally and creatively bored as a housewife.  While the Megan in the novel has moments of cruelty and vanity, and is aware of and abuses her power as an attractive woman,  we as the reader at least get to understand her and hear directly from her, rather than objectify her from afar.  There is no room for interiority in the movie trailer, no sense of the feelings and motives behind the vacant expression.  It’s all creepy and ugly with no substance. 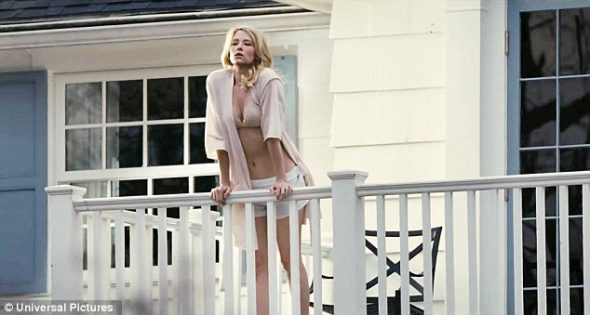 The trailer also gives us a narrow impression of Rachel, played by the phenomenally emotive and expressive Emily Blunt.  The trailer takes great pains to not only immediately establish that Rachel is unreliable and sad, but that she is potentially dangerous. In one scene, a cop asks her about her whereabouts the night of Megan’s disappearance.  When Rachel answers that she went to see her husband, the cop rejoinders “You mean your ex-husband?”—the first in a series of scenes meant to highlight Rachel’s supposed lack of credibility. In another scene, her ex-husband Tom pleads with Rachel to “stay away.” As the trailer continues, the same cop asks if Rachel murdered Megan and Rachel simply answers “no”— a moment which instills even more doubt in the viewer about Rachel’s reliability.  We can hear Rachel’s voice as she states “I am not the girl I used to be” over another series of establishing scenes.  The trailer ends with a question posed to Rachel, “Why are you here?”  Rachel, crying, whimpering in response to the question simply says, “Because I am afraid of myself.”  The trailer then cuts to a shot of Megan, naked, soaking wet, screaming, with the sound of a train piercing the soundtrack, and then to a last establishing shot of Emily Blunt, looking stoic and menacing on a Metro North platform. When Kanye West asks, “How could you be so heartless?”  the viewer is not entirely clear which woman is the heartless one—Rachel or Megan. 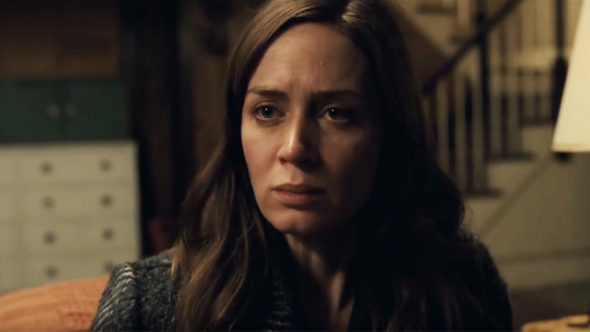 This portrayal of Rachel as secretly unhinged is as flat and misleading as the portrayal of Megan as a manipulative sexpot.  In the novel, it is revealed that Rachel’s marriage to Tom deteriorated in part as a result of the stress of trying and failing to conceive, which in turn led Rachel to drink heavily.  Rachel carries this loss and grief with her, along with a sense of shame and regret about the her role in that loss.  It is her deep insecurity and self-loathing, the uncertainty with which she carries herself, along with her near constant drinking, which creates the impression that she cannot be trusted as a narrator.  The Rachel in the novel is creepy, needy and inappropriate, but also a likable and empathetic person in great pain.  There is no lingering sense that Rachel carries some deep-seated malice, ready to boil over to the surface, because a person who hates herself that much is unlikely to turn that hatred outward.  Rachel is a desperate person in pain who cannot trust her own feelings or judgment, but it doesn’t necessarily make her capable of being malicious.

But what the trailer really glosses over is that as Rachel stumbles through her life, messily processing her feelings as she entangles herself needlessly into the mystery of Megan’s disappearance, she goes from a girl doubting her feelings, her memories and perceptions, to a woman who is certain and secure.  It is Rachel’s gradual certainty and the assuredness in her perspective that ultimately allows her to solve the mystery of Megan’s disappearance.  She stops allowing herself to be second guessed and undermined by the world around her (and in the process, stops undermining herself through alcohol).  It is a positively feminist story arc—woman stops hating herself and starts hating the patriarchy.  And yet, if one were only to watch the trailer, you could be excused for believing that The Girl on the Train was about a dour brunette hurting a sexy young blonde, because you know, psycho-sexual jealously or something. Instead of asking why a woman could be so heartless, maybe we should be asking how a trailer could be so reductive.

3 Comments on “Cat Fight or Gaslight? The Bizarre Marketing of The Girl on the Train”