John Perich:  Is there a point in the pop culture timeline at which Computers stopped being “magic machines that can do anything” and started being “complex devices”? Or, if not a total switchover, at least a shift toward the more realistic end of the spectrum?

I’ll give some examples: in the 60s, 70s, and 80s, there were lots of pop culture computers that can do things that computers today still can’t do. Obvious examples include HAL from 2001: A Space Odyssey, Colossus from Colossus: The Forbin Project, and KITT from Knight Rider. 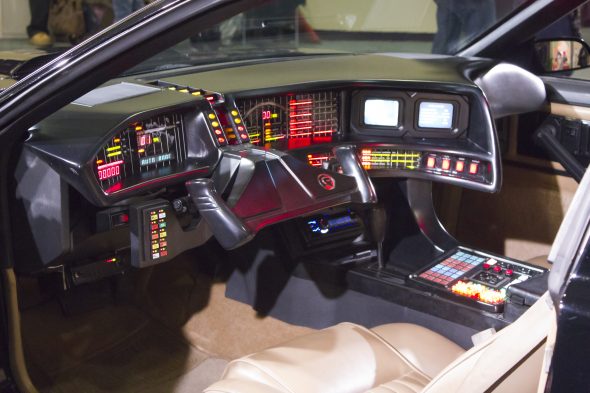 Hell, even an episode of Miami Vice featured a supporting character who, as a throwaway gag, had a computer that could supposedly predict crime. That wasn’t even the crux of the episode – it came up in about two scenes, if I remember right, and was never brought up again. (It was “Out Where The Buses Don’t Run”, for the Donjohnsonologists among us).

I feel like those sorts of computers – that can have conversations with people – are becoming less prevalent in pop culture. Computers are still capable of scary and amazing things, but the magic word today seems to be “algorithm”. And you’ll still see AI in the occasional sci-fi thriller, but you wouldn’t see it on, say, Modern Family, whereas I’m pretty sure Urkel built an AI on Family Matters at least once.

(Go ahead and dig up the AI episode of Modern Family and prove me wrong).

(1) Is this hunch I have – that computers are becoming less fantastical in pop culture – valid?

Jordan Stokes:  “Speculating about the zeitgeist. A strange game. The only way to win is not to play.”

Another point in favor of your thesis: in that episode of Futurama where they end up on a planet run by a computer — actually a fembot pretending to be a femputer, trapped in a manbot manputer’s world — it felt like a parody of an older strain of sci-fi.

It’s very hard to imagine that the new Star Trek show is going to have much use for a planet run by a computer, but there are something like four episodes of the original series that do some variant on this plot.

So you’re placing the divide at the end of the 80s, yeah? I wonder if William Gibson’s Neuromancer is some kind of a watershed case: on the one hand, Wintermute has a lot of the traits that you see in those earlier computer villains. It orchestrates a massive conspiracy, for one thing. And there are scenes where it, like, sits down and talks to people, as it were. But on the other hand, it doesn’t act much like a person at all. Its goals are mostly inscrutable, and you never get the sense that you are seeing the whole shape of it. 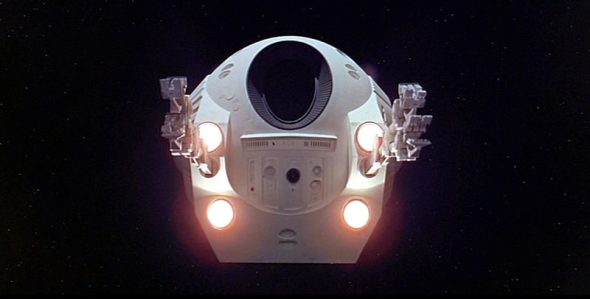 Whereas with HAL, although you don’t really know why he’s doing things, you pretty much get that the scope of his plan stops at murder. And he has a physical body that you can swim around in and dismantle.

So here’s a thought. What if the kind of asshole-supercomputer that John is talking about, is basically an update on an even earlier, even hoarier sci-fi trope: the killer robot. The computers have a central drive somewhere, and they have human-like personalities, but they don’t have human-like bodies. You can’t run away from them in the same way that you can run away from Gort, or from the T-1000. They tend to control the environment, or even to BE the environment. You’re stuck in a house somewhere, the house is run by a computer, and the computer hates you.

But around the 80s, around the time of Neuromancer, you start getting the Internet. Which is even less physical, even more enveloping. You can break out of the asshole supercomputer’s death house, but where do you go to run from the Internet? So it’s robots:computers::computers:Internet, and the rise of the Internet in popular culture explains the concomitant fall of the all-powerful bastard CPU as a science-fiction figure worth bothering with.

(Its replacement, of course, is the L33T H4XX0R — which again is basically an invention of Neuromancer.)

Would we have put up with The Net if Sandra Bullock was being menaced by an AI? I think not. (I mean, we barely put up with The Net in the first place.) But somehow a conspiracy of jerkface computer USERS is a more palatable/believable plot device, nowadays, than a computer that offers a flawless digital emulation of jerkiness. 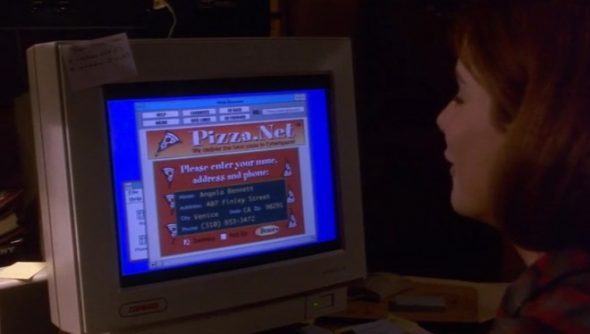 Peter Fenzel:  You guys definitely seem on to something. I’d suggest that a big part of it is that computers, A.I. and the Internet gone from this thing that other people used and we interacted with sometimes to something that has really palpably changed our lives, often in ways we don’t like, that make us feel like we’ve lost control of ourselves. So you can make a movie like Her, but not a gritty reboot of Small Wonder.

It’s worth noting that Jarvis from Iron Man was an exception (and an outdated one), but now he’s been transformed into a weird simulation of a person that is as more unsettling than R2D2-ish. There is BB-8, but he’s also I think an exception. And also his story can be pretty bleak and sad compared to R2-D2s. Maybe?

It is so weird there is no recurring robot buddy or thing like it on Big Bang Theory, since it’s all riffs on nerd characters who historically had robots or talking computers. There isn’t, right? Sara says there isn’t.

Stokes:  That would be a hell of a reveal, if in the season finale Sheldon pulls his face off to reveal a mass of circuit boards. So I guess this is partially just a question of familiarity breeding contempt?

We know computers too well to be overawed by them? In a world of Waze, does KITT becomes unimaginable? (Although KITT is also a car that does things cars can’t do today, so maybe that’s not totally dependable.)

If I think about the way that my computer has palpably changed my life in ways that I don’t like, though, I think of two distinct phenomena. The first is the computer being weak, mainly by breaking and forcing me to buy a new computer. I think of that as a thing that the computer does.

The other is the computer being strong. But this is rarely actually the computer’s doing. It’s Facebook futzing around with my privacy settings, in which case I blame the corporation. It’s me compulsively staying up until 4AM reading tweets, in which case I blame the overflowing deluge of content provided by what is, in effect, a massively parallel array of comedians and pundits. (And myself. Let’s not forget blaming myself.)

So it’s weird for me to imagine an overwhelmingly powerful computer, because computers can’t even stand up to a half-glass of spilled iced coffee. But I have no problem imagining that a complex social organization of some kind — a corporation, a social network, a faceless government bureaucracy, any given organized religion — would turn out to be the literal devil.

John:  “Familiarity breeding contempt” is where I think I was headed. Computers are no longer as wonderful – in the literal “instilling wonder” sense – as they were in the 20th century. We still know that they’re capable of wrecking or transforming our lives, but we no longer assign that property to The Machine. We assign it to, as Stokes says, the institution that controls The Machine.

My point is: the tech bubble bursting instilled a new consciousness of capital in all of us, and the working class and the employing class have nothing in common. Except for racism!

Ben Adams:  OK, I’m going to be the fly in the ointment: I’m less convinced that we have actually changed that much in the over-the-top powers we ascribe to computers. Sure, we’ve moved beyond the truly “magic” Weird Science world where you can literally create life, but I think there’s a still a pretty strong streak of artificial-intelligence-as-magic.

The best recent example is Eagle Eye, where a malevolent AI tries to take over and does all sorts of ridiculous stuff. Ultron fits this mold as well – he’s a computer AI that gains sentience, and from there everything might as well be Harry Potter.

I think our experience with computers might actually cause us to overestimate what computers can do – the average person’s experience with a computer is a fundamentally sanitized experience, crafted by the finest minds that can be found in such diverse places as Cupterino, CA, Mountain View, CA and Menlo Park, CA.

As a result, I think most people see things as plug-and-play, point and click, etc. Which makes us think that everything involving computers must be like this! So you can have a scene in Eagle Eye where a computer takes control of a drone sitting in a hangar and start flying it around and launching missiles at people, and people think “Yep, that makes sense.”

John:  I remembered Eagle Eye when I was raising this, but I sort of forced myself to ignore it. I don’t know why. Didn’t that Jamie Foxx / Jessica Biel fighter pilot movie also have a malevolent AI?

Maybe what I’m feeling is that there’s a wider variety of “computer trouble” possible in pop culture now. I feel like “human malevolence” or “technical incompetence” are far more prevalent tropes re: computers than they were 30 years ago. But maybe it’s my faulty memory. 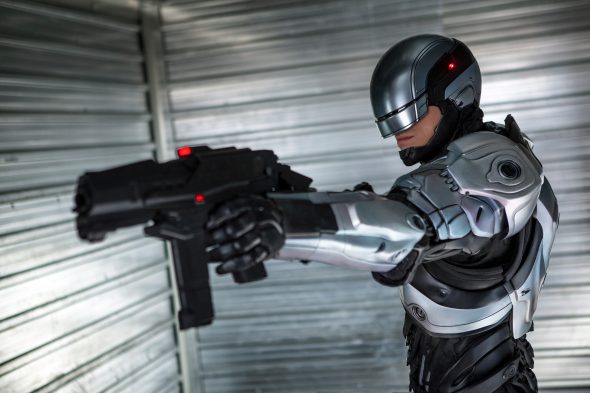 Fenzel:  Eagle Eye, Stealth, Swordfish, and Live Free or Die Hard were all also like 10-15 years ago.  (Eagle Eye was only 8.) There have been a ton of more recent movies with drones in them in one way or another, like the RoboCop reboot.

Matt Belinkie:  Avengers: Age of Ultron was about a rogue genocidal A.I. But on the other hand, Furious 7 was about the good guys getting a surveillance program that can find anyone, anywhere. It’s eventually used against them by the bad guys, of course, but for the most of the movie they’re trying to get it for the US government and nobody questions whether it’s a good thing.

In 2008, when The Dark Knight introduced almost the exact same technology, Morgan Freeman threw a big hissy fit. I wonder if in the year 2016, we’re so jaded about digital surveillance that we take it for granted the government has that technology. There’s no moral animus or fear about it.

Maybe the relative lack of movies about the perils of digital technology is the dog that didn’t bark. That is, you’d expect that to be one of the central themes of popular cinema, except that Hollywood either is in awe of Silicon Valley or doesn’t want to piss it off. Way back in 2001, there was a movie called Anti-Trust about a Bill Gates like figure spying on people in order to expand his empire. That movie seems very ahead of its time. Google was barely a thing back then, and “the cloud” hadn’t been coined. That movie should be a slam dunk today, but maybe no studio feels like making a movie that pisses off the startup crowd. 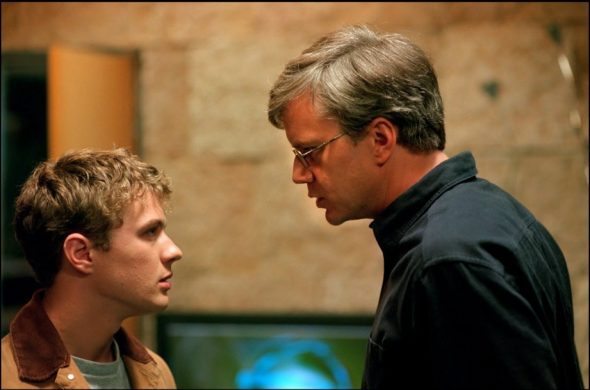 Silicon Valley the TV show gets in some good shots but it’s basically sympathetic towards programmers and entrepreneurs.

Ben Adams: To bring things full circle, Jordan asked why it seems like computers have become less fantastical over the years.

7 Comments on “What Happened to all the Evil Robots?”